The week before Thanksgiving, a wall of concrete-form panels started to rise along the north side of the Bonney Science Center, facing Campus Avenue.

It’s a wall of forms that will form a wall, if you will — a temporary structure, the first of several, to be used in constructing the science center’s permanent three-story exterior walls. That wall work, plus the subsequent placement of interior structural steel and floor slabs, will dominate Bonney construction this winter.

One story tall, the heavily braced form panels first appeared near the corner of Campus Avenue and Nichols Street. Since then, they’ve been extended more than halfway along the building’s north side. A few more stand independently at the facing corner, at the southeast.

Long wooden props support the panel wall on the inside. Also on the inside, the “rodbusters” of Bill Dixon Rebar & Prefab of Portland, Maine, have been weaving a dense matrix of steel rebar to reinforce the future concrete. Hung at intervals are wooden frames, so-called knockouts, that leave rectangular voids in the concrete as it’s pumped into the wall forms. Those will be window openings. 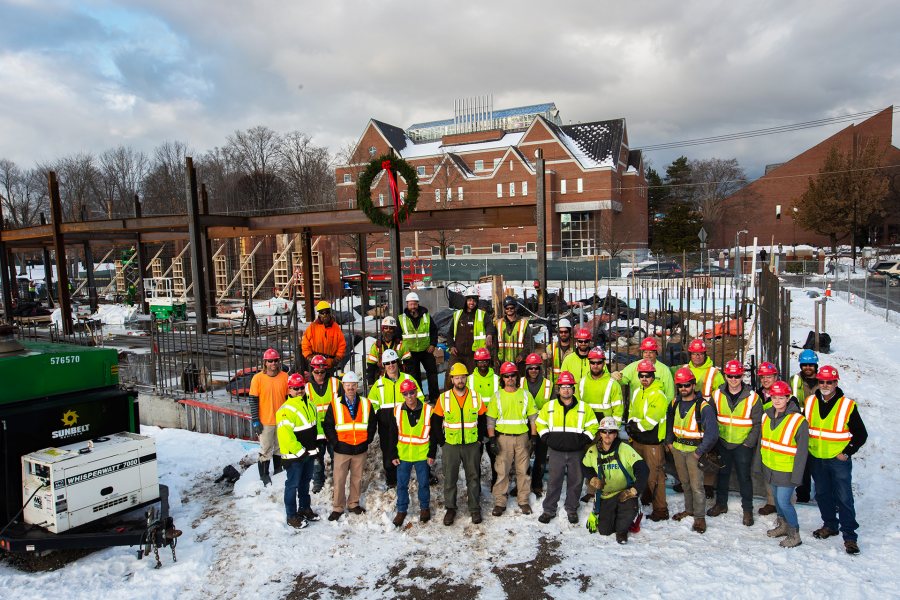 When the entire setup is ready for its concrete filling, the knockouts and rebar will be sandwiched between an outer layer of panels, in place as this is written, and an inner layer whose setup began this week. (One of the rare instances of standing a sandwich on its side with no regrets.)

So when will the concrete start to flow? That happened this morning, actually. The objective for this phase is to build a wall one story high that wraps approximately halfway around the building footprint — what the construction team calls the A-side, involving three surfaces: much of the north face, the narrow east or Nichols Street end, and part of the south side.

Then, perhaps around the turn of the year, steel workers from Davis Erectors, Sainte-Marie, Quebec, will place floor joists connecting the new wall sections. Meanwhile, the Dixon rodbusters and concrete form assemblers from Consigli Construction, which is managing the Bonney project overall, will begin the prep for the remainder, or B-side section, of the first-story wall. 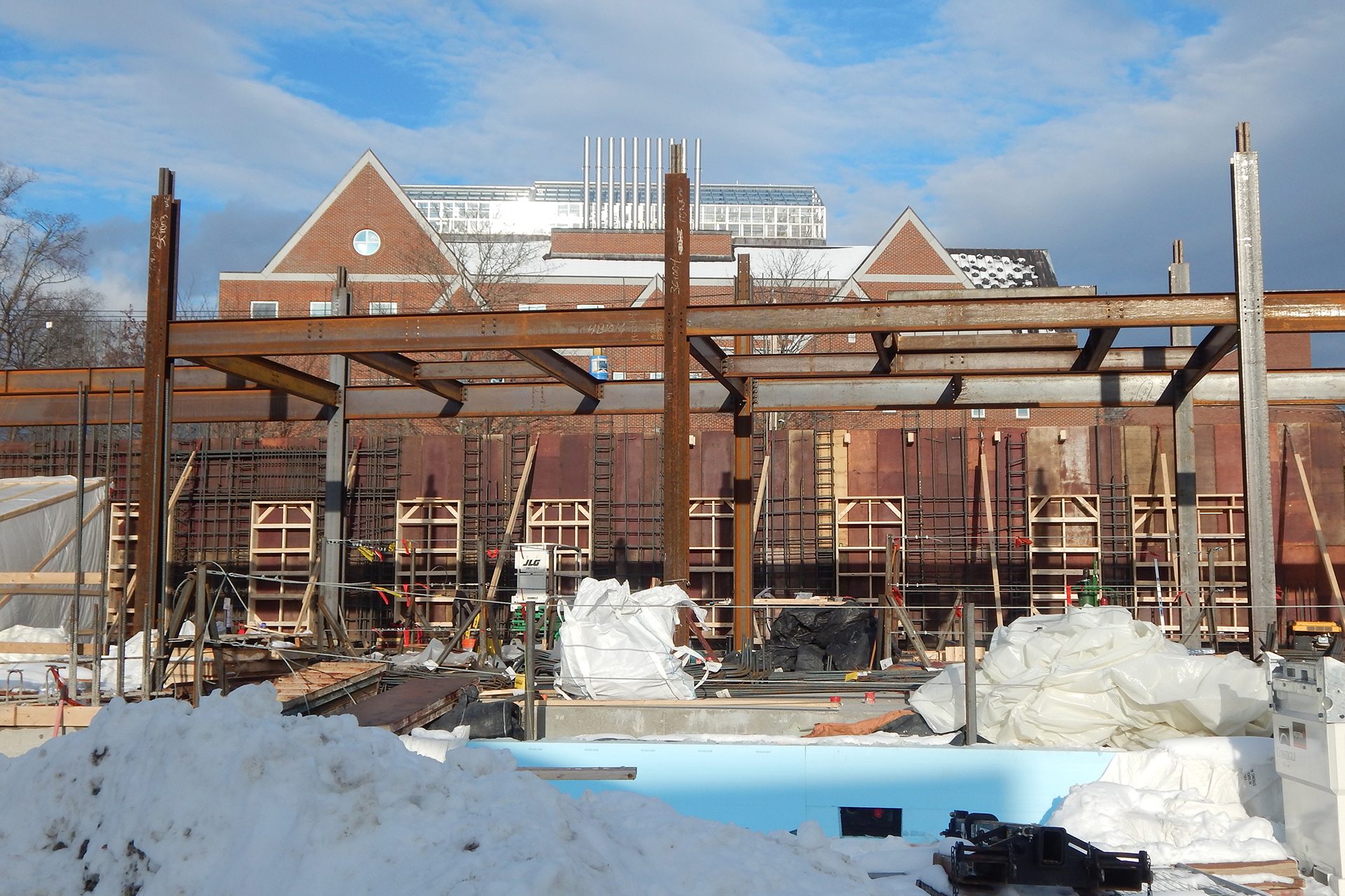 The state of things at the Bonney Science Center in early December 2019. In the background is a wall of concrete forms hung with rebar and window knockouts. Structural steel dominates the image. Showing at the bottom is blue insulation protecting the foundation wall. (Doug Hubley/Bates College)

Once that’s placed, the steel workers will shift their focus there and the concrete crew will move back to the A Side to prep for the second story. And so it will go, concrete and steel taking turns, until the walls stand three stories high.

“The critical path really goes through those walls right now,” says Chris Streifel, the Facility Services project manager overseeing the Bonney Science Center for Bates — “critical path” referring to the operations most important to keeping the project on track.

Got no pills for this chill: Around eight inches of snow fell on the Lewiston area Dec. 2–3, but symptoms of winter were evident on the science center construction site weeks earlier.

Human-made symptoms, that is. Joining the acres of poly sheeting that holds wind and moisture at bay are heavy industrial blankets that keep new concrete warm enough to cure properly.

And portable gas-fired heaters have been in use on site since mid-November — a colder-than-normal month whose lowest high temperature was 23 degrees, although highs in the 30s and 40s were more typical. Taking their fuel from the Unitil gas network that feeds Lewiston, these devices blow warmth into the Bonney basement through big flexible ducts. 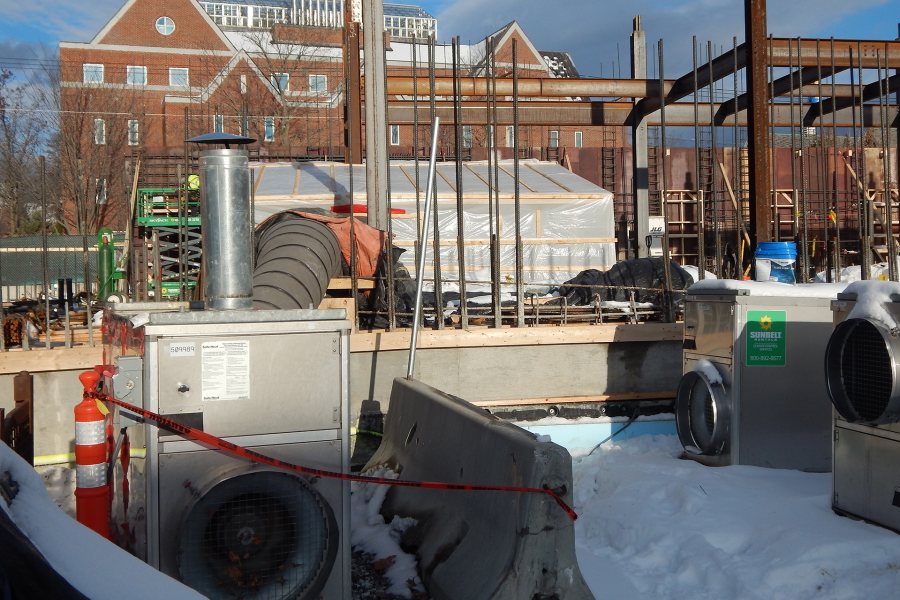 Three space heaters at the science building. The one at left is in service, pumping heat into the basement through a flexible duct and the plastic-shrouded headhouse. (Doug Hubley/Bates College)

The duct from one such heater enters the basement via a temporary hut made of wood and plastic film, conspicuous on the first-floor slab at the Nichols Street end.

This structure, which would be called a headhouse if it were permanent and provided access to a subway station, also shelters stairs going into the basement. During a Dec. 5 visit, we used these for a quick inspection.

We enjoyed looking up at the colored plastic housings of the many Bang-Its poking through the bottom of the floor decking overhead. Used to both mark future utility installations and provide a fastening point for those installations, Bang-Its are inserted through holes in the decking before concrete is placed and seated by a blow (hence the product name) from one’s boot or a hammer.

The colors indicate what kind of service goes where: blue for plumbing, red for electric, green for HVAC, etc. 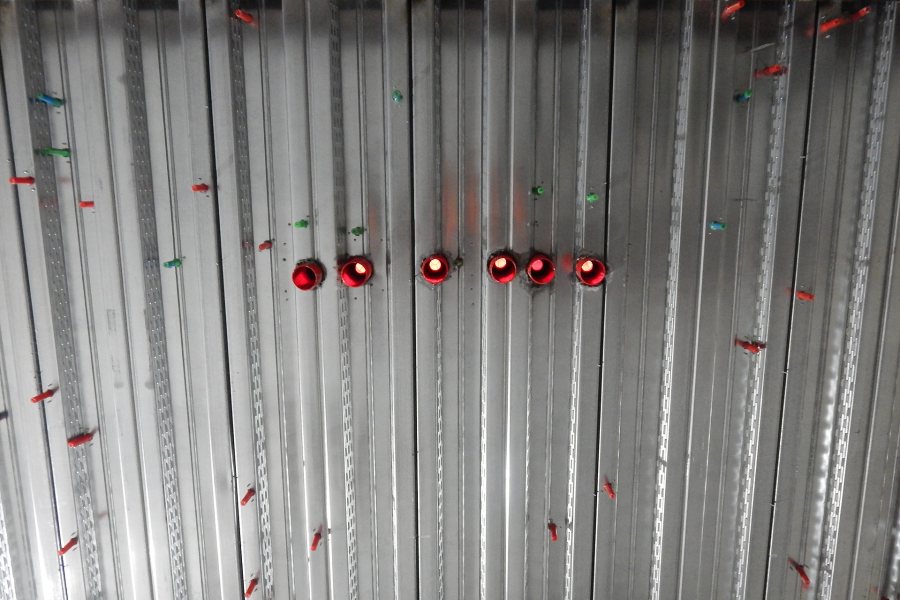 Other than the visual fascination provided by the Bang-Its, the basement was less busy than during our look-see in late October. That’s largely because this space, though covered by the first-floor decking and slab, isn’t yet watertight. There are a few things to do, such as filling in around the bases of load-bearing steel columns with concrete, but any chores at this point need to be “water-friendly,” Streifel says.

“Until we get that area dry, we can’t really start a whole lot else,” he says. The basement should be waterproofed by February.

Another process happening below ground level, though outside the basement, brings us back to the topic of warmth vs. cold and to something called an earth heater. Made by Ohio manufacturer DryAir, the Greenthaw earth heater at the Bonney Center is conspicuous because of its size — roughly that of a one-horse trailer.

Ample lengths of hose filled with liquid heated by the Greenthaw are spread out on patches of earth that need to be warmed for whatever reason. When we visited the site on Dec. 5, for instance, Greenthaw hosing was deployed at the bottom of the science center’s big air intake — aka areaway — in conjunction with pumps that were removing water, kept from freezing by the earth heater. (Overnight low temperatures ranged from 6 to 26 degrees that week.) 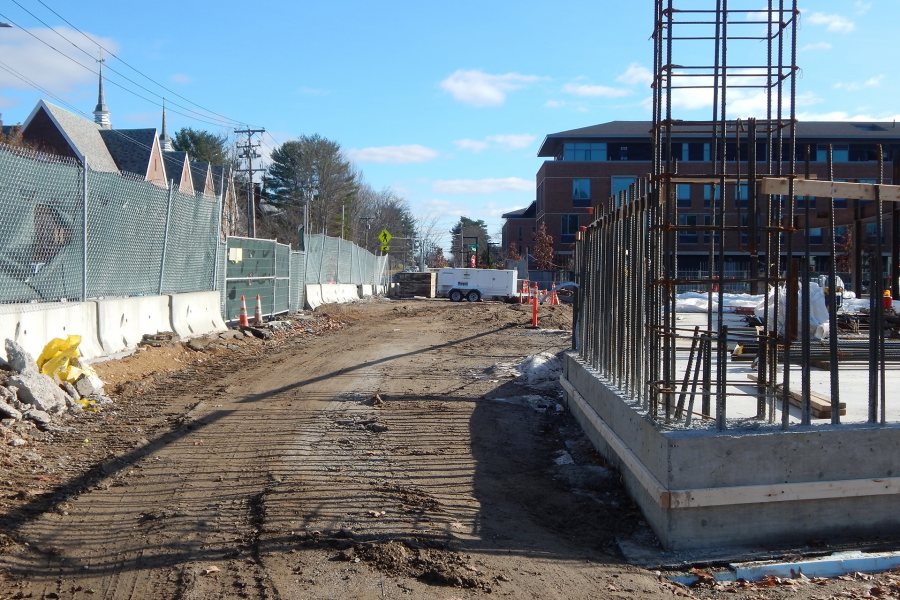 Part of November’s progress at the Bonney Science Center was backfilling that buried the foundation walls, as well as the steel sheet piling that kept the foundation hole open early in the construction process. The white trailer is a space heater. (Doug Hubley/Bates College)

Speaking of the areaway, its outer wall — the building’s last deep section of foundation — was placed in mid-November. Also in that month, backfilling around the outside of the foundation was completed; and, after weeks of providing overflow space for steel and concrete operations, Bardwell and Nichols streets next to the Bonney site were re-opened to traffic. Streifel notes that while short closures are likely, we’ve seen the last of such long shutdowns for the next few months, at least.

Electrofusion: The two dozen or so workers on site Dec. 5 included several from the Portland firm Warren Mechanical. They were occupied at the Bardwell Street end of the building, where the foundation walls were completed the week prior to Thanksgiving. (The equivalent foundation walls near Nichols Street were done in early November.)

In anticipation of the placement of the slab-on-grade foundation, the Warren plumbers and pipefitters were finishing up two quite different installations. (The slab was placed Dec. 11, largely encasing the Warren work in concrete and, incidentally, completing the first-floor slab.)

One installation was not unusual: A profusion of vertical pipes, aka risers, that stuck up out of the medium-brown soil. Some of these will provide domestic water and others will carry away septic waste from a gang, i.e. multi-user, restroom. (Frankly, we think gangs should remember to go before they leave the house.) 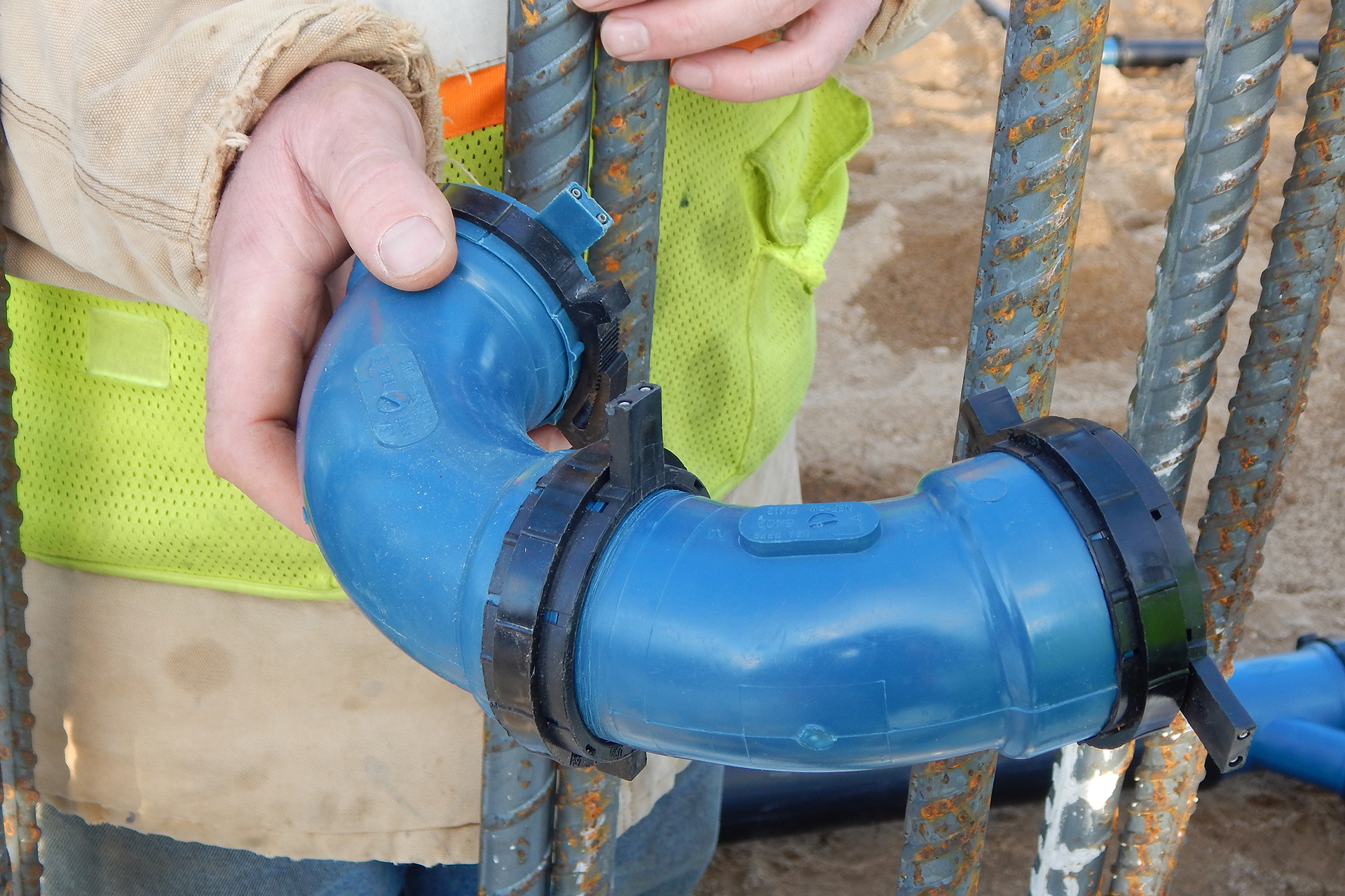 The other installation was new to us. The plastic piping that workers were laying out in patterns on the ground are specifically for the handling of chemical waste, and the pipes are made of an acid-proof plastic.

The really neat part was the means of connecting the black-and-blue pipes, which is a process called electrofusion. Once the mechanical joint is made, an electrical current is fed into it via a plug-and-socket arrangement. The electricity causes the pipe threads to melt and fuse together, much like Campus Construction Update’s nerves after a dose of the evening news.

Can we talk? Campus Construction Update welcomes your questions and comments about current, past, future, and current construction at Bates. Write to dhubley@bates.edu, putting “Campus Construction” or “Despite all your fine talk, that 8-foot ladder is nothing special” in the subject line. 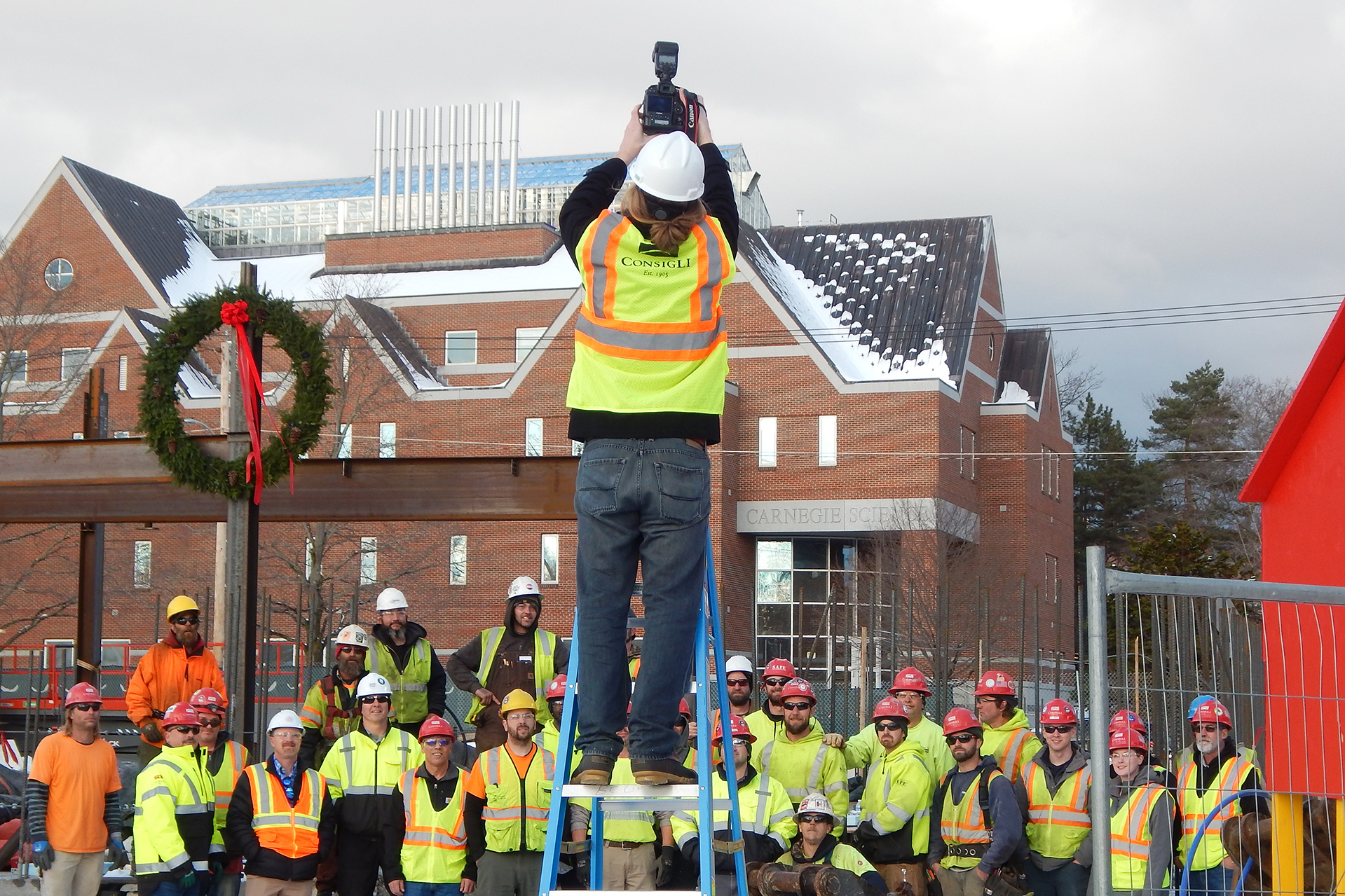 Multimedia producer Theophil Syslo puts the Campus Construction Update ladder to good use on Dec. 5 as he photographs a wreath and workers at the Bonney Science Center. The image was presented to Michael Bonney ’80 and Alison Grott Bonney ’80, whose family foundation made a gift that is anchoring the building project. (Doug Hubley/Bates College)