When Jane Costlow arrived at a buffet luncheon on the second floor of Commons earlier this fall, she was hungry in more ways than one. For a meal, yes, but also for a chance to learn about her future.

Organized by two recently retired professors, Margaret Creighton and Leslie Hill, the regular lunch gathering gives emeriti faculty and those approaching retirement, such as Costlow, a chance to share ideas about how they might enrich their post-pedagogical lives. 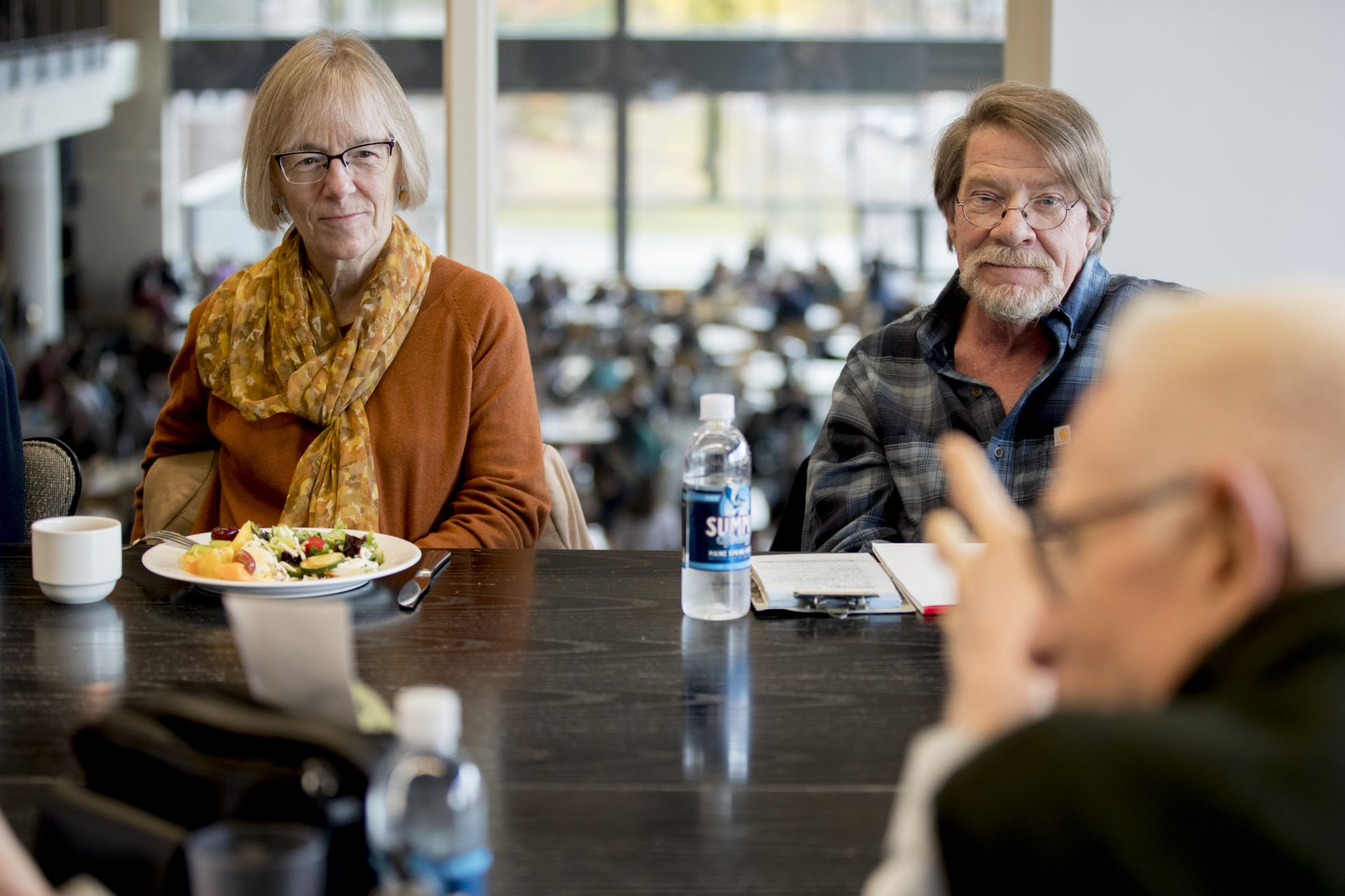 “The folks who are organizing this are wonderful and generous” with ideas about post-retirement opportunities, Costlow says. Yet, she later admits, attending the lunch felt a bit premature.

“I’m not thinking too much beyond next week, actually. I have a lot of commitments in the community already, so I don’t know whether I’ll be looking for additional new connections or venues through Bates or heading in different directions.”

As Costlow’s fall 2019 semester concludes — her penultimate full semester as a Bates faculty member and as the college’s Griffith Professor of Environmental Studies — next year still seems like a long way off. She has grading to attend to, as well as planning for the winter semester and for Short Term, plus research and off-campus obligations that further fill her schedule.

Join us as we follow Jane Costlow — esteemed Bates teacher, scholar, and colleague — month by month during her 34th and final academic year.

Though it’s clear that these last few weeks represent the beginning of the end of her 34-year career on the Bates faculty, Costlow is still experiencing some firsts.

Take, for example, her presence at the annual Trashion Show in November. Organized by student EcoReps and held in the Gray Athletic Building on Nov. 20 during Harvest Dinner, the event features students modeling outfits made from campus trash as a way to raise awareness of the amount and variety of waste Bates produces.

Invited by students, Costlow joined Associate Dean of International Student Programs James Reese and Dining Services staffer Flo Laflamme as this year’s contest judges. Costlow had never attended before, but immediately fell under the show’s spell. “As the weather gets gray outside, I love these big indoor events. It’s kind of a nice community feel,” she says. “And the level of creativity and enthusiasm on the part of the students is just great.” 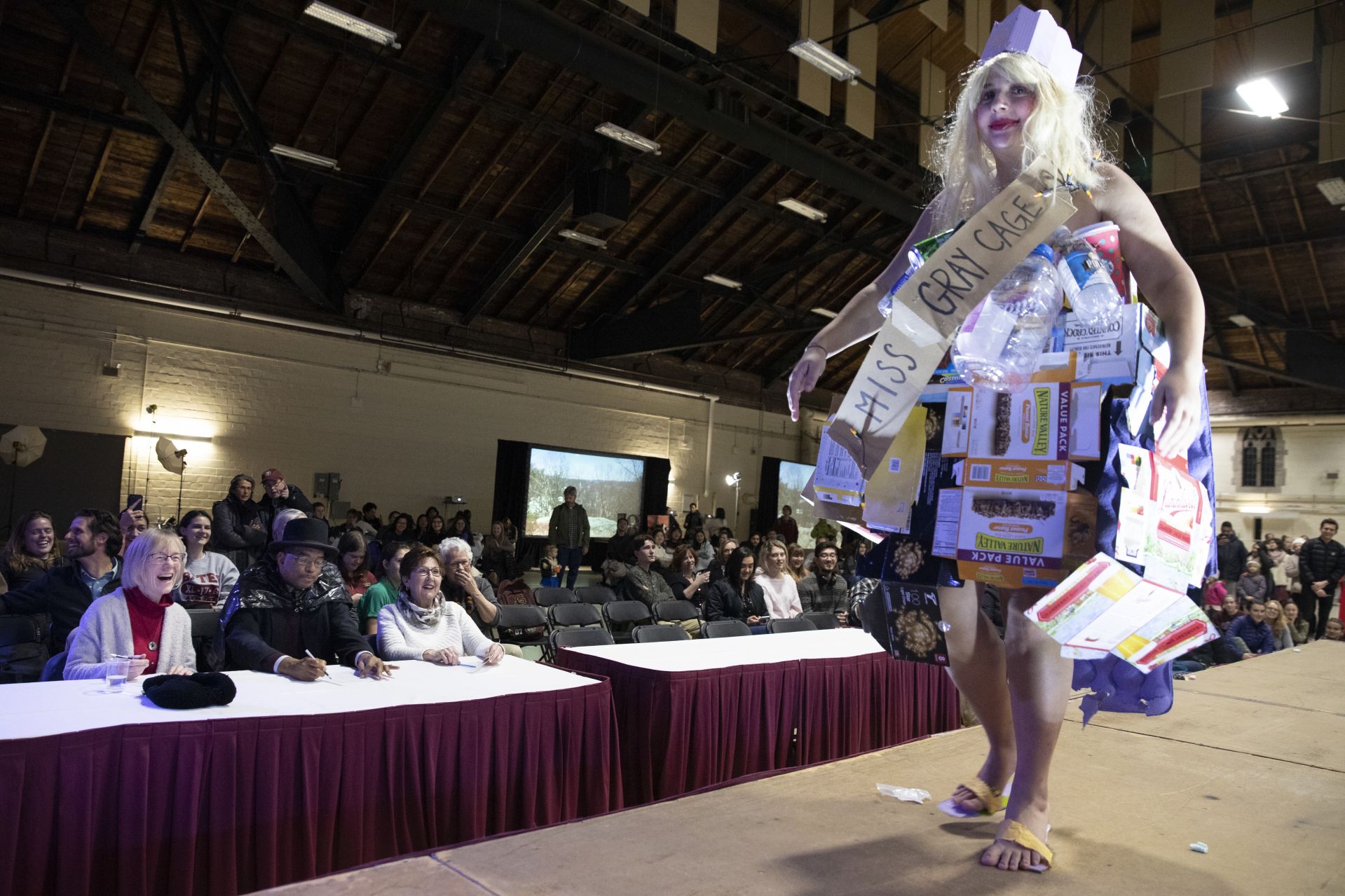 Costlow, James Reese, and Flo Laflamme, judges at this year’s Trashion Show, react to a walk down the runway by model Eden Rickolt ’20 of Landenberg, Pa. (Phyllis Graber Jensen/Bates College)

This extracurricular experience reinforces her belief in the value of experiential learning. “I love the kind of surprise that can happen when you go out into the world and encounter things differently,” she says.

Such was the case on Dec. 5, when Costlow and students in her “The Question of the Animal” course went on a birding excursion to Lewiston’s Thorncrag Bird Sanctuary, led by Nick Lund of Maine Audubon, who had visited the class a few weeks earlier.

The excitement in the woods was already palpable when Lund suddenly called out: “Follow me!” He had just spotted a pileated woodpecker, nearly the size of an American crow, atop a towering tree in the distance. 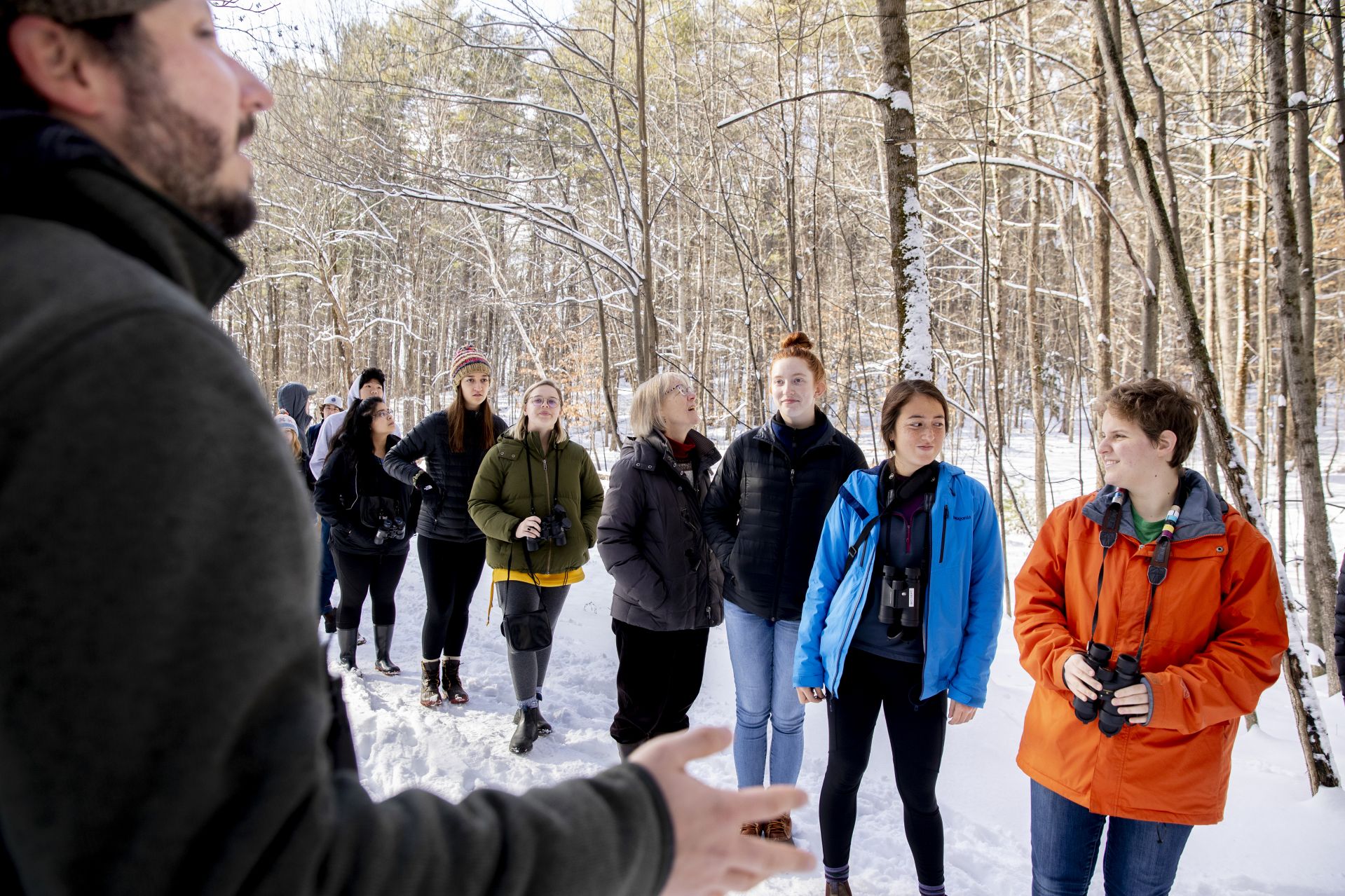 Nick Lund of Maine Audubon demonstrates how birds communicate with each other during a walk in the woods with Costlow and her students in the Thorncrag Bird Sanctuary. (Phyllis Graber Jensen/Bates College)

Costlow, who has led generations of Bates students on academic trips to Russia, adores getting everyone out of the classroom when she can, whether in Lewiston or abroad. “There’s something about the constraints of sitting in chairs, even if they’re in a circle, that can really have a suppressive impact on everybody.”

And the woods offer especially wonderful opportunities for mindfulness, says Costlow, whose publications include the book Heart-Pine Russia, which explores the power of forests in Russian culture and history.

She says, “We rarely ever pay attention to only one thing at a time.” A slow walk in the woods offers time for attention — to really focus on the woodpecker, or the deer tracks, or the sounds of birds communicating with each other. That, says Costlow, is “fabulous.” 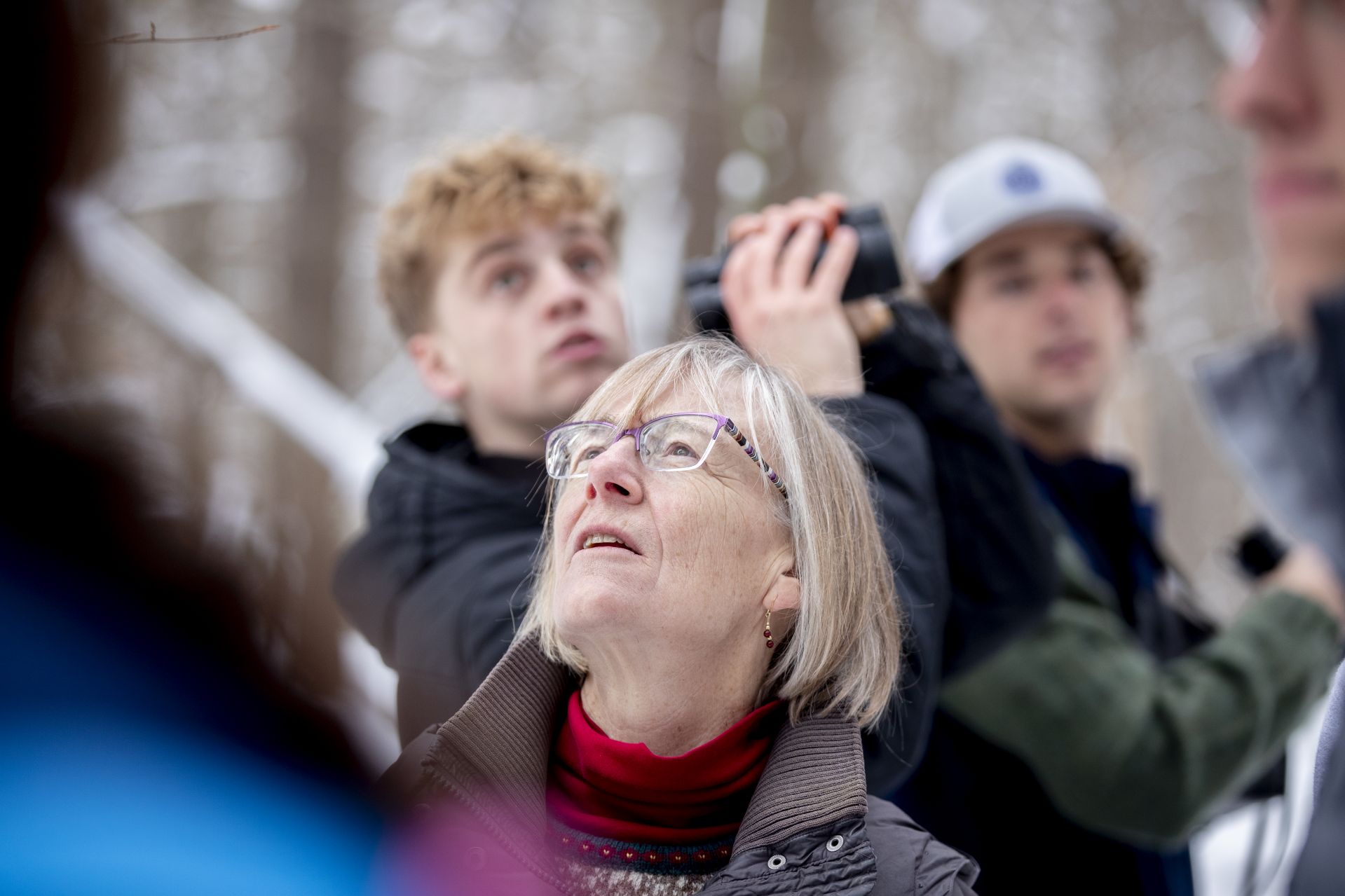 Like other Bates professors, Costlow keeps many plates spinning simultaneously. Environmental studies is particularly busy as one of the five most popular majors of the 36 that Bates offers. Until about a decade ago, the program typically attracted about a dozen majors each year. Interest surged in the 2010s, and today the program supports more than 30 majors annually (33 in 2019).

It’s not a coincidence that the ES program has grown alongside students’ awareness of global climate change. “They want to develop some kind of language for their feelings of concern and worry,” Costlow says. “But they also want to learn about the ways that they can address that in their future lives, whatever they end up doing.”

The program’s end-of-semester poster session is a case in point, as seniors filled a Hedge Hall classroom to present their research to professors inside and outside the program, as well as friends and visitors.

For two hours, Costlow and her colleagues work the room: asking questions, hearing what students have to say, and providing feedback. “They’ve got this fabulous energy,” she says, which makes it fun to feed off the students’ excitement about the topics in which they’ve become expert during the semester. The students don’t just possess new knowledge: Most also excel in communicating their expertise. “They can tell a story about it in a way that whoever comes in and asks them a question can get something out of it.”

As the session concludes, she’s feeling beat. “Wow! This is what students probably feel like at the end of a couple of lectures when they go to classes all day long.”

Once she stops teaching, Costlow realizes, such day-to-day conversations with students, exchanges filled with curiosity and excitement — whether about research, an interesting movie or book, or a walk in the woods — will mostly disappear. She won’t have three or four students in an afternoon entering her office to talks about papers, theses, and their lives.

“I’m really going to miss having that chance to talk with students, that good, good conversation,” she says. As do other professors, Costlow keeps in touch with former students through email and by writing letters of recommendation, and she looks forward to continuing those relationships. 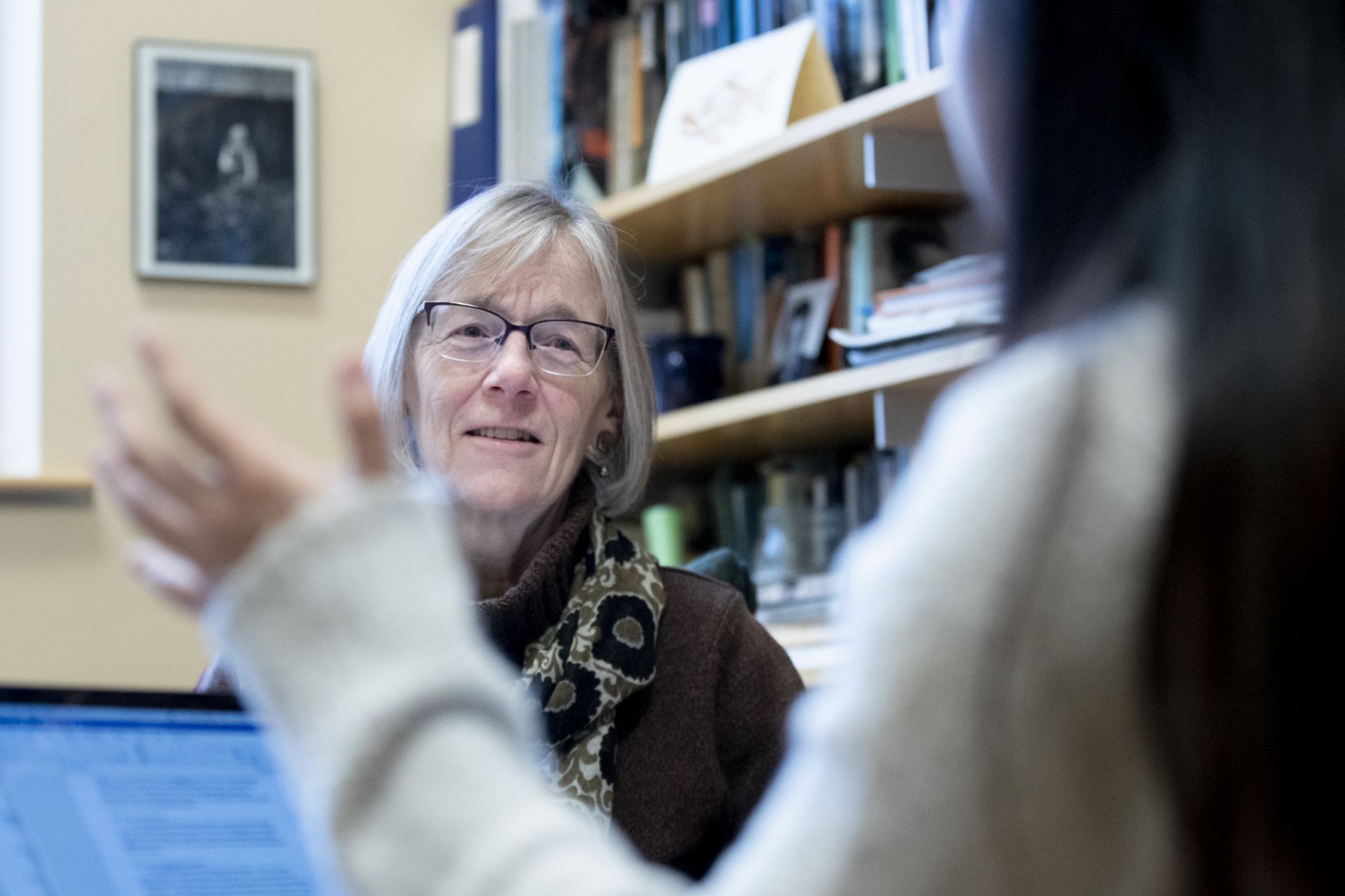 In her Hedge Hall office, Costlow meets with Azusa Okada ’21 of New York City, a student in her “Lives in Place” course, to discuss a nature photography project planned by Okada. (Phyllis Graber Jensen/Bates College) 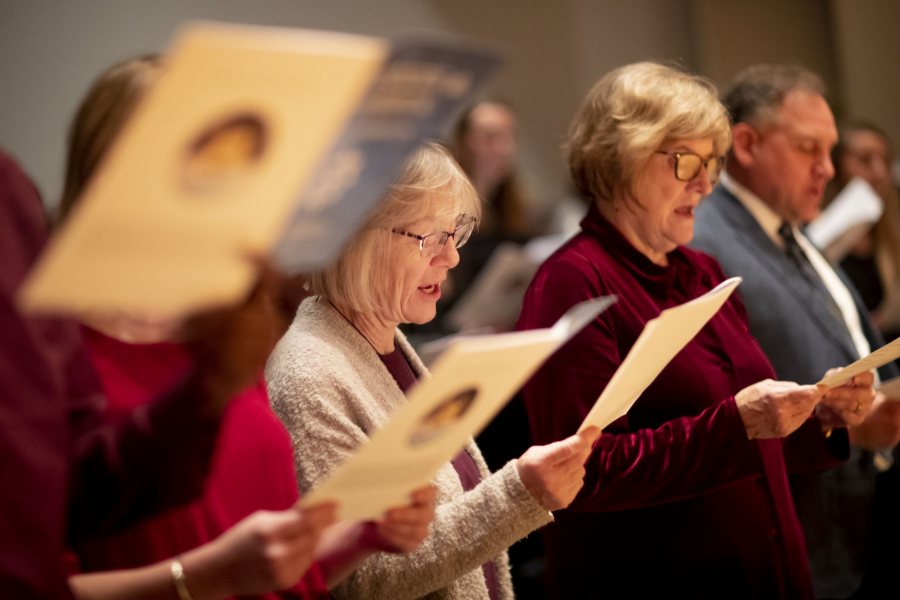 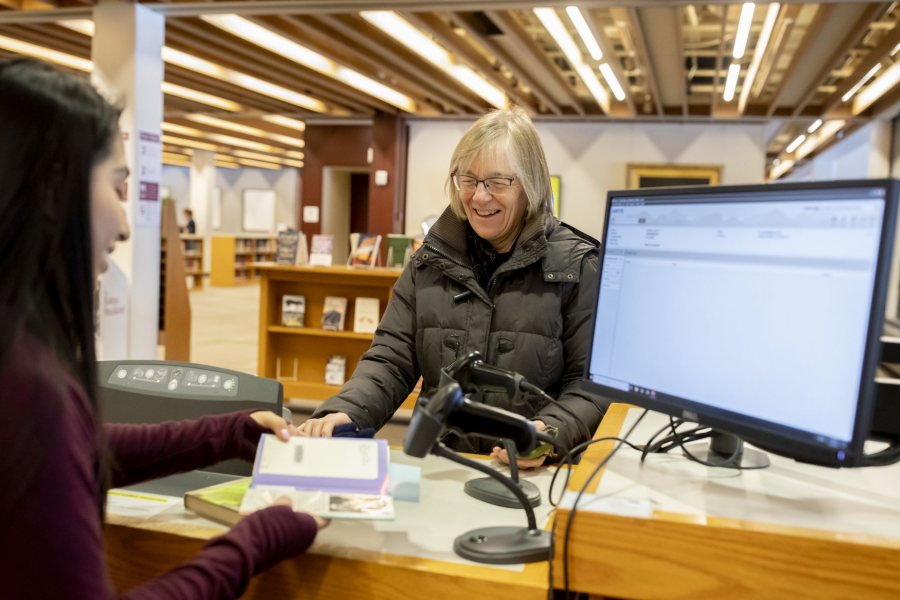 Above left, Costlow joins the annual “Candles and Carols” service in the Olin Arts Center Concert Hall. Above right, with the help of Joselyn Jaramillo ‘21, Costlow renews two books at Ladd Library, one for a scholarly essay and the other for a course she’ll teach next semester. (Phyllis Graber Jensen/Bates College)

As always, the semester concludes with grading papers and exams, an educator’s difficult challenge to “distill what you think a student has learned.” It’s also a time, Costlow adds, “where I feel like I kind of grade myself.” What went well? What didn’t go so well? What would she do differently?

She has taken to sometimes marking up a course syllabus, “creating a new version of it with notes in red ink: ‘Yeah, that reading didn’t work so well. It might be better to not use it or to pair it with this other one.’” She says it’s like a theater director giving notes to the actors, “except I’m giving myself notes.”

Next semester, Costlow will teach “Lives in Place,” as she did in the fall semester, so she has one more chance to tweak the syllabus for that course. She’s always loved that about teaching — the chance to say, “Well, that didn’t go that well this semester, but I’ll do it again, and see if it’ll go better next time.”

This past semester, however, was her last time teaching “The Question of the Animal,” and she realizes, “I’ll never get to make that course better.” 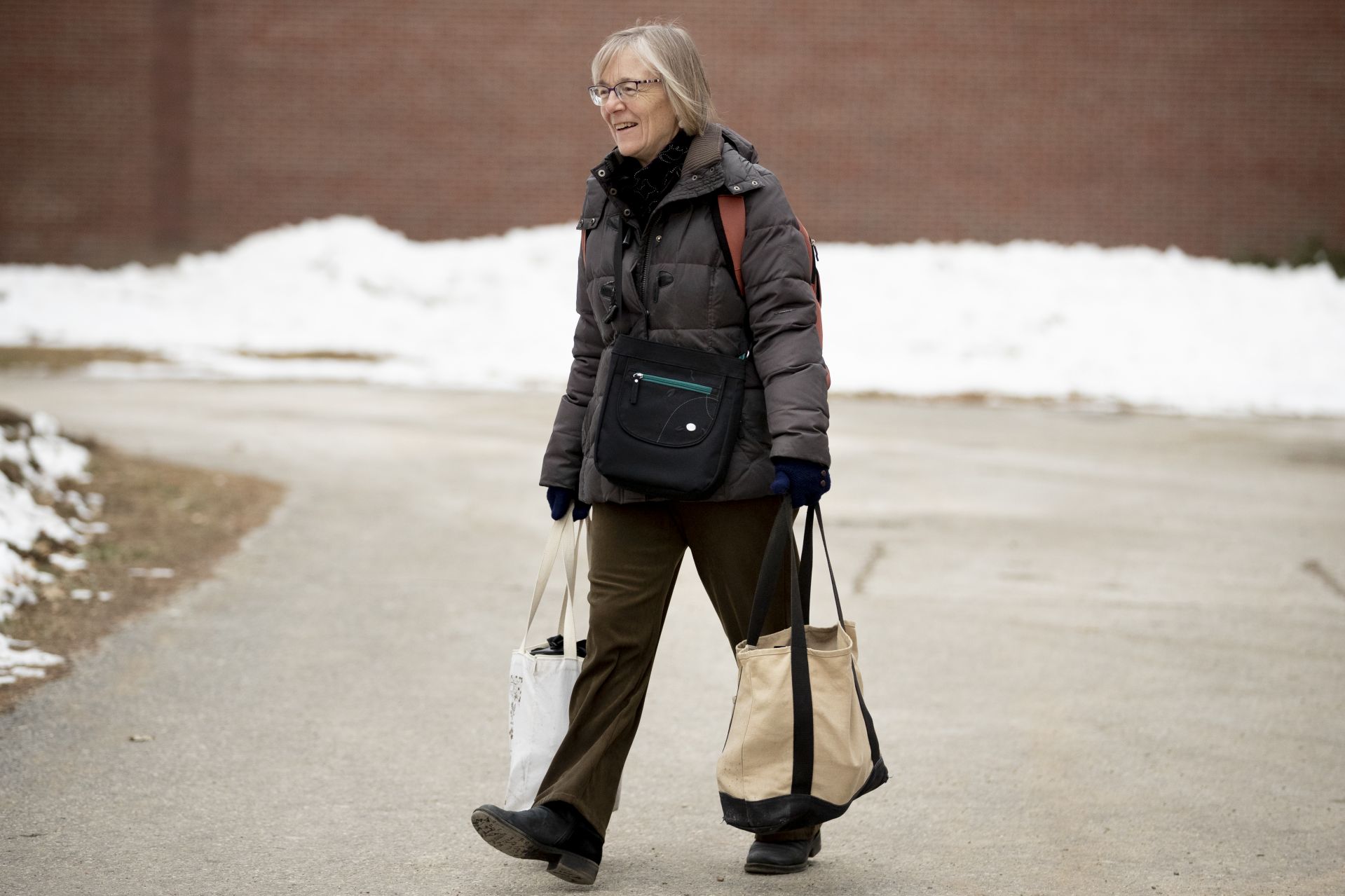