Lent grew up in Marblehead, Mass.; his father was a machinist and union organizer with United Shoe Machinery in Beverly, and his mother was a home-health nurse. He served in the U.S. Army as a Russian translator in Germany, then went on to earn a bachelor’s degree from the University of California at Santa Barbara and B.F.A. and M.F.A. degrees at Yale University.

He returned to UCSB to teach and spent the first decade of his career there, joining the Bates faculty as Dana Professor of Art in 1970. He taught painting, drawing, and printmaking at the college and served as department chair. He retired in 1999.

His arrival marked the birth of the visual arts program at Bates, said then-President Donald Harward in 2000. “When Professor Lent arrived, there was no sustained major in art, no museum, no systematic courses in painting, drawing, printmaking, ceramics, or photography.

“Few students even had studio experiences, for there weren’t any studios. Professor Lent was the primary architect of those opportunities. He brought together the students, the faculty, the spaces, and the programs.” As the college’s first cohort of art majors were set to graduate in 1973, Lent created the Senior Thesis Exhibition, now an annual and “vital testimony to Professor Lent’s contribution to Bates,” said Harward.

Partridge’s thesis project, drawing on his experience in another new Bates arts program, the Modern Dance Company led by Marcy Plavin, was “Dance Movement as Depicted in Certain Static, Two-Dimensional Media,” that media being graphite, charcoal, conte crayon, and chalk on paper.

“Don felt it was an important experience for each us to undergo,” says Partridge. “He made certain we understood the challenges a thesis would bring and helped us stay focused to achieve our goal.”

“He was a calm presence in charge,” Partridge says. “He was a true educator — dedicated to quietly helping each of us develop our own artistic expressions and expand our knowledge and experience.”

That support inspired Partridge to take a risk for his senior Mirror portrait, submitting a self-drawn portrait. And he was rewarded when the yearbook devoted a full page to the drawing.

Another of those pioneering art majors, Kitty Kiefer, recalls taking “Interaction of Color” with Lent, then in his first semester at Bates. “I have never been able to ‘un-see’ what I found in that class,” she recalls.

“My view of the world, my perspective, my quiet contemplation — my meditation on the spaces and people around me — were forever enriched.”

“One of my favorite things about Bates was buying books at the beginning of each semester,” and for Lent’s first class at Bates, the “books” consisted of a small book by Josef Albers, from which the course name was taken; a pot of rubber cement; and a package of colored papers — “hundreds of colors.”

The class met in Hathorn Hall, where Lent “talked about color, and transparencies, vibrations, echoes,” Kiefer recalls. “We went to the Quad, where the leaves were freshly falling from the trees, and made collage from those colors with the colors in our packets. I took every class he taught. I etched, I drew, I collaged. My thesis was about color.

“My view of the world, my perspective, my quiet contemplation — my meditation on the spaces and people around me — were forever enriched. I learned and was exposed to things I had never dreamed of.”

Charles Grosvenor ’74, whose filmmaking credits in Hollywood include producing the beloved Land Before Time animated franchise, recalled Lent’s guidance in a 2004 Bates Magazine story. “I cannot stress enough the impact Professor Lent had on my Bates years and subsequent career. For me he was the ideal professor. I did not want a drinking buddy or ‘pal’ as my mentor. I wanted someone who could teach, elevate, and advise. And all of these things Professor Lent did for me.”

“Mr. Lent didn’t say a lot,” says Kiefer. “But what he did say, at least to me, popped and opened me.  Then I would work with the skill being taught and learned, watch what others did, and go back to the blank paper or canvas in front of me. “

Grosvenor’s classmate Norton Virgien also parlayed his Bates art major into a career as a director and producer of animated films, including two Rugrats feature movies. Like Partridge, he found in Lent a “professor who was really interested in each of us and in helping us find what we might be good at.”

Lent and other faculty members, Virgien continued, instilled a “sense of possibilities….Bates was a place where you could try most anything you wanted to try, and there were professors who would offer incredible support and mentoring. When I got out into the world, I sort of dove into the bigger ponds with enough self-confidence to at least try a lot of things.”

In 1971 Lent gave these first Bates art students a formative experience by letting them take the lead in creating a mural on a blank brick wall on Lisbon Street. The mural’s narrative was straightforward: pedestrians moving through familiar Lewiston places. “I wanted the mural to connect to people in town,” Lent said. Figures of pedestrians moved between silhouettes of downtown features, including the onion domes of the Kora Temple and the spires of the Basilica of Saints Peter and Paul.

Bates had just approved an art major, and Short Term was just coming into its own, making it a heady time for the pioneering art students, recalled Jonathan Lowenberg ’74, who came to Bates to major in chemistry but switched to art partly because of the mural project. “It was a great dynamic,” he recalls. “We were enthusiastic about the major, and the project was something completely new for all of us.”

Knowing that Virgien was interested in filmmaking, Lent invited him to document the project with his Super 8 movie camera. For Virgien, it was “the first time that I had ever put together a movie with that kind of subject that people responded to.

“The thought processes that went into telling that story 30 years ago are still the ones I use today. When I am directing, looking at a group of artists assembled to make a movie, figuring out which ones would be good at which assignments and which artists could bring that certain Rugrat to life, that’s exactly what Don Lent was doing back then in finding film in me.”

(A few years later, the mural was removed during building renovations, “Maybe,” Lent reflected some time later, “the mural was more like an installation, designed for a specific place and time. After a while, it just didn’t fit into the plan.”)

Now a senior lecturer emeritus in art and visual culture, painter Robert Feintuch was appointed to the Bates faculty in 1976, joining Lent; part-time ceramics instructor Nancy Margolis; and art historian David Smith. Feintuch remembered thinking as he was interviewing for the job that he had “no chance. Artist-teachers often hire people whose work relates to their own — an occupational hazard not limited to the arts — and my work at that time, at first glance, could be seen as being in opposition to Don’s.”

Yet Lent did hire Feintuch — a testament to how Lent went about building the studio program. “Don was unusually open, intellectually curious, and widely read.” Pragmatic, too, Feintuch adds. With unerring support from the late Carl Benton Straub, dean of the faculty from 1974 to 1991, “Don tended to hire studio people part-time — kind of sneaking them in — and then, with Carl’s help, slowly getting the college to make serious commitments to them.”

In the early 1970s, Lent painted Scenes from the Canterbury Tales, a 5-foot by 40-foot mural located for many years along the walkway into Memorial Commons in Chase Hall. The project typified Lent’s creative approach, drawing on connections and relationships in his work.

The idea for the mural goes back to Depression-era ideas about the utility of public art. One of Lent’s mentors at UCSB was Rico Lebrun, who had painted murals in New York City and elsewhere as part of the Work Projects Administration in the 1930s. Lebrun worked with a young artist named Gridley Barrows, who would later join the Auburn-based architectural firm Harriman Associates, which has long done design work at Bates.

In 1970, Bates enlisted Harriman, with Barrows as lead architect, to renovate various Chase spaces. In 2013, Lent recounted for Bates Magazine how Barrows, perhaps recalling his WPA experience, suggested that a mural would do just fine on the wall above a walkway leading into Memorial Commons. Lent was the artist he had in mind for the job. But for Lent, the space, which both sloped and curved, presented a challenge.

“It is hard to create something that ‘reads’ well both close up and from a distance,” he said. “Gridley promoted simplicity — not trying to make things too detailed.”

At Bates, Lent also created sets and costumes for theater productions including The Trojan Women, Love’s Labour’s Lost, Caucasian Chalk Circle, and A Midsummer Night’s Dream. He wrote for the progressive weekly Maine Times; illustrated Heat Lightning, a collection of poems by Alan Stephens published in 1967; and published numerous book reviews. In the early 1980s, he designed the commemorative medal presented to recipients of the college’s Benjamin Elijah Mays Award honoring outstanding alumni accomplishment and achievement.

Lent brought together students and faculty and built a studio art program. “We were free to develop an identity,” Lent said in 1989.

In much the same way the faculty of the Bates history department, in the years before Pettengill Hall opened, forged an identity in ramshackle Canham House, the nascent art program, put down roots at 85 Russell Street, a former farmhouse across the street from campus that today houses ILS offices.

There, Lent brought together students and faculty and built a studio art program. “We were free to develop an identity,” Lent said in 1989, three years after Olin Arts Center, the department’s current home, opened. “We were left alone to grow.” But not without support, he said, praising then–President Thomas Hedley Reynolds for empowering his young faculty to effect positive change for the college, “to bring about change in [our] own way.”

As an artist, Lent created paintings, etchings, and drawings on a broad range of subjects from still life to farm animals to architectural forms. Notably, his series of paintings of bridges became a recurring theme, inspired by the geometric patterns he observed during commutes and travels to and from Bates over various river bridges.

In retirement, he lived in Dover, N.H., maintained a local studio, and exhibited widely in local galleries. He served two terms in the New Hampshire House of Representatives.

Meet the student artists, and view their work, featured in the 2017 Senior Thesis Exhibition 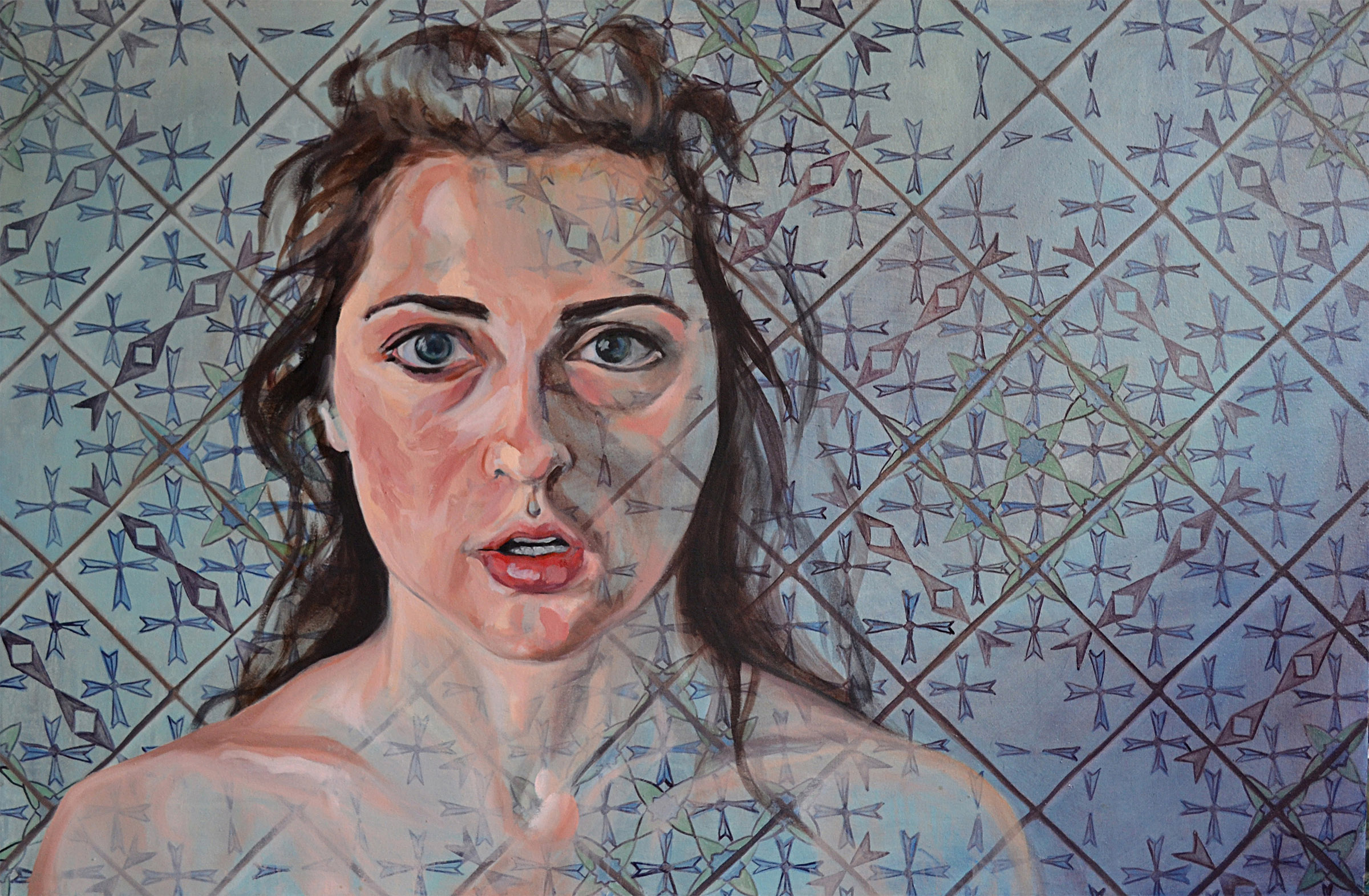