In construction as in all other spheres, there are those forces and processes one can see, and those that are hidden.

Whether one can understand what one can see, of course, is a whole other question. And that’s the question that gets Campus Construction Update out of bed in the morning, except on weekends, when we’re recovering from all that effort of trying to understand things.

Oftentimes the hidden happenings, if you only knew about them, would be more interesting than the visible ones. (Though it’s also true that the mere fact of being out of sight is inherently interesting.)

In the case of the Bonney Science Center project at Bates, though, we find it all intriguing. 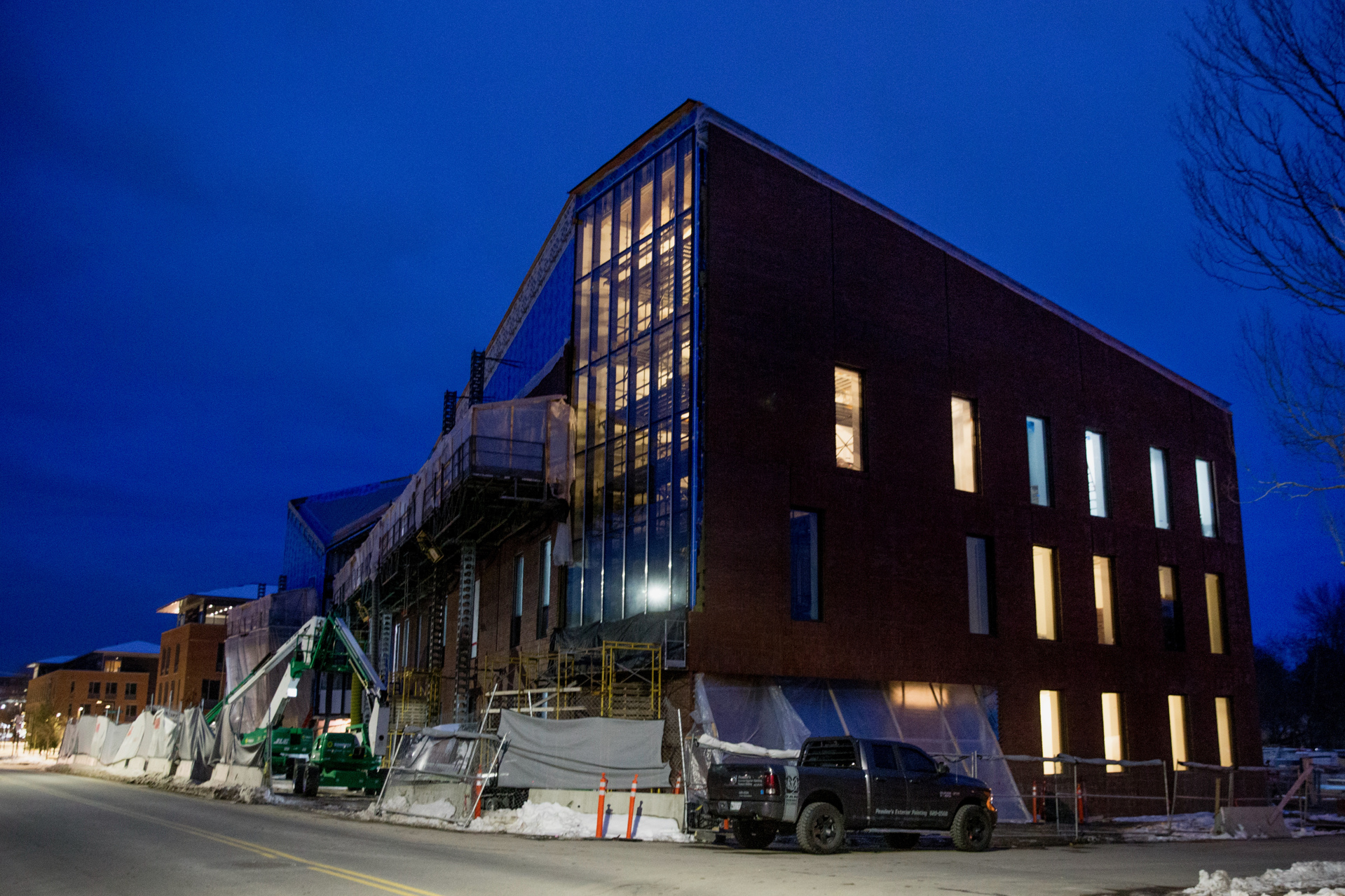 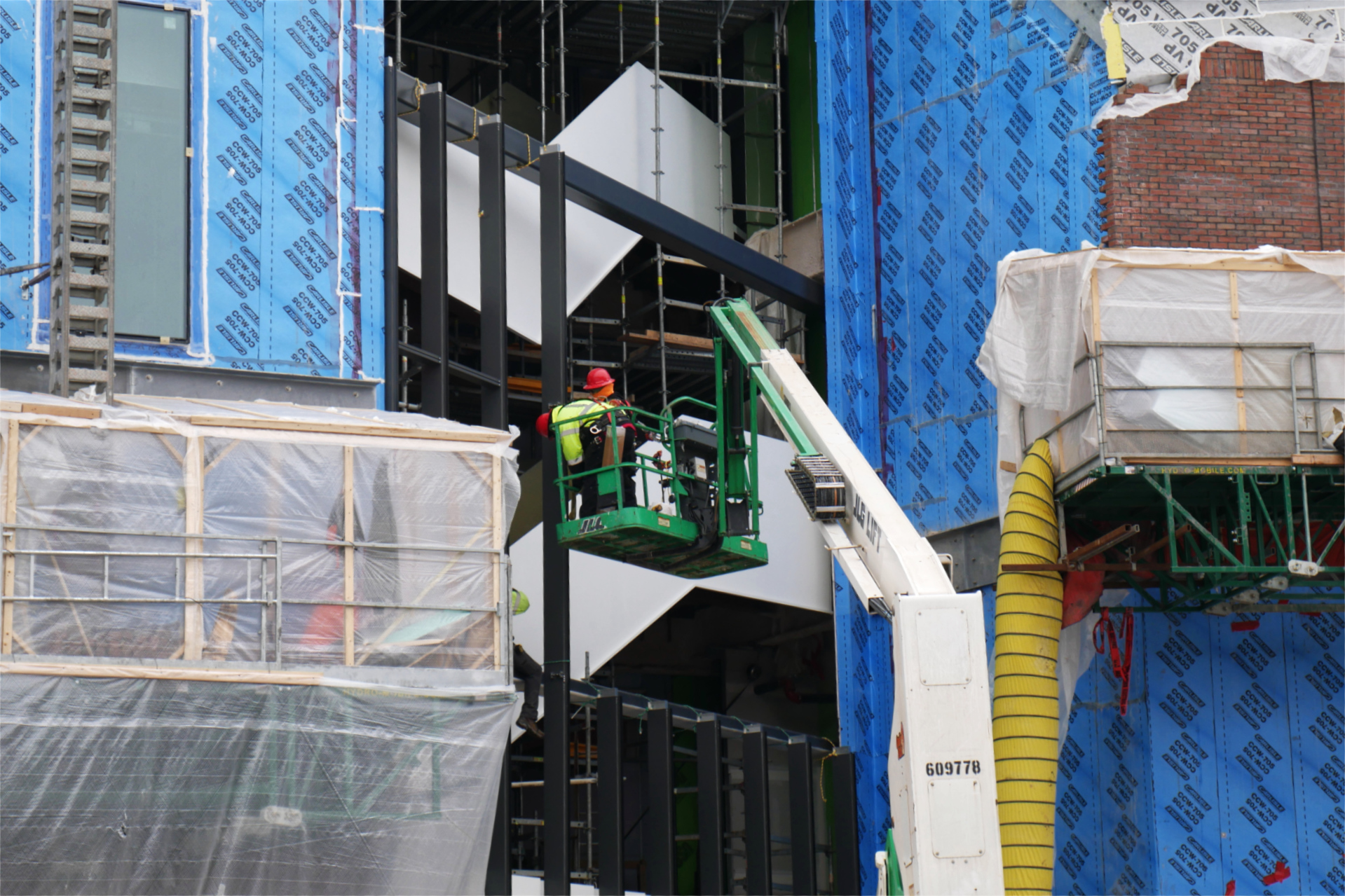 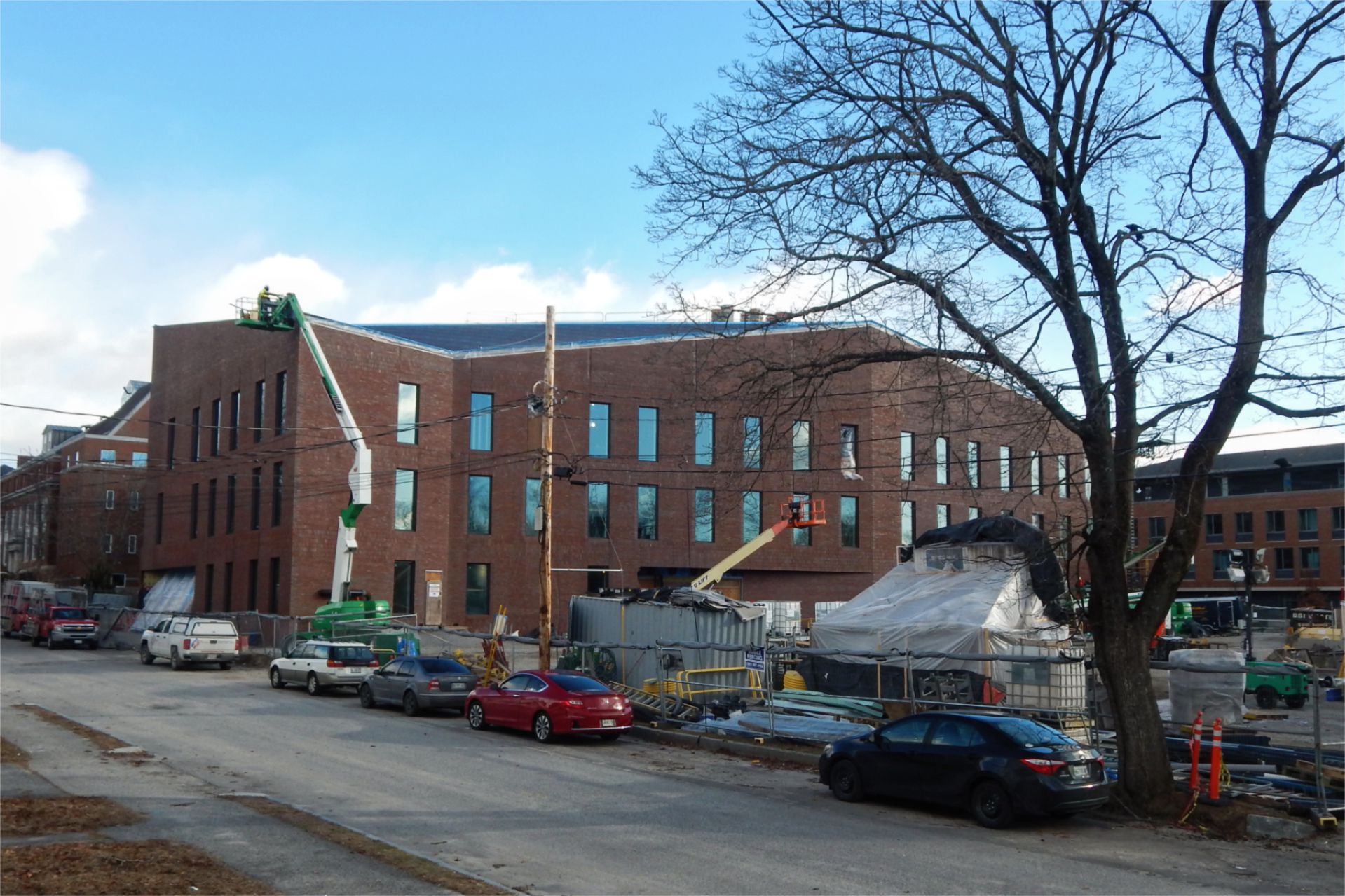 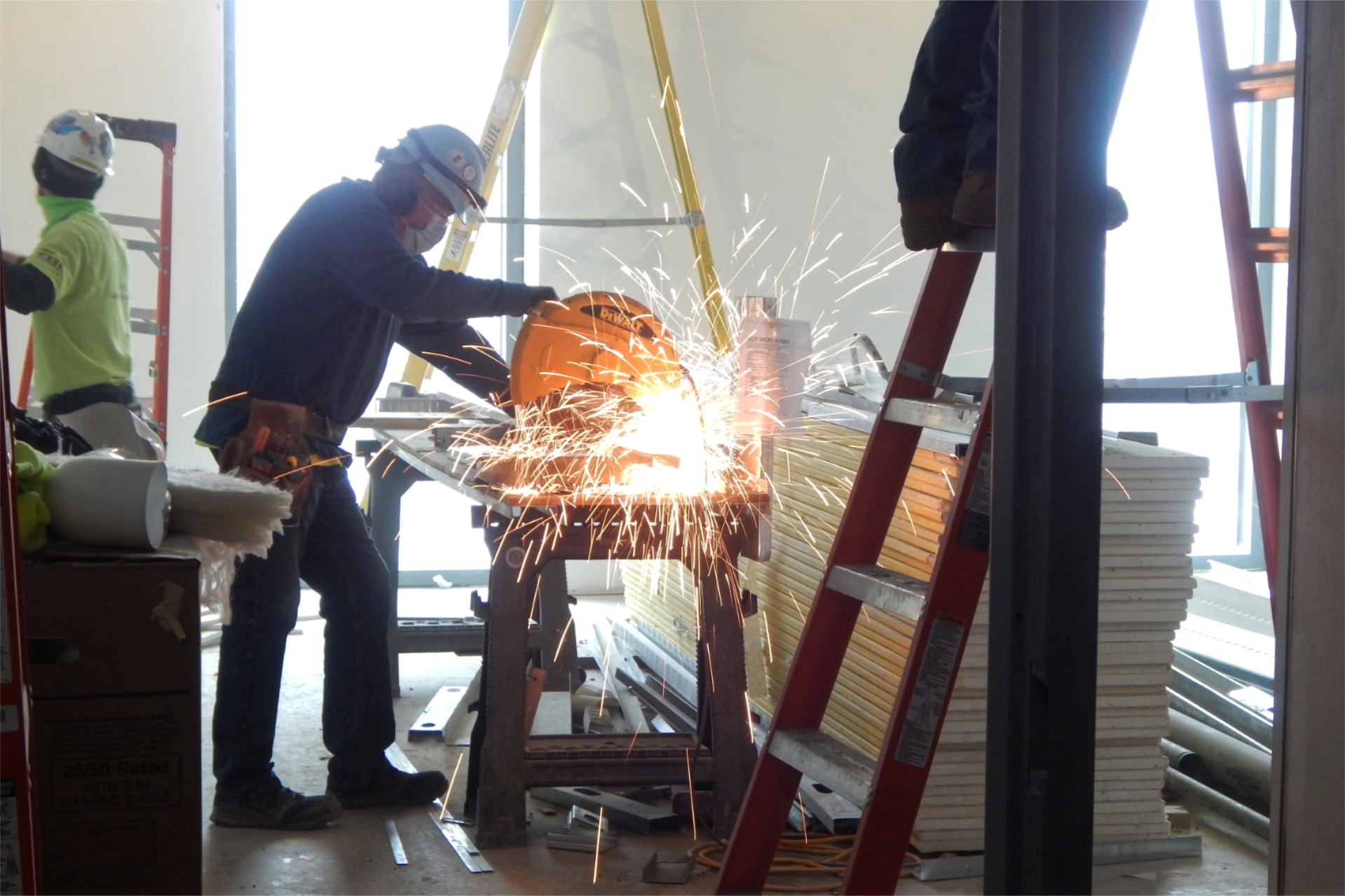 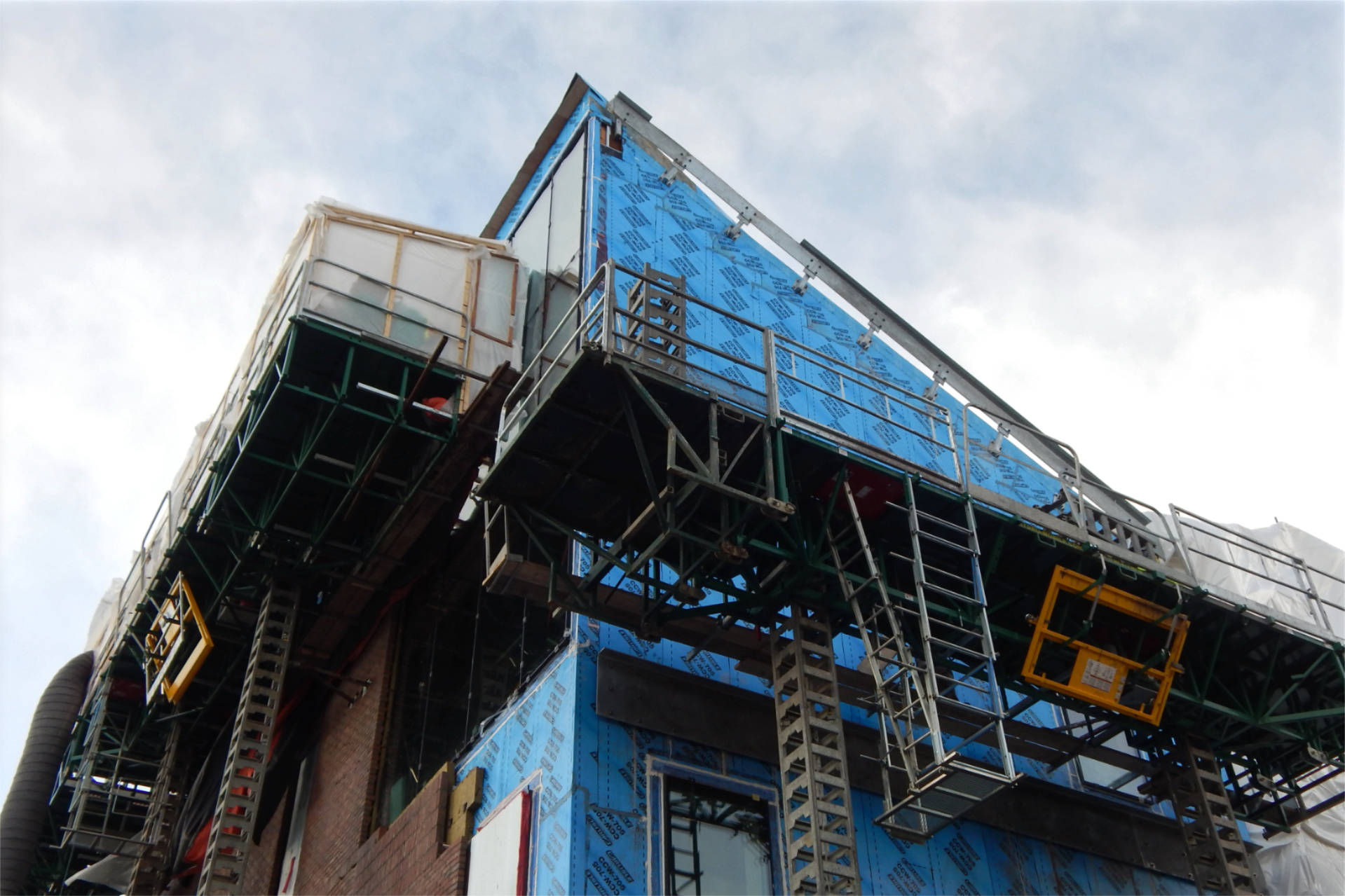 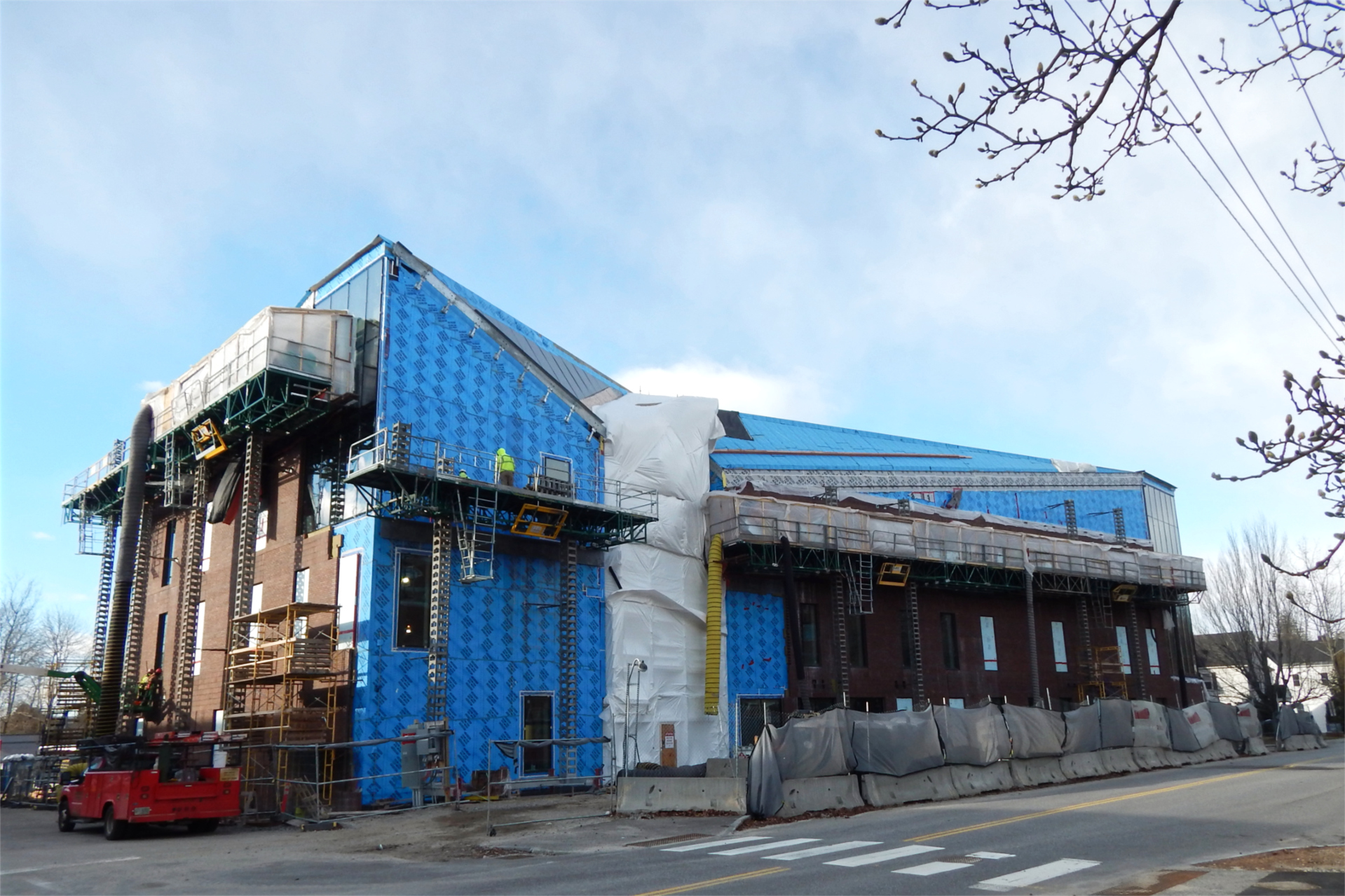 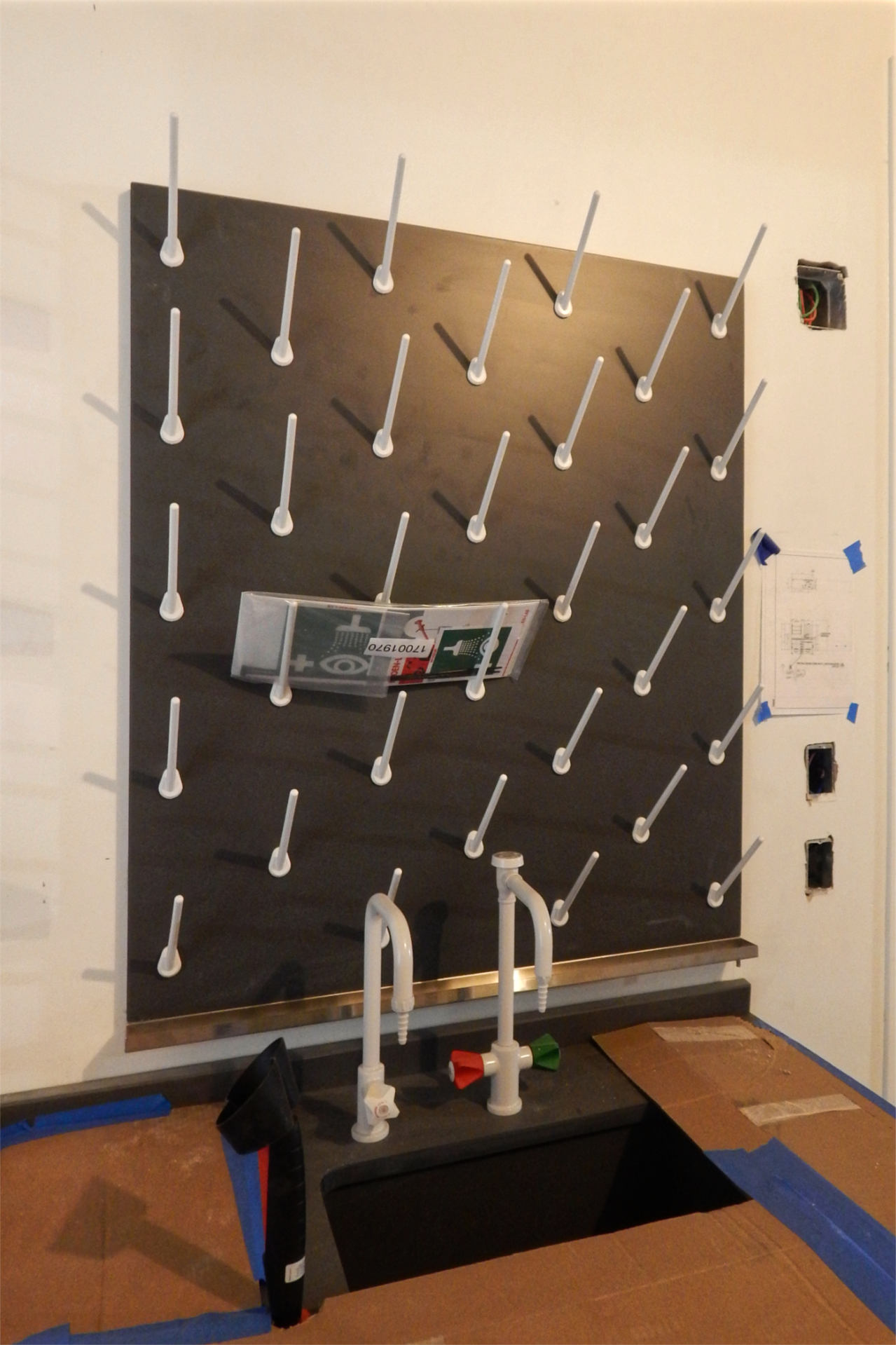 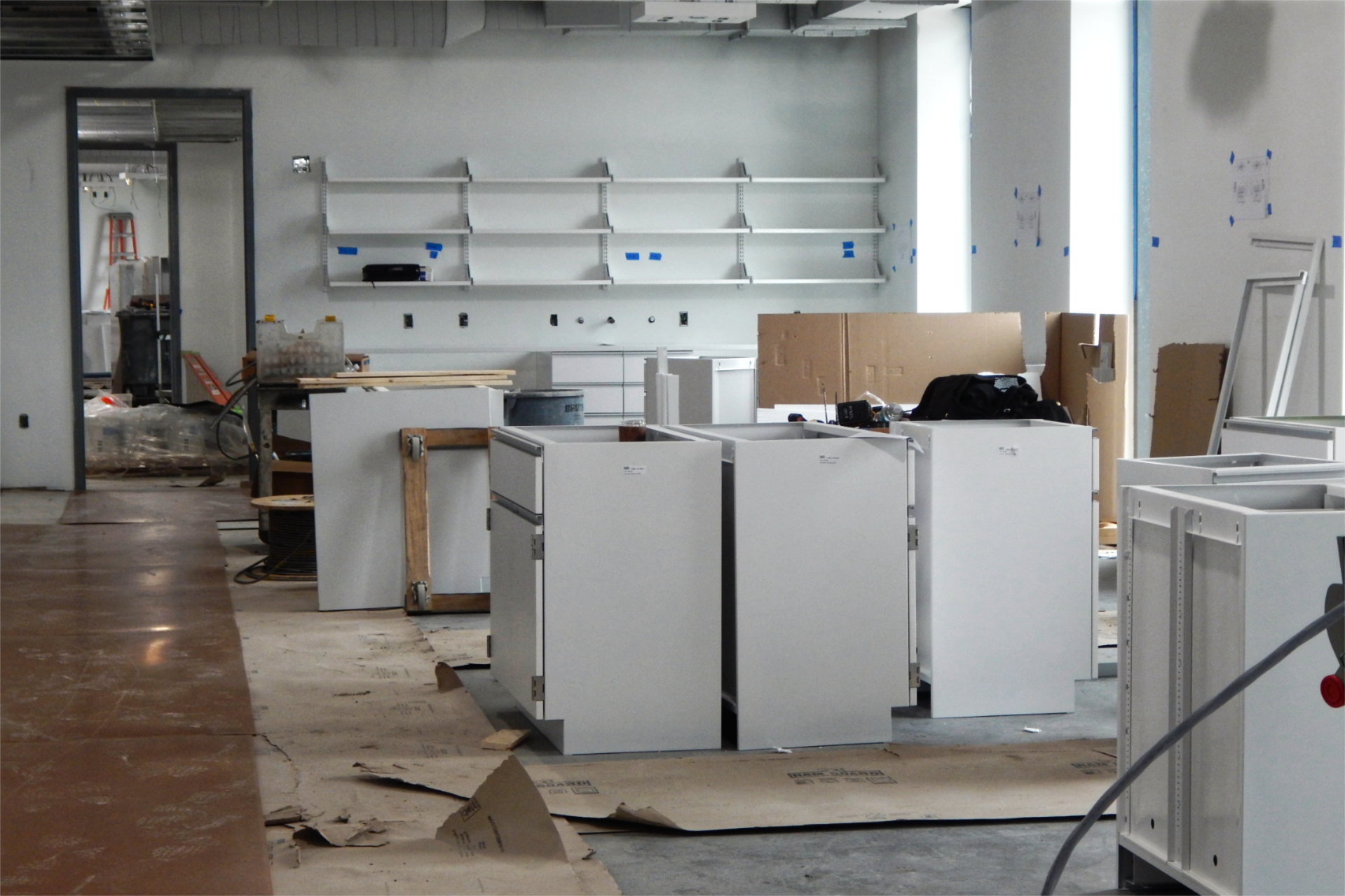 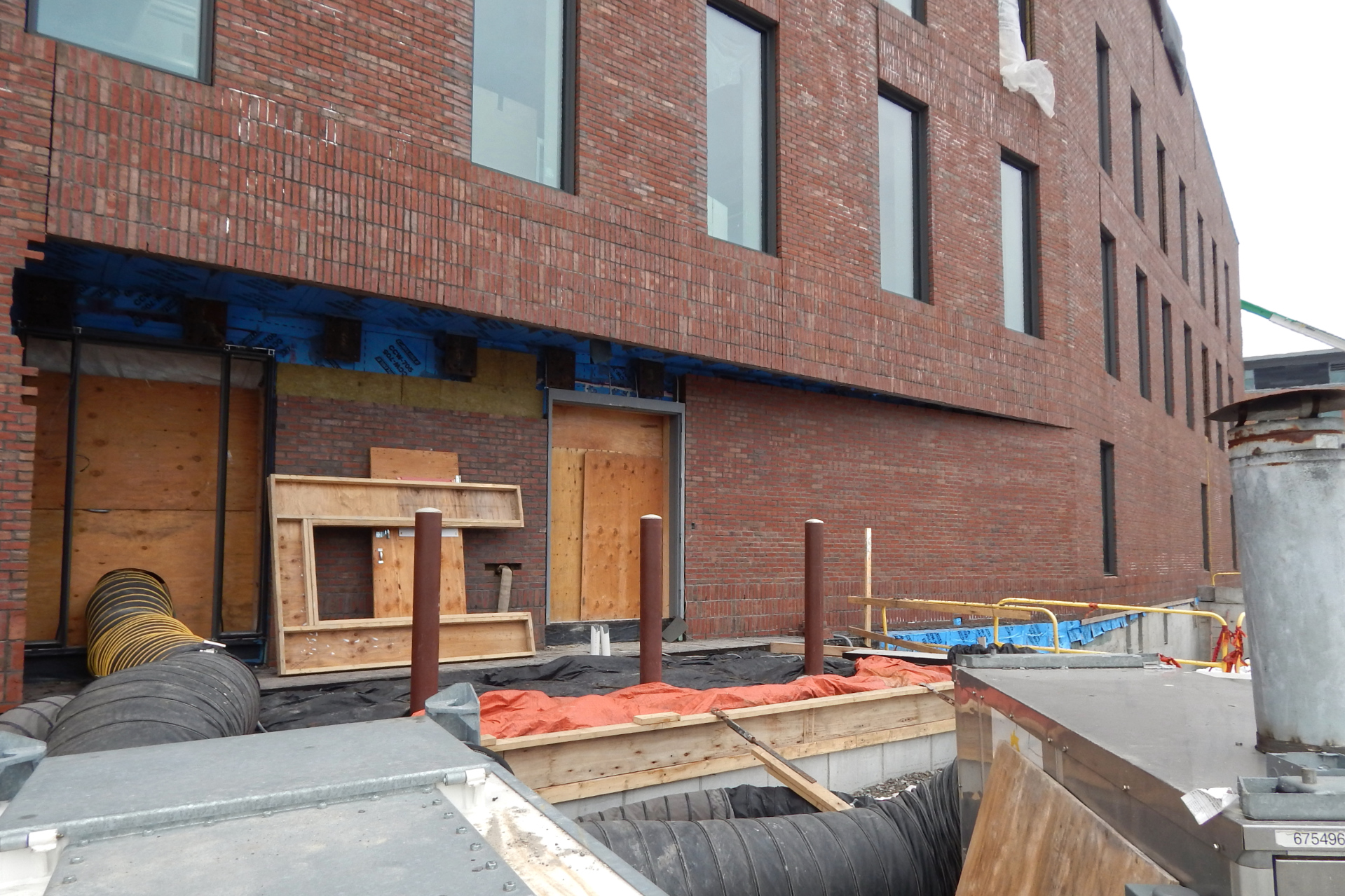 So what is revealed to you these days as you stroll past Bonney? Visible at two points — facing Campus Avenue near Carnegie Science and facing Bardwell Street near Campus Ave. — are expanses of glass that the pros call “curtain walls.” (The name, somewhat counterintuitive because transparency tends to defeat a key function of curtains, indicates that these aren’t load-bearing walls.)

Installed by the Augusta, Maine, firm O&P Glass, with help from Rhode Island’s Lockheed Window Corp., the curtain walls were in place by the second week of December. Glass on the north or Campus Avenue wall, a signature feature dubbed the Beacon, was placed second and is still receiving finishing touches.

“They’ve just got to put the final beauty caps on,” explains Chris Streifel, the Bates project manager responsible for the Bonney project. “There’s also some water testing that one of our consultants will do, just to confirm that everything is watertight and airtight.”

How, you may ask, do mere mortals wrangle sheets of glass weighing hundreds of pounds into place high above the cold hard ground? It’s a combination of technologies, explains Matt Rose, the Bonney project superintendent for Consigli Construction, which is managing project construction for Bates.

Wood’s Power-Grip of Laurel, Mont., manufactures the so-called vacuum lifter that O&P uses to maneuver each pane into place in the curtain wall’s gridlike metal frame. Active suction cups (as opposed to the press-on variety — it would take so much saliva to make those stick), mounted on an array of movable hydraulic arms, do the work of gripping and orienting each pane. The vacuum lifter and its operators ride up on a manlift.

Meanwhile, raising the glass to where the glaziers can muckle onto it is a telescoping-arm lift of a type familiar from the Bonney project. (You may have seen one moving concrete form panels around while the building walls were being created.) This particular model is built by Magni, in the Emilia-Romagna region of Italy, and, says Rose, “has a 100-foot boom with a 10,000-pound lift capacity.”

“To install the glass, you ideally have five workers,” says Rose, whose work includes coordinating the curtain wall operations. “You have two in a boom lift manipulating the glass, two inside on staging receiving the glass, and a licensed Magni lift operator.”

Finally, to secure the panes in place, they are sandwiched between inner and outer frames. A variety of seals makes them weathertight.

As we’ve explained previously, a third curtain wall is yet to come. Also on the north side, that glass that will mark the main entrance and showcase another signature Bonney feature, the three-story Monumental Stairs. Framing for that glass has been erected, its charcoal-gray finish contrasting smartly with new white paint on the stairway sides.

The glass could be in place by mid-February.

Also viewable from outside the construction fence is the bricklayers’ progress on the Campus Avenue side of the building. When we stopped by on Jan. 11, the Maine Masonry masons had covered about two-thirds of that wall. Excepting one section in the notch by the Monumental Stairs, completion by early February is likely.

Bricklaying on the other three walls, meanwhile, is all but done, and if you approach the building from a distance on Nichols Street, you might be forgiven for thinking Bonney is done (but not forgiven by us, because that would show that you haven’t been reading us regularly).

Some Bonney processes linger in limbo between visibility and invisibility. Those include placement of the copper roof cladding: Secured on high by their harnesses, ropes, and fall limiters, roofers for Lewiston’s Hahnel Bros. are proceeding clockwise around the building’s lid and are about halfway along the south slope, viewable if you know to look for them. (And now you do.)

Now let us turn to the realm of the hidden. (If we can find it.) The hot news, if you will, from the Bonney interior is that major components of the heating and air handling system have been switched on and are doing their job, at least in a limited way. Specifically, the smallest of the building’s three air handlers is in partial operation, and the other two are nearly complete enough to test.

These bus-sized contraptions live in the basement and are connected by shiny new ductwork to a nearby air intake chamber that draws from the great outdoors via a concrete airshaft, aka areaway. Heavily insulated, the intake chamber resembles the mother of all walk-in coolers, but the point of the insulation is to keep the ambient basement temperature constant whatever the outdoor temps may be.

And in conjunction with the air handlers, the three large boilers in the fourth-story penthouse have been fired up and are producing hot water that, in turn, warms the incoming air.

For some weeks now the Bonney building has been operating with its permanent electrical hookup, routed into the building via transformers and other infrastructure at nearby Chu and Chase halls. And finally, says Streifel, site contractor Gendron & Gendron has finished exterior storm-drainage work and the interior drains are all connected and functional.

Elsewhere inside the science center, with daytime and evening shifts going hammer and tongs, the finished product is coming into ever-better focus. On the first floor in particular, cabinetry and fixtures (shelving! coat hooks! drying racks!) and scientific equipment such as fume hoods were abundant during our visit. And while finish coats of paint are a ways off still — to forestall damage from other work, finish painting is one of the last chores in a building project — enough of the final colors have been applied to provide a clear sense of the ultimate appearance.

With the end of building construction slated for late spring, and the Bonney opening timed for the start of the 2021–2022 school year, all engaged in the project — averaging 80 to 100 people just on the job site — are running in overdrive.

“It’s a race now,” says Streifel. “There’s a lot left to do and a short amount of time to do it. It’s all hands on deck, all systems go, full bore.

Can we talk? Campus Construction Update welcomes queries and comments about current, past, future, and aspirational construction at Bates. Write to dhubley@bates.edu, putting “Campus Construction” or “If it weren’t for Venetian blinds, it would be curtain walls for all of us!” in the subject line.