Good morning everyone. Welcome. It is wonderful to see this chapel absolutely full on this particular Martin Luther King Day. To state the obvious, this year’s topic, “From Selma to Ferguson: 50 years of Nonviolent Dissent,” could not be more timely. 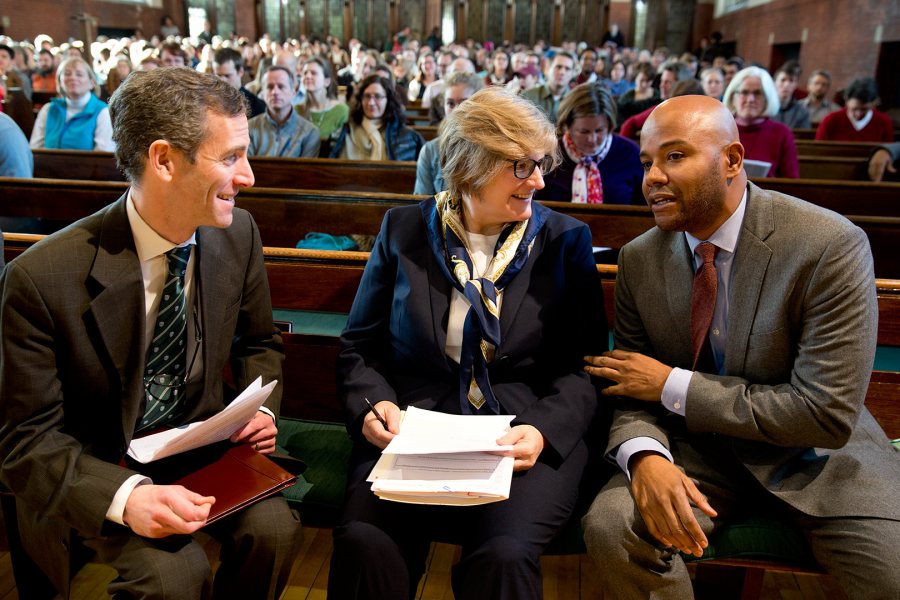 It is worth noting that this year’s theme was announced by our MLK Day Planning Committee in mid-September, long before a grand jury declined to indict police officer Darren Wilson in the fatal shooting of Michael Brown in Ferguson, Missouri; long before a Staten Island grand jury similarly failed to indict the police officer in the Eric Garner chokehold case; long before protests calling attention to these events erupted in cities and on campuses across the nation, including our own; and long before officers Ramos and Liu were shot in Brooklyn in apparent retaliation for the earlier deaths, an act made all the more tragic by the gunman’s reported history of untreated mental illness.

“We were prepared to challenge ourselves.”

Why is this question of timing important? Because it suggests that we on this campus were quick to see the connection between the events that have rocked this nation over the past six months and the battles 50 years ago to win passage of the Civil Rights Act and the Voting Rights Act. More important, it shows that we here on this campus were prepared to challenge ourselves to acknowledge and act on the ongoing stark gap — nearly five decades after the death of Martin Luther King — between our ideals as a society and our lived reality.

Our keynote speaker, Peniel Joseph, has written a book called Dark Days, Bright Nights: From Black Power to Barack Obama. He talks about the exhilaration that we felt when Barack Obama, our first black president, was elected. He talks in particular about the exhilaration felt by the black community. Many people hailed this election as the capstone of the civil rights movement. But Joseph argues that the election of Barack Obama “remains better judged as a starting point toward further struggles for racial justice and radical democracy than the capstone of the civil rights era.”1

So, too, we should see today’s observance as a moment for reflection and challenge in an ongoing struggle, rather than as an opportunity to celebrate the codified victories of the civil rights movement.

This is true for the nation, and it is true for us at Bates. We take pride in our college’s founding principles that have helped to give events like today’s MLK Day observance very specific and recognizable Bates qualities. But we, too, need to challenge ourselves in the present to live up to the ideals marked out for us by those who have gone before.

Like, for instance, Benjamin Mays, Bates Class of 1920, the great theorist of civil rights and mentor to Martin Luther King Jr., who delivered the final eulogy at King’s funeral, explaining the paradoxical link between the ideals of non-violent dissent and the violence it often begets. Mays said:

[Dr. King] gave people an ethical and moral way to engage in activities designed to perfect social change without bloodshed and violence; and when violence did erupt, it was that which is potential in any protest which aims to uproot deeply entrenched wrongs.2

Another person who has gone before, and is lesser known but he shouldn’t be, is John P. Davis, Bates Class of 1926, honors graduate, president of the Bates Debating Council, and editor of The Bates Student newspaper, who was the first African American to be sent oversees under the auspices of the American University Union as part of a debating team that defeated Cambridge. Davis was a graduate of Harvard Law School and a major figure in the early civil rights movement. Prominent in the founding of the National Negro Congress in 1935, in 1943 John P. Davis, our graduate, brought the first lawsuit challenging segregation in the Washington, D.C., public schools.3

Another Bates person who has gone before is James Nabrit, Bates Class of 1952, who played a direct role in the events that anchor today’s discussions. In 1965, two weeks after Bloody Sunday in Selma, a federal court ordered protection for the marchers’ next effort but insisted on having a detailed plan. A civil rights lawyer educated at Yale Law School, Mr. Nabrit was a key member of the team that basically pulled an all-nighter to come up with a plan that would outline the now-historic march route from Selma to Montgomery. Over the course of the subsequent 30 years Nabrit served as one of the lead attorneys at the NAACP Legal Defense Fund, and went on to argue 12 cases before the Supreme Court, winning nine.4 This was our graduate.

One of Nabrit’s cases was Shuttlesworth v. Birmingham. In Birmingham at the time, police were using city ordinances to prevent legal nonviolent dissent. One day in 1962, Fred Shuttlesworth, an African American preacher, activist, and co-founder of the Southern Christian Leadership Conference, was arrested because he and others refused to move from where they stood in front of a department store. The arrest was based on a city ordinance that made it a crime for “any person to stand or loiter upon any street or sidewalk of the city after having been requested by any police officer to move on.”5Shuttlesworth was convicted and sentenced to 180 days of hard labor.

On appeal, the case made it to the Supreme Court, and Mr. Nabrit argued it and won. The high court blasted the city, saying that its attempt to stop citizens from peaceful, nonviolent action bore “the hallmark of a police state.” 6

We hear echoes of this sentiment in contemporary reactions to Ferguson and Garner, providing further evidence, if such were needed, for our speaker’s argument that the struggle for racial justice is far from over.

It is now my pleasure to welcome professor Alero Akporiaye, who will in turn introduce our distinguished keynote speaker, Peniel Joseph. Thank you.