Rachel Degrosseilliers remembers the chain-link fence that encircled the Bates campus when she was growing up in Lewiston in the 1940s and 1950s. “Bates College was like an island,” says the Franco-American millworker’s daughter. “We regarded Bates as the elites, the intellectuals. The fence seemed to say, ‘Keep out.'”

Degrosseilliers, director of Museum L-A, is telling this story in her office in the vast Bates Mill complex along the Androscoggin River. Next to her sits Jessica Dumas ’06, curator of the young museum dedicated to preserving Lewiston-Auburn’s industrial and cultural history. On the opposite wall is a design concept for Weaving a World: Lewiston’s Millworkers, 1920–1980, a traveling exhibit researched by a team of students working with David Scobey, director of the College’s Harward Center for Community Partnerships. 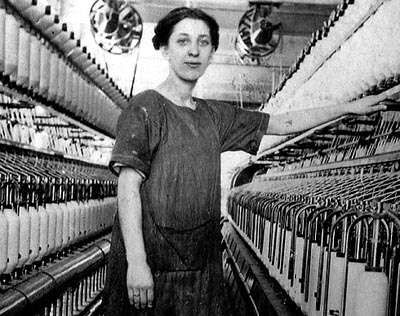 Downstairs, in a loom room-turned-gallery, is Portraits and Voices: Workers of the Seven Mills, a multimedia exhibit co-designed by Bill Low, assistant curator of the Bates College Museum of Art.

“We wouldn’t be able to do this without Bates College,” Degrosseilliers says. “But this is not just Bates, the savior, doling out help to the community — it’s a real give-and-take. We give their students great educational experiences. They help us build our community’s history.”

The infamous fence between Bates and Lewiston-Auburn has been literally and figuratively gone for more than a decade, dismantled mostly by Don Harward, whose presidency was marked by greater Bates engagement with the local community, especially through service-learning. Hence the existence of the Harward Center for Community Partnerships, dedicated in 2002, the year of his retirement.

As the center matures, the scope of its programming has expanded. Last year the center funded 14 initiatives, for a total of $144,984, to support its mission to create durable, academics-based community relationships. (The center also oversees the Bates–Morse Mountain Conservation Area, not to mention routine campus event management and traditional volunteerism.)

But more than a money source, the center has an activist soul — its goal is to create “transformative experiences for students and faculty based on collaboration and democratic citizenship, not only service,” says Scobey, a former Rhodes Scholar who directed the University of Michigan’s Arts of Citizenship program before coming to Bates. David Scobey, director of the Harward Center for Community Parnterships, calls town-gown partnerships “collaboratories,” a word that emphasizes the intensity of the partnerships. Photograph by Phyllis Graber Jensen.

David Scobey, director of the Harward Center for Community Parnterships, calls town-gown partnerships “collaboratories,” a word that emphasizes the intensity of the partnerships. Photograph by Phyllis Graber Jensen.

Scobey calls these town-gown collaborations “collaboratories” because they represent “rigorous, innovative educational work. The partnership with Museum L-A is one of these.”

In turn, the sustainable nature of the collaboratories captures the faculty’s serious attention. “Responsive and willing” is how curator Dumas describes faculty interest in Museum L-A projects, while Scobey notes that faculty engages about half of Bates’ 1,700 students in “significant community-based learning,” from internships to research.

The integration of service and citizenship into academics distinguishes the Harward Center from most of its national peers, whose work primarily involves coordinating extracurricular volunteerism. Bates’ distinctiveness was underscored by the center’s recent $100,000 grant from the W.K. Kellogg Foundation. The grant specifically invites Bates to join a select and diverse group of Kellogg grantees into the national discussion of civic engagement. Of that select group, “Bates is the only entity focusing on civic engagement in undergraduate education,” says Scobey, who is also the Harward Professor of Community Partnerships at Bates.

The foundation of the Harward Center / Museum L-A partnership was laid in 2004, shortly after Degrosseilliers was hired to create a museum with artifacts rescued from the vacant mills that were once the cities’ economic and cultural heart. “It was nice to show machinery,” Degrosseilliers says, “but a big part of the history was missing: the millworkers’ stories.” Contacted by the Harward Center, Degrosseilliers leapt at the opportunity to have Bates students, guided by professors eager to teach them about ethnographic fieldwork, interview retired textile workers.

Michael Wilson ’07 did some of the 96 interviews, including one with Cecile Burgoyne, who claims to be the first woman to wear bloomers to work. “She’s sassy and fresh, and she’d laugh and slap me in the side,” he smiles. Their friendship — Burgoyne came to campus to see Wilson perform in Little Shop of Horrors — prompted the math major to delve further into community work. “I caught the bug,” Wilson says. In a loom-room-turned-gallery in the Bates Mill complex, Museum L-A last year presented its first exhibit, Portraits and Voices: Workers of the Seven Mills.

He added a second major, in American cultural studies, and earned honors for his thesis, which Scobey advised, on Museum L-A’s effect on civic engagement. Wilson is now an AmeriCorps VISTA member developing service-learning partnerships at the University of Southern Maine.

“I left Bates charged with a passion for democratic community,” Wilson says. Scobey, he adds, “gave me a language for a desire I hadn’t been able to articulate.”

Museum L-A’s mission resonates personally with Dumas. Like Degrosseilliers, she’s a Mainer, raised in Saco, whose heritage is French Canadian. As a student, she and Wilson did research for the museum’s current traveling exhibit, Weaving a World, and learned how immigrants became integrated into the Lewiston community. “It opened my eyes to my own history,” says Dumas. A history major eager to enter the museum field, she joined the museum’s four-person staff last year.

“I left Bates charged with a passion for democratic community,” Wilson says.

Already a Museum L-A volunteer, Bill Low won Harward Center funding — from a program that underwrites “publicly engaged” projects by faculty and staff — to support his contributions to Portraits and Voices. The museum’s first major exhibit, it featured portraits of retired millworkers taken by cultural anthropologist and photographer Mark Silber and oral histories by Andrea L’Hommedieu, then of the Edmund S. Muskie Archives.

Low helped to bring it all together, from organizing didactic materials to producing the exhibition catalog. “It’s a natural fit for people from Bates to use our skills this way,” he says. “Public service is Bates tradition. And this is our community.”

One of 10 "Top Performer"s in the country, Bates earned a Gold rating for excellence in sustainability performance from an international benchmarking organization.

Veterans Day: poetry, taps, and a poignant ritual at Veterans…

A poignant observance at Veterans Plaza offered a simple ritual that "people can interact with throughout Veterans Day," says the Rev. Brittany Longsdorf.

With 85 percent of eligible students heading to the polls in 2020, Bates was recognized for having one of the highest voting rates in...