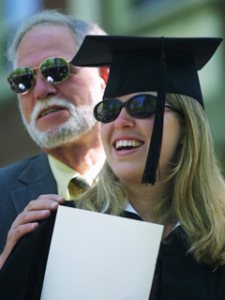 Nobel laureate Steven Weinberg asked Bates College’s graduating class Monday to join him as “allies in a movement that is about 300 years old — the movement known as the Enlightenment.”

In his address, Weinberg said the Enlightenment has made the world “a freer and gentler place” through its emphasis on the power of reason and its skepticism about many traditional social, political and religious ideas. Weinberg said that today some historians, philosophers and cultural critics talk as if the Enlightenment were over, as if we were now in a post-Enlightenment age. “Don’t believe it,” he said. “Even here in America we have religious zealots who try to corrupt the teaching of biological and astronomic science in public schools, who try to ban research on therapeutic cloning, who try to prevent building astronomical observatories on the tops of mountains that some people think are sacred, and who, in extreme cases, bomb abortion clinics.”

Weinberg said that, in reaction to racism, sexism and imperialism, there is a widespread commitment at American and European universities to “a kind of multiculturalism – which doesn’t look kindly on a movement like the Enlightenment, which originated with the proverbial dead white European males,” he said. “Even so, the dedication to principles of equality that is inherent in multiculturalism is itself one of the fruits of the Enlightenment and not the least valuable.”

Weinberg said that he welcomed the skepticism of the 416 graduates, including skepticism about his own remarks.

Weinberg was winner of the 1979 Nobel Prize in physics and is today a theoretical physicist at the University of Texas. Weinberg has researched a broad range of topics in quantum field theory, elementary particle physics and cosmology.

The graduating class honored the memories of three students who had died before graduation: Jessie Withrow and Merrick Ryan in 2000, and Morgan McDuffee in March 2002.

McDuffee, who was killed while trying to break up a fight, had completed his senior thesis, and his degree in economics was awarded posthumously to his parents, Regis McDuffee of Newburyport, Mass., and Lisa Freeman of Peterborough, N.H.

Trustee Chair Burton M. Harris observed that the commencement was the last one for Bates President Donald W. Harward, who retires in June after 13 years of service.

“His presidency will long be remembered as one of the most rigorous, thoughtful and progressive periods in the proud history of Bates,” Harris said.

The outdoor ceremony on the historic quad in front of Coram Library drew about 2,500 people.

"Bingo" to be Staged at Bates