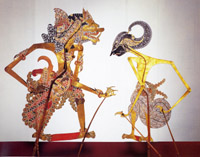 Sumarsam, a Wesleyan University professor who had his first experience with Indonesian performing arts as a boy in his East Javanese village, devotes two evenings to Indonesian shadow puppetry this week.

At 7 p.m. Thursday, Jan. 23, Sumarsam (who, like many Indonesians, uses only one name) gives a lecture titled “Performing Hindu Stories in Indonesia: Introduction to Shadow Puppet Theater (Wayang Kulit).” At 8 p.m. Friday, Jan. 24, he performs a puppet play accompanied by Indonesian and American musicians, including Bates’ own gamelan ensemble. Both events take place in the Olin Arts Center Concert Hall, 75 Russell St., and are open to the public at no cost.

As the name indicates, the essence of Indonesian shadow puppetry is the action of puppets silhouetted against a backlit cloth screen. Performance is labor-intensive for the “dhalang,” or puppet master. This person manipulates the puppets, speaks for all the characters, sings, directs the accompanying musicians and makes sound effects (usually with his feet).

Born in Dander, East Java, in 1944, Sumarsam took part in an all-night performance of Indonesia’s traditional, percussion-based gamelan music when he was 7, sitting in for a sleepy drummer. He joined that ensemble at age 8 and stayed with music, studying gamelan at a performing-arts high school and later at the college level in Indonesia.

He went to Wesleyan in the early 1970s as a visiting artist, earned his master’s degree there in 1976, and in 1992 earned his doctorate in ethnomusicology and Southeast Asian studies at Cornell. Today he is an adjunct professor of music and director of graduate studies in Indonesian music and theater at Wesleyan.

Wayang kulit integrates the percussion-based music called “gamelan.” Performing with Sumarsam on Jan. 24 will be several highly regarded, U.S.-based musicians, including singer Jody Diamond of the American Gamelan Institute and drummer Harjito, also of Wesleyan, which has one of the premiere gamelan programs in the United States. The Bates ensemble Gamelan Mawar Mekar will also perform.

The puppets that Sumarsam will use in the performance are part of a collection of more than 300 on permanent loan to Bates College. David Eisler, an attorney in Dover, N.H., has loaned the collection to Bates to honor the memory of his father, Dr. Milton Eisler. Eisler made the loan, he says, to ensure that the collection remains intact. It includes characters, animals and scenic elements.

Wayang kulit, Eisler says, is a “theater tradition as sophisticated as Shakespeare and 1,000 years old.”

Sumarsam’s performance on Jan. 24, depicting a climactic battle scene from a much longer play, is based on a Hindu story. “In Java, which is primarily Muslim, where most of the musicians are at least nominally Muslim, most of the traditional wayang is based on Hindu epic,” says Rose Pruiksma, director of the Bates gamelan program.

“Indonesian Islam is not generally fundamentalist Islam,” she says. It assimilated beliefs and practices from Indonesian Hinduism and pantheism. “There’s actually a very rich mixture of traditions and a very high degree of religious tolerance in certain ways,” she explains.

These presentations are part of the Bates program “Islam in the World, the World and Islam,” made possible by the Christian A. Johnson Endeavor Foundation.