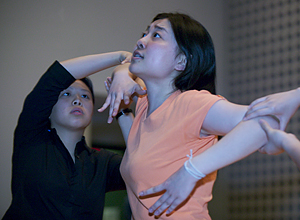 The Memory of Salt, a play written by Lisa Maurizio, associate professor of classical and medieval studies at Bates College, will be performed at 8 p.m. Friday and Saturday, May 21 and 22, in the college’s Perry Atrium, Pettengill Hall.

The story of a mother’s quest to bury her child, The Memory of Salt takes place in the aftermath of the Greek conquest of Troy (although the play’s simultaneous debut with the Brad Pitt film is coincidental).

“It looks at the question of desire and the degree to which it makes us human and binds us to one another,” says Maurizio, “or entraps us and compels us to do things that are perhaps not very good.”

The play features choreography by the incoming head of the Bates dance program and music by faculty and a resident scholar involved with the Bates gamelan, a type of Indonesian musical ensemble. In theatrical terms, Salt borrows from two traditions: ancient Greek and Japanese “noh” drama.

But it represents the culmination of a collaboration among Maurizio, director John Ambrosino — a 2001 Bates graduate and founder of the Boston theater company the Animus Ensemble — and the late Ellen Seeling, a theatrical designer and associate professor of theater at Bates.

The three shared a “vision of world theater,” said Maurizio, and earlier collaborated on Tereus in Fragments, which Maurizio wrote, Seeling designed and Ambrosino directed last year, both at Bates and in Boston with his own company to good reviews.

In particular, Maurizio, Seeling and Ambrosino were intrigued by the stylized aspects of ancient Greek theater and noh, traditions that emerged from very different cultures and historical periods but had in common a variety of formal devices or practices.

“Both began in outdoor theaters,” Maurizio says. “They began in religious festivals, they used all-male actors wearing masks, they involved music and dance, they have choruses, and they have only one to two protagonists.”

Maurizio credits the creative vision of her colleagues for the inspiration to write the piece. In particular, she says, “this play could not have happened without Ellen and I collaborating together three or four years ago” on other projects.

In the spirit of that collaboration, faculty from other areas contribute to the Salt production. Carol Dilley, visiting assistant professor of dance, provides choreography, while the music is created by visiting Fulbright scholar Joko Susilo, working with the Bates College Gamelan Mawar Mekar, led by Gina Fatone and Rose Pruiksma of the music faculty.

The Costas and Mary Maliotis Charitable Foundation provided significant funding for the project. Ambrosino’s participation is supported by the Mellon Learning Associates Program in the Humanities at Bates.