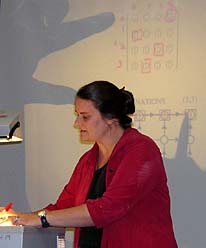 Sponsored by the mathematics department, both talks are open to the public at no cost and take place in the Keck Classroom (G52), Pettengill Hall, 4 Andrews Road. For more information, please call the college concierge at 207-786-6255.

In addition to her position with the Association for Women in Mathematics, Quinn is on the mathematics faculties at Occidental College, Los Angeles, and the University of Puget Sound and Pacific Lutheran University, both in Tacoma, Wash. She is also co-editor of the Mathematical Association of America’s magazine, Math Horizons.

Quinn has received regional and national awards as a teacher, scholar and author. Most recently, the Mathematical Association of America honored her with one of its three 2007 Deborah and Franklin Tepper Haimo National Awards for distinguished teaching. Her book Proofs That Really Count: The Art of Combinatorial Proof, coauthored with Arthur T. Benjamin (Mathematical Association of America, 2003), received the MAA’s Beckenbach Book Prize.

The annual Richard W. Sampson Lecture at Bates honors the memory of Sampson, professor emeritus of mathematics, known for inspiring his students through his passionate and creative teaching.