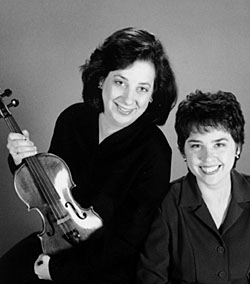 A work by William Matthews, Alice Swanson Esty Professor of Music at Bates, is featured as musicians from the Portland Chamber Music Festival return to Bates for a concert at 8 p.m. Sunday, March 4, in the Olin Arts Center Concert Hall, 75 Russell St.

“Live chamber music doesn’t get any better than this,” a Portland Press Herald reviewer said of the PCMF in 1995. Jennifer Elowitch, a violinist from Portland, and pianist Dena Levine founded the festival in 1994 to bring a new freshness to summer music in Maine — emphasizing contemporary music and hidden gems of the established repertoire, performed by top young players from around the country.

“We are really looking forward to performing Professor Matthews‘ piece at Bates,” says Elowitch. “His love of jazz and excellent sense of humor really come through, and that’s fun for us within the context of the ‘straight’ classical pieces on the program. I suspect the piece will be a real crowd-pleaser.”

In August, the chamber music festival celebrates its 14th season with inaugural performances in its new home, the University of Southern Maine’s Abromson Community Education Center, Portland. Since its inception, the festival has presented more than 70 concerts featuring nationally acclaimed performers and composers from the United States, Canada, Europe and Latin America.

Festival concerts have been heard on Maine Public Radio’s Mainestage and are broadcast each year by WGBH-FM in Boston. The PCMF has been featured on National Public Radio’s Performance Today and carried live on WGBH’s Classical Performances program. The festival will be the subject of a feature story in an upcoming issue of the national Chamber Music magazine.

Strongly committed to new works, the PCMF has twice received grants from the Aaron Copland Fund for Music in recognition of its “contribution to furthering public interest and appreciation of contemporary American music.”

The festival’s 2007 season (Aug. 16–25) includes members of the St. Louis and Chicago symphonies and the New York Philharmonic, along with soloists, chamber musicians and music faculty members from across the country.

The festival presents annual Free Family Concerts in Portland, and has held two adult amateur chamber music workshops in recent seasons. In addition, the PCMF has presented master classes for local students and a workshop for senior citizens.

PCMF executive director and co-artistic director Elowitch, a Portland native, is the assistant principal second violinist of the Boston Pops Esplanade Orchestra and performs regularly with the Boston Symphony. A champion of contemporary music, she has appeared with Boston Musica Viva, Collage New Music and other contemporary ensembles in the Boston area. She is on the faculties of Bowdoin College and the New England Conservatory Preparatory School.

Levine, PCMF artistic co-director, has appeared at the Marlboro and Tanglewood festivals and in series in Europe and Asia. As a founding member of the Laurel Trio, she was a winner of the Concert Artists Guild and ProPiano competitions. She is assistant professor of piano at Seton Hall University and directs the school’s concert series.