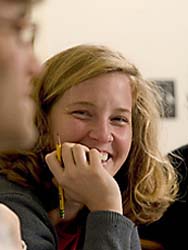 Rebecca Herzig, associate professor in the women and gender studies program at Bates College, received a $57,344 National Science Foundation grant in April for work to be completed in the coming year.

Herzig, a historian of science, will use the grant to support her research into cosmetic or nonmedical applications of recent studies of the human genome.

She is writing a book exploring the social history of hair-removal practices, particularly what such practices represent in terms of relationships between science and society. The NSF-funded research will both advance Herzig’s book and open a new chapter in the chronicle of genetic “enhancements” and their growing presence in everyday life.

Researchers are seeking ways to adapt genetic manipulation techniques to the elimination of unwanted body hair. Not only would such capabilities spell major change for what Herzig describes as the “multibillion-dollar global market in hair removal goods and services”; they would also alter our perceptions of body hair, often a potent indicator of sexual, ethnic, national and socioeconomic identity.

Discussions about the Human Genome Project and its outcomes tend to focus on the potential for treating life-threatening disease, Herzig says. “But there is enormous research and business development activity around nonmedical applications of genomic science. These things don’t get much press coverage or much attention from scholars.”

If hair removal — despite its commercial value — might seem to lack the gravitas to justify an extended investigation, that judgment itself speaks to an important aspect of Herzig’s research. She scrutinizes the bedrock assumptions that people bring to their own and others’ bodies, and by extension, to their ideas about suffering, freedom and the self.

“Rather than drawing a bright line between legitimate medical uses and frivolous cosmetic uses,” she explains, “I want ask the question of how that line gets established and moved around over time.”

For example, in the early 20th century, when women sought medical treatment for excess body hair, “some doctors would describe them as vain, irrational and so on,” Herzig explains. “But the women understood themselves as really afflicted — ‘afflicted’ was the word they used — by this condition. And some of them, when they couldn’t get help from the doctors, would try to kill themselves.”

Hair removal now is anything but tragic — yet, she says, issues around hair removal can shed light on much more contentious, even life-and-death, concerns.

“The essential practice in hair removal is sorting out what is part of you and what isn’t,” she says. “It’s literally using a razor or a depilatory to mark the line between the self and the not-self. And yet because it’s so banal, almost laughable, people are very comfortable talking about that demarcation. It doesn’t seem to raise a lot of ethical or political questions.

“But then the fundamental distinctions about what’s self and what’s not self, and the establishment of practices for maintaining that line, turn out to illuminate the same questions in far more fraught areas, such as beginning-of-life or end-of-life issues. Looking at hair, then, reveals all these quiet ideas about what we really think it means to be fully human.”

She says, “I want to try to figure out how we come to decide which parts of the self are worth disposing or eradicating, and which parts are worth fighting to keep.”

Herzig holds the college’s only full-time faculty appointment in women and gender studies. She is author, most recently, of “Suffering for Science: Reason and Sacrifice in Modern America” (Rutgers University Press, 2005). Her research focuses on the historical relations between technology, gender and freedom in the United States.