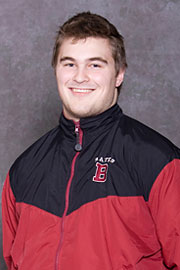 McNeil, a five-time All-NESCAC performer, one-time All-American and the 2007 NESCAC Most Outstanding Rookie Performer placed first in the hammer throw, the discus throw and the shot put (45-04.25). His tosses in the discus (145-02) and the hammer (174-10) were both season bests.

McNeil was named the NESCAC Field Performer of the Week, the New England Small College Athletic Conference announced on Monday.