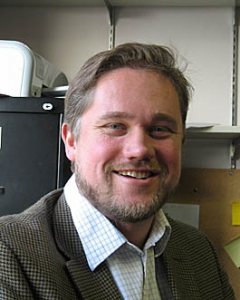 Assistant Professor of Physics Nathan Lundblad is the first member of the Bates College faculty to receive a Defense Experimental Program to Stimulate Competitive Research (DEPSCoR) grant from the U.S. Department of Defense.

Sponsored by the Air Force Office of Scientific Research, the grant is for $388,088 over three years. It will fund Lundblad’s research into atomic activity at ultralow temperatures. Bates is the only liberal arts school in the nation and the only academic institution in Maine to receive a DEPSCoR grant this year.

It’s well-established that certain materials become extremely efficient electrical conductors — superconductors — when cooled well below freezing. But why particular materials behave this way at such temperatures, potentially suitable for practical application, isn’t clear. Lundblad hopes to better understand this phenomenon by taking it to the extreme: He will study the subatomic behavior of matter when cooled to about 100 billionths of a degree above the temperature, roughly 460 degrees below zero, where atomic motion ceases — absolute zero.

Text continues below the video

“It’s an experimental area where the laws of quantum mechanics, the natural laws that govern the behavior of particles on extremely small scales, become dominant,” he says. “These laws can be very weird and counterintuitive.”

Lundblad plans to observe a sample of ultracold gas called a Bose-Einstein condensate. At such low temperatures, the locations of the gas atoms become fundamentally indistinguishable. With the gas confined in a vacuum chamber, he will use laser beams to create “optical lattice traps” that simulate the complicated behavior of electrons in high-temperature superconductors.

While any applications of the research won’t come for quite a long time, the work could support important technological advances. “An electrical grid made of a high-temperature superconductor, for example, could be immensely cheaper than our current system,” he says. Timekeeping and other measurement systems could also benefit.

Any military applications, Lundblad adds, would be nonspecific and on a long time scale. “I like to think of ultracold atoms as a field similar to the laser in the 1960s — a hotbed of research, but nobody knew quite what to do with them yet.”

The Department of Defense takes the long view, he explains. “Similar to its funding of research related to creating the Internet, they figure that spending research dollars advances the cause of the country in general, and if they reap some technological benefit 30 years down the line, so be it.”

For aspiring researcher Ducommun '11, senior thesis is a springboard to graduate school