Here’s a reward for getting up real early Monday morning: a chance to see a bit of Bates streak into space.

At 4:39 a.m. EDT, a cargo spacecraft takes off from NASA’s Wallops Flight Facility in Virginia. Its destination: the International Space Station. Its payload: a laboratory that will conduct an experiment in ultracold physics for Bates physicist Nathan Lundblad.

Lundblad is one of the few scientists, and the only one from an undergraduate college, chosen to have his research conducted by the Cold Atom Lab in the CAL’s initial experiments aboard the space station. Nature magazine calls the lab a “playground in space” for quantum physicists like Lundblad. 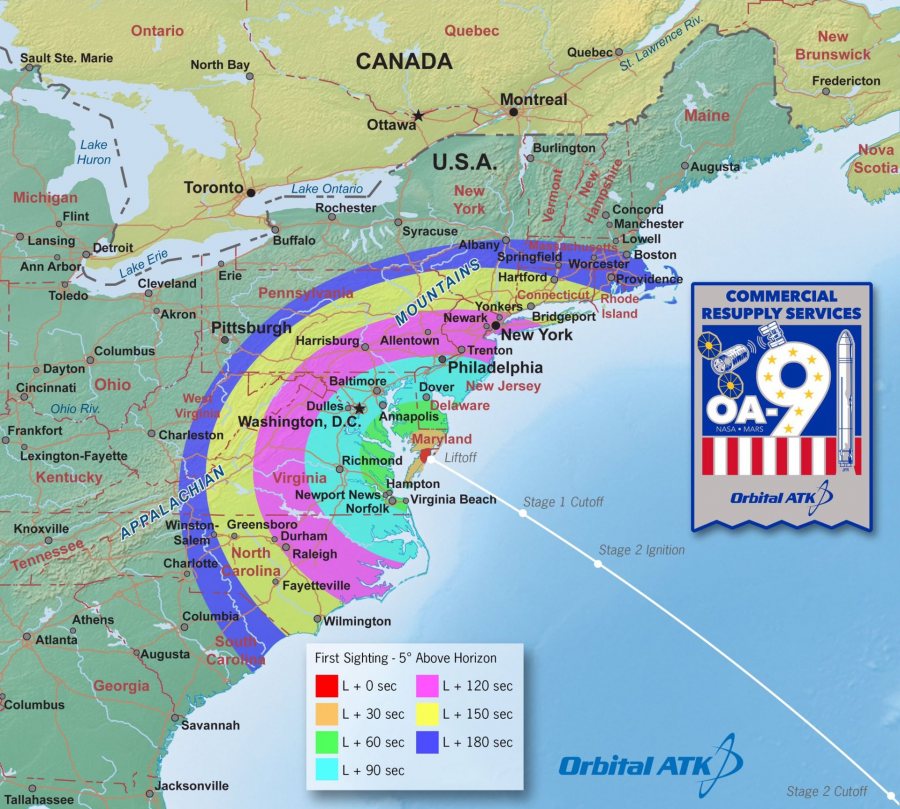 This map of the U.S. East Coast shows when and where the launch will be visible of a cargo spacecraft that’s delivering a Bates physics experiment from NASA’s Wallops Island Flight Facility to the International Space Station. The launch is at 4:39 a.m. May 21. (Courtesy Orbital ATK)

Even hundreds of miles from the launch site, the rocket might be visible on the horizon. “Check the southern skies about three minutes after launch, about five degrees above the horizon,” says Noah Petro ’01, the NASA project scientist for the Lunar Reconnaissance Orbiter mission, now orbiting the Moon.

“If you are in the right area, it will appear as a small dot of red light traveling much faster than an airplane with no blinking lights. You’ll want to be in an area with a clear horizon and away from bright lights.”

+How to Watch Bates Rocket to Space

What: Launch of the Orbital ATK Antares cargo spacecraft — with Bates aboard!

The Mission: Officially known as Orbital Sciences CRS Flight 9E, or OA-9 for short, the mission carries the new Cold Atom Laboratory and other equipment and supplies to the International Space Station and the six astronauts currently orbiting the Earth.

How to Watch: The launch will be televised by NASA TV. The flight facility also offers a public viewing area.

After the Launch: The space station’s orbital path takes it around the world 16 times a day, and it’s periodically visible at dawn and dusk. “You can sign up for alerts from NASA or by downloading the NASA app to see when sighting opportunities will occur,” Petro says. “Just know that in the coming weeks, a small part of Bates will be flying overhead!”

“I’m insanely proud of Bates. This is all about the power of science at Bates,” Petro said from the Goddard Space Flight Center on Thursday. “Here I am at Goddard, a member of the NASA science community, and Bates is part of this really cool opportunity.” 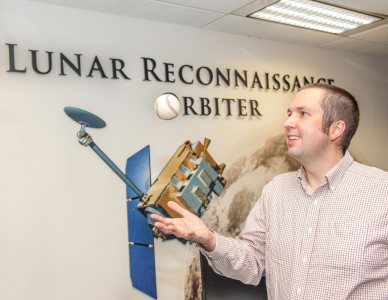 Scientist Noah Petro ’01 represented NASA at a minor league baseball game in Oregon last August that had an “eclipse delay” because of the total eclipse of the sun. (Photograph courtesy NASA/W. Hrybyk)

He’s proud of the Bates-into-space launch, he says, because it reaffirms what he and others at NASA know well. “We Batesies — all of us liberal arts grads — do really great science,” Petro says, noting that a liberal arts graduate just down the hall trains the astronauts now aboard the ISS.

“This is not about putting Bates on the map of science teaching and research. It puts yet another Bates pin in the map.”

Petro earned a doctorate at Brown; his dissertation was “Provenance of Lunar Regolith Components: Redistribution of Material by Craters from the Heavy Bombardment Period through the Copernican Era.”

“Bates is just as preparatory for a career in science as any other institution in the country,” he says. “In fact, Bates may do it even better. But that’s just my opinion!”

“This does not put Bates on the map of science teaching and research. It puts yet another Bates pin in the map.”

Here are seven things to know about Lundblad’s research aboard the space station.

1. Once it’s plugged in, the Cold Atom Lab will be the coldest known environment in the universe.

As its name suggests, the lab will be very, very cold — one ten-billionth of a degree above absolute zero.

Physics major Dan Paseltiner ’16, one of Nathan Lundblad’s former thesis students, narrates this short film about the Bates experiment that will be aboard the Cold Atom Laboratory.

2. The lab will operate only when the astronauts are asleep.

Once the CAL reaches the ISS, the astronauts will hook it up. After that, it’s mostly hands-off, partially because the astronauts’ day-to-day movements actually move the space station itself, disturbing the stillness the lab needs to work properly.

“They decided, let’s run while the astronauts are sleeping,” Lundblad said. “It will be essentially remotely controlled.” 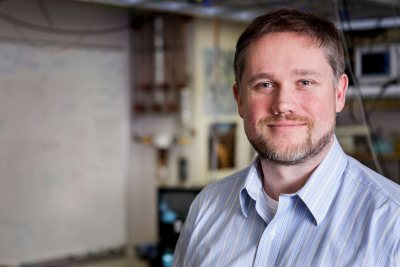 4. Lundblad will study a form of matter that can’t exist on Earth.

Lundblad works with Bose-Einstein condensates. BECs are ultracold clouds of gas whose atoms lose their individual characteristics and behave more like a unified wave. He can study them in pretty cold environments on campus, but without gravity he can go even colder.

“I’m interested in studying how the rules of quantum mechanics apply to a BEC based on its shape, and certain shapes are really tough to make in gravity,” he said in 2014.

“I’m looking to make a BEC in the form of a shell or bubble, and then study how quantum mechanics applies to a system that is two-dimensional, but without a border, like the surface of the Earth.”

5. When gravity goes away, other forces come to the fore.

In designing his Cold Atom Lab experiments, Lundblad had to take into account the magnetic field of the lab itself. That, for him, is a first.

“Gravity is the dominant force in these experiments down here. But in free fall, all of a sudden you’ve eliminated this enormous whopping gravitational force,” he says. “All these other little details begin to be important.”

Lundblad created an experimental sequence that the Cold Atom Lab will run. “Within a couple days, I will get a data dump,” he said. “The data comes in the form of, essentially, images of these cold clouds, tagged with something like, ‘OK, you designed experimental sequence 455 with all these particular parameters, and here’s the picture that resulted.’”

7. Bates students will be involved.

Like many Bates science faculty, Lundblad involves students deeply in the research. When the Cold Atom Lab data comes in, “I’ll want to probably have a few late nights with some of my thesis students in the fall, trying to figure out, ‘Did that do what we thought it would? Is this looking like some of the effects we’re looking for?’”