On May 5, 1970, Bates students gathered in the Chapel and after much debate approved, 220 to 140, a resolution to hold a three-day strike to protest the U.S. invasion of Cambodia and the killings of four Kent State students on May 4.

Millions of their peers voted the same way across the country, closing hundreds of U.S. colleges.

Three days later, on May 8, Bates president Thomas Hedley Reynolds surprised everyone by climbing into the cab of a donated U-Haul truck to lead Bates students on one of their strike projects: a downtown Lewiston trash cleanup. With that act, Reynolds, who died Sept. 22, 2009, at the age of 88, defined his Bates presidency and the unusual character of the Bates strike. 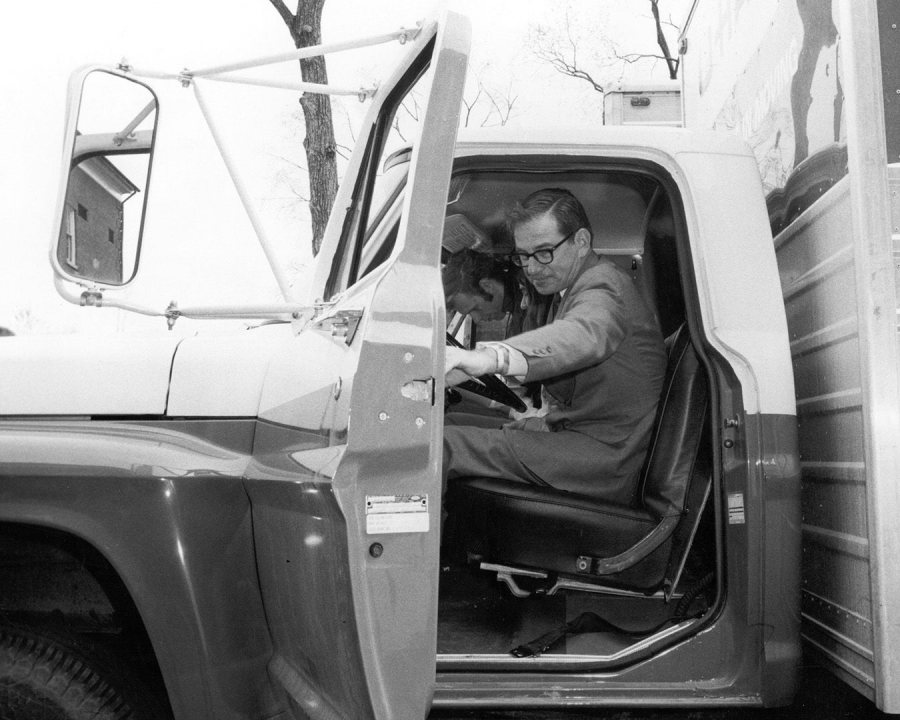 In May 1970, Bates President Thomas Hedley Reynolds climbs into the cab of a donated U-Haul truck to lead Bates students on a strike project: a downtown Lewiston trash cleanup. (Muskie Archives and Special Collections Library)

As president, Reynolds always had “his hand very much on the tiller,” said John Cole, the Reynolds Professor of History and one of the first faculty members hired under Reynolds, in 1967.

Yet Reynolds was also the president who widened the circles of authority at Bates, acknowledging the voice of students and faculty. Before and during the strike, Reynolds participated in strike discussions and championed the students’ course of action to the media.

On some campuses, the 1970 strike was violent. Clashes between students and police and the burning of ROTC buildings were not uncommon. Bates was perhaps at the other end of the spectrum: Uneasy with what The Bates Student described as “the factionalization caused by the word ‘strike,’” students instead vowed to engage in constructive, nonviolent, community-building actions.

“We are not out to destroy this nation — it could do that quite well without us,” wrote Bates Student editor-in-chief Allen Bourque ’71 in an open letter published in the paper’s special May 12 issue. “We are asking you to join us in attempting to save this nation and perhaps to alter the course of history.”

John Shea ’70 told the Bowdies that the strike’s duration was less important than the quality of student action during the strike.

The tempered Bates response — “Work with Us” was the motto — was not without its detractors. On the strike’s second day, Bowdoin students visited campus and, according to the Student, “harangued” the Batesies for not approving an indefinite strike. John Shea ’70 successfully argued the Bates position, telling the Bowdies that the strike’s duration was less important than the quality of student action during the strike.

The trash cleanup — a project chosen after the city canceled its annual cleanup for budget reasons — took place on the third day. Reynolds led the way in the U-Haul truck, which had a handmade banner reading “America First” draped on the side. The truck was donated by a local service station.

Downtown, the Bates crew, which also included some faculty and a smattering of Lewiston High School students, gathered at Kennedy Park on the corner of Park and Spruce streets. There, it is believed, Reynolds explained why he joined the students.

“[The students] are trying desperately to show the rest of the community their real concern,” he said. “I came down this morning driving the first truck because I share that concern.” 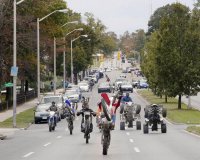