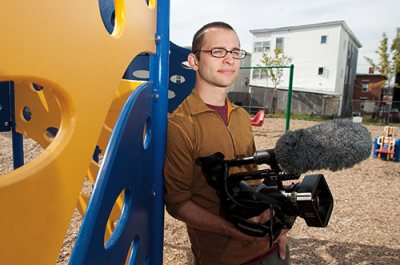 It was noon on a steamy summer day in downtown Lewiston’s new Knox Street Park, and Craig Saddlemire ’05 stood on the sidewalk, grinning at the lively scene before him.

Two young mothers chatted as they pushed their toddlers on the swing set, and a half-dozen other children skipped around the pocket playground, their own moms relaxing on nearby benches. A woman who lives in the multifamily house next door called over the fence to a big boy pedaling a small tricycle, asking him to return it to her yard when he finished playing.

Knox Street Park, along with an adjacent vegetable plot built by Lots to Gardens, the gardening and youth development program founded by Kirsten Walter ’00, are the latest success stories in this neighborhood’s journey to self-respect and empowerment.

“Getting this playground and the easement for the community garden represents a significant investment on the part of the city,” explains Saddlemire. He was giving a tour of the block, a mix of mill-era wood-frame tenements and contemporary low-income housing about a mile southwest of the Bates campus. “It shows a commitment to not knocking down the neighborhood.”

The story of how such destruction almost happened — but did not — is the focus of Saddlemire’s recent documentary movie, Neighbor by Neighbor: Mobilizing an Invisible Community in Lewiston, Maine. The movie chronicles the grassroots strategizing, petitioning, and demonstrating that began in June 2004 after the city of Lewiston unveiled plans for a sweeping downtown urban renewal project.

Dubbed the “Heritage Initiative” (without apparent irony), the project featured, among other things, a four-lane boulevard bisecting a densely populated half-square-mile neighborhood in order to improve access to the civic center and a bread factory whose yeasty aroma wafts along the patched streets.

In announcing the project, then-Lewiston Mayor Lionel C. Guay promised that the Heritage Initiative would honor the historic neighborhood’s “wonderful heritage” and make it “a more desirable place in which to live and raise a family” — in part by razing the homes of 850 residents to reduce population density. His remarks carefully demonized the inner-city neighborhood, characterizing it as a transient-filled area that had “lost its self-esteem and its zest for quality of life.”

“For the first year I was pretty much a fly on the wall. The more I stuck around, the more interesting it got.”

The movie tells how people in the neighborhood came together to establish their identity and block the project. It also shows how the area has changed through the past five years thanks to its residents’ newfound activism.

For Saddlemire, who settled in the neighborhood after graduation and makes videos for nonprofit organizations through his production company, Round Point Movies, creating the documentary changed his life.

He was a Bates senior who had rarely ventured off campus when a friend told him that a working group of roughly 40 residents, dubbed the Visible Community, sought a volunteer to videotape their activities for the historical record. Broadcast on public access television, the footage initially was a tool to inform citizens and to hold public officials accountable.

“For the first year I was pretty much a fly on the wall,” Saddlemire says. “The more I stuck around, the more interesting it got.”

“It became my life to a large extent,” says Saddlemire, who has also represented the Visible Community on various municipal committees. “Living in the community gave me a much deeper appreciation for what was going on.”

Saddlemire’s documentary has quickly found its way into urban planning, economics, and anthropology classrooms in colleges from Maine to California. A lively question-and-answer session followed its screening at the Social Justice Cinema Film Series at the University of Maine–Farmington, said organizer John Messier, whose economics students continued the discussion in class the next day.

“It shows a clear distribution effect: There was a neighborhood in the way of a business deal,” Messier says. “We see a community figuring out how to organize and use their power to get a seat at the table.”

The documentary “makes you want to get involved in the neighborhood even if you don’t live there,” says Anne Kreig of the Maine Association of Planners, which gave the movie its 2009 Project of the Year Award. “It speaks to different age groups, including people in their 20s and 30s — an especially tough age group to engage.”

At Loyola University Chicago, it’s being used in a course on community-based research and leadership. “Neighbor by Neighbor is an example of authentic community-university collaboration,” explains teaching assistant Ashley Kehoe. “It demonstrates the knowledge, power, and agency that community members hold, as well as the potential that college students have to be actively engaged in local issues.”

At Bates, where the story has special resonance, Associate Dean of Students Holly Gurney plans to use the movie to introduce first-year students to recent Lewiston history. Likewise, Associate Professor of Anthropology Elizabeth Eames believes Neighbor by Neighbor will prepare students in her economic anthropology course for their community-based research.

Back at Knox Street Park, whose construction is one of the more recent developments covered by Neighbor by Neighbor, Saddlemire considered the camera’s role in helping a community organize to save its buildings, playgrounds, and gardens.

“The documentary has given the group a way to reflect on their accomplishments,” he says. “It validates their work and legitimizes them in the eyes of the greater public. People see it and they are inspired by what others with few resources were able to do.”

He also reflects on his own path from Bates student to Lewiston citizen.

“Like a lot of Bates students, I had misconceptions about what Lewiston had to offer. I learned it was a much more attractive community than I’d thought it was.”