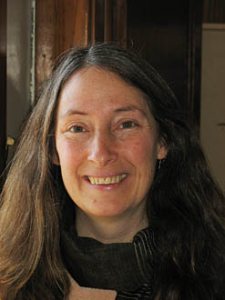 “Identity terms” are the words that people use to affiliate themselves and others with particular groups — ethnic, racial, religious, social and so on.

Cynthia Baker, associate professor of religious studies at Bates, recently received $50,400 from the National Endowment for the Humanities to support her research into one of history’s most fraught identity terms: “Jew,” a word that can convey praise, pride, prejudice or pure description.

No studies exist that analyze the use and the historical development, from ancient times through the postmodern era, of that term, Baker says. The NEH grant will enable her to research and write a book slated for publication in the “Key Words in Jewish Studies” series published by Rutgers University Press.

The book will map the emergence, evolution and current permutations of the term “Jew.” Baker’s yearlong research will involve experts and archives in the U.S., Europe and Israel, among other resources. She will examine ancient inscriptions and conduct art-historical analyses of images of Jews including those from medieval European churches, manuscripts, modern cartoons, propaganda and current pop art.

“The project is important both in its specificity and as a case study for analyzing the dynamics of identity formation and attribution,” Baker notes in her proposal for the grant. “Who decides the content of identity terms, and how does that content come to be generated over time, within and across societies? How is it that a single identity term — ‘Jew,’ for example — can be made to convey such a broad range of (often diametrically opposed) meanings?”

She notes that worldwide political and social developments make this research more compelling than ever. “In an age of ethnic nationalisms, mass migrations and identity formations across national lines, understanding the dynamics of collective identification becomes an increasingly urgent concern,” Baker says.

Baker will carry out her research in several phases, including the examination of ancient evidence for the origins of the term “Jew,” and the exploration of the term’s many overlapping and competing definitions over time — Christian, anti-Semitic, nationalist, etc.

Baker earned her B.A. at Wesleyan, master’s degree at Harvard, and doctorate at Duke. She has taught at Duke, Cornell, Swarthmore and Santa Clara University. Her research explores ideas about gender, ethnicity and nationalism in the formative periods of Judaism and Christianity and in modern historiography on these periods. Her book Rebuilding the House of Israel: Architectures of Gender in Jewish Antiquity was published by Stanford University Press in 2002.

Baker’s NEH grant is called a Fellowship for College Teachers and Independent Scholars.

The National Foundation on the Arts and the Humanities Act of 1965 established the NEH. An independent federal agency of the United States government, it is dedicated to supporting research, preservation, education and public programs in the humanities.