With finals looming the next day, the Bates Outing Club clambake at Popham Beach on May 24, 1953, offered one last chance for some sun, fun, and suds. 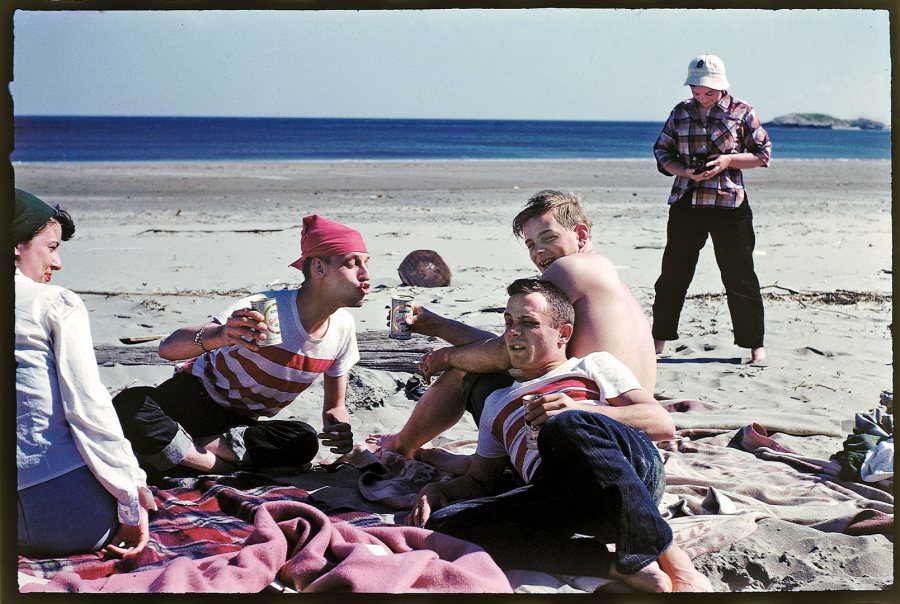 This was a day after Mayoralty’s conclusion, and the striped shirts worn by Lenny Chase ’53, at left, and Bill Laird ’54, leaning against John Sturgis ’53, reflect the pirate-themed campaign of Lev “Jolly Roger” Campbell ’55 (Chase’s bandana was also part of the getup).

The “pirates” had won the campus vote over the campaign run by “Captain Walt” Reuling ’54 that evoked Show Boat.

The ’53 clambake was true to its name: Unlike later iterations, lobster wasn’t on the BOC menu, just clams and burgers, and Lenny was in charge of the clams. A clambake neophyte, he bought bushels and bushels, “and cleaned them in the dorm shower,” recalls Katie Day Chase ’53, at left, who would marry Lenny a few weeks later. “People raved about them!”

“We drank whatever was cold and available!”

The suds being swilled in this photo are Ruppert Knickerbocker and Krueger Extra Light Cream Ale. The Bates boys could have been sipping other popular beers of the era, such as Narragansett or Ballantine or Genesee. “We drank whatever was cold and available!” says Laird.

While on-campus drinking was a no-no in the 1950s, “off-campus was different,” says Laird, who recalls the “user-friendly” establishments downtown that served under-21 Batesies.

There was Steckino’s on Lisbon Street and, of course, the Blue Goose, where Laird recalls a post-library ritual of dimeys (dime draft beer), fried-egg sandwiches, and boxing on TV.

The Bates friends drove to Popham that day in Lenny’s 1940 Olds, named Betsy. In fact, the Batesies who traveled in Betsy that day paired off in marriage. Besides Lenny and Katie, Bill Laird married Carolann McKesson Laird ’54, who shot this photo; and John Sturgis married Barbara Earl Sturgis ’53, seen at right in the photo.

The BOC clambake did seem to be date-driven in the 1950s. Clambake chairman Frederick Russell ’53 told the Student that he hoped groups of students would come to Popham and that the event was “not only for couples.”

Perhaps the many and sturdy Bates marriages like these helped give rise to the myth of the Bates marriage “statistic” — see our story on that topic and our story about what’s happened to the sandy expanse of Popham Beach since the 1950s. — HJB