For many decades, February at Bates has been the month of Winter Carnival.

Created by the Bates Outing Club in its founding year of 1920, Winter Carnival hit its stride in the 1930s. Fueling the fun was the fact that the event took place during a brief breather between the first semester, which in those days ended in late January, and the start of the second semester.

The Bates Outing Club’s 100th anniversary year in 2020 offers a chance to celebrate the past, recognize and reinforce today’s connections, and build lasting interconnectedness for the future.

If a sporting event could be done on bare ground, Bates students in the 1930s were probably trying it on skis, skates, and snowshoes during Winter Carnival.

Take a look at these brief video clips, most from the epic 1936 Carnival, which ran from Thursday, Feb. 6, to Sunday, Feb. 9.

The Bates Student promised that “all winter sport enthusiasts — professors and students alike — will welcome the opportunity to forget the exhausting restrictions of exams and substitute in their place a charmed but brief reign of the queen of the 17th annual Bates College Winter Carnival.”

The crowning of “the supreme ruler of the Winter Carnival” took place on the first night of Winter Carnival, during a dance in Chase Hall propelled by the music of the legendary Bates house band, the Bobcats.

The queen was chosen by the Outing Club directors for “all-around outdoor ability, her interest in sports, and her general attitude,” the Student reported.

The 1936 Student blared this headline, “Coeducational dinner will be opening feature for winter sports weekend”!

With that, the two single-sex dining halls, Commons in Chase Hall and Fiske Dining Room in Rand Hall, offered on the opening night of Winter Carnival a Bates rarity in those days: coed dining.

Held on Saturday morning, the Interdorm Meet of 1936 featured ski and snowshoe dashes and an obstacle race, seen here.

Tobogganing had gained favor among students in 1936, The Bates Student reported.

In an era where Bates had separate dining facilities for men and women, and where dancing had been allowed only for about a decade,  tobogganing was a way for students to get close to one another.

“It is a rare moonlit evening these days that does not find numerous couples of gaily snowsuited coeds and warmly muffled eds dragging a toboggan toward Pole Hill,” the Student reported in 1936.

Pole Hill, by the way, is the rise of land north of Bates, along the northern part of the traditional “three-mile loop.”

In the vast expanse of the searchable internet, the phrase “lollypop rush” appears just 193 times. But in the analog days of the 1930s, the Lollypop Rush — a dash up Mount David, where the first man and woman could claim a large lollipop — was on the lips of most students.

The Student reported that the event was modeled after a Worcester Polytechnic Institute event known as the freshman-sophomore “paddle rush.”

The Student promised that the 1936 snowshoe football game, held Friday morning and pitting seniors against underclassmen, would be “marked by fumbles, intercepted forward passes, etc., by players who have never had the experience of playing this great American pastime on snowshoes.”

In many years, the Outing Club created a skating rink between Garcelon Field and Alumni Gym.

In 1936, crowds gathered between Cheney House and the President’s House to watch these jumpers.

This unidentified student sweeps newly fallen snow from a sculpture of Hathorn Hall created by the residents of Whittier House, an all-female house in those days.

The 1936 carnival ended on Sunday with an open house, including tobogganing, at the Outing Club’s erstwhile cabin at Thorncrag Sanctuary. 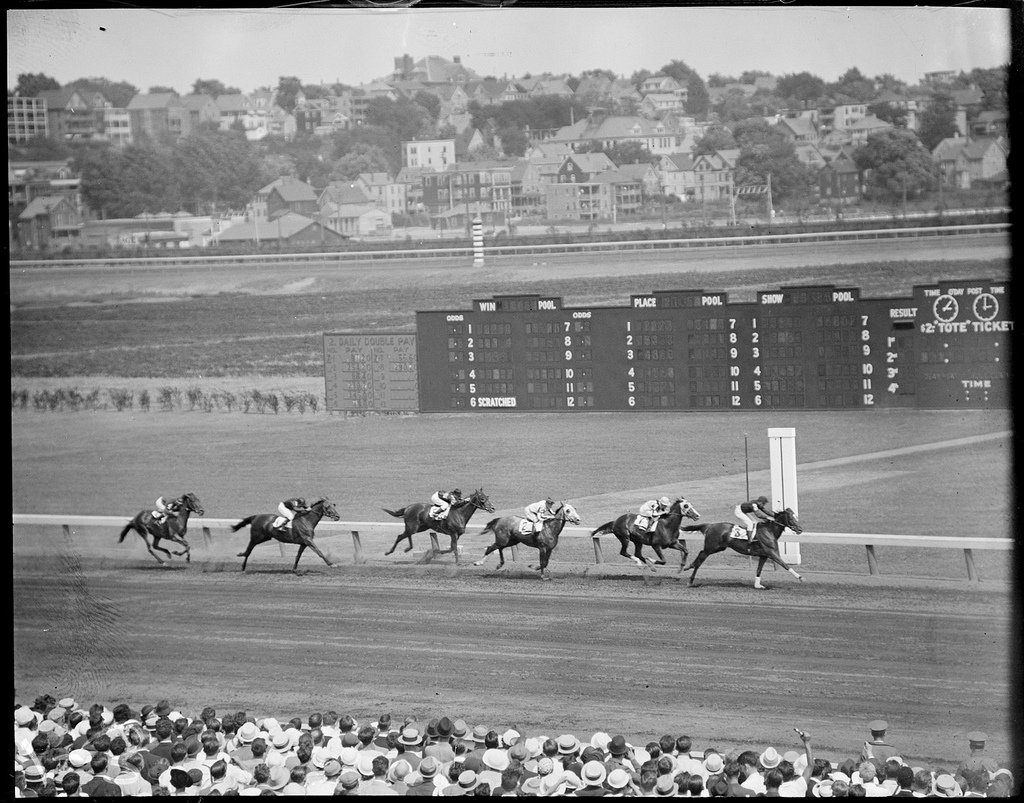