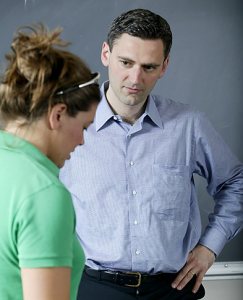 Winning makes us happy? Not so fast, says Associate Professor of Sociology Francesco Duina, author of Winning: Reflections on an American Obsession.

In interviews prompted by his book, Duina explains that Americans’ zeal for victory, whether on the playing field or at the ballot box, leads us not to contentment but toward antagonism.

Interviewed by the public radio show The Academic Minute, Duina notes that most surveys find that American’s are not a happy lot. “We are an anxious and worried people.”

A possible reason is linked to “our love of competition.” In much happier countries like Denmark, Duina notes that “children are taught lessons that to Americans sound almost offensive: that they are not to stand out and not to believe that they are good at anything.”

Yet in America, social pressure to compete, win and shine above the rest “creates its own enormous tensions and problems. We develop assumptions about the world, that we should approach others with an antagonistic mindset.”

Duina, who chairs the Bates sociology department, tells Lewiston Sun Journal reporter Dan Hartill that his goal with Winning, his fourth book, “was to figure out what the language of competition is all about.”

Interviewed by The Portland Press Herald, Duina says another result of a winner uber alles mindset is that the victor believes that “I win, therefore I’m right.” Yet it is flawed logic, he says, to “believe if we win at something then our world view in general is right. ‘I’m right, in general, if I win at basketball. I win the election to become governor, then I must have the right mindset.’… But it’s not that clear.”

With Justice for All in Our Multicultural Nation