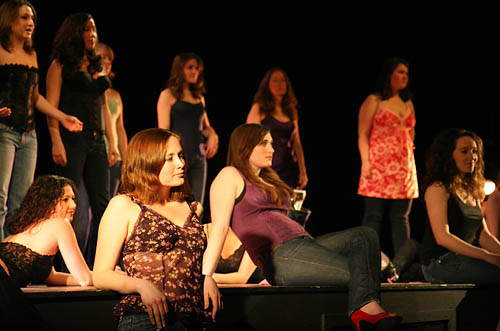 For the 11th year, Bates students are supporting efforts to reduce domestic violence with a production of Eve Ensler’s The Vagina Monologues, in performances at 7:30 p.m. Friday through Sunday, Feb. 11-13, in Gannett Theater, Pettigrew Hall, 305 College St.

Tickets are $5 and available at the door. Proceeds will go to Safe Voices, an Auburn nonprofit that supports victims of domestic violence. Formerly known as the Abused Women’s Advocacy Project, the organization changed its name to emphasize its gender-neutral mission.

For more information about the production, please contact srooth@bates.edu.

The play is produced by the Robinson Players, a student-run theater group. This year’s show debuts the directing skills of Marketa Ort ’13 of New York City. Ort has done much acting at Bates, including the 2010 production of Vagina Monologues and theater department productions of All the World’s a Grave and Fuddy Meers.

“I’m so happy to have had this experience,” Ort says. Going from acting to directing, she says, has “given me a new outlook on theater.”

Performed every February, the Bates production takes place around Valentine’s Day and harmonizes with the national V-Day campaign to stop violence against women.

Ensler based The Vagina Monologues on interviews with more than 200 women about their sexuality, their bodies and their stories of violence and sexual abuse. The result is a collection of women’s stories that are personal yet universal, comic and poignant, brazen and mysterious.

The play premiered 15 years ago and has since enlightened, shocked and entertained audiences all over the world. Variety magazine called it “spellbinding, funny, and almost unbearably moving. …Written with a bluntness that is nevertheless intensely lyrical, it is both a work of art and an incisive piece of cultural history, a poem and a polemic, a performance and a balm and benediction.”

In 1998, Ensler founded the organization V-Day to parlay the play’s success into an effective force for social and political change.

The Bates actresses will also sell chocolate lollipops at the college’s dining Commons to raise funds. Ort notes, “When students donate money to a cause, it makes more Batesies want to participate, and I love that about this college community.”