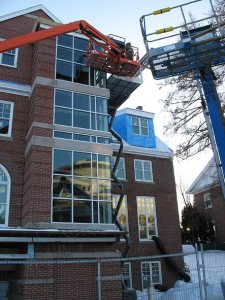 The renovation of Hedge and Roger Williams halls boasts a long list of environmentally sustainable measures. Many are aimed at maximizing energy efficiency in the completed buildings, such as automated lighting controls and solar-heated domestic water.

Others have diverted from the waste stream all kinds of materials discarded during the renovation process. Most of the old window units, for instance, were taken by an architectural salvage company. Discarded wood was chipped by the ton and burned as biomass fuel (with any nails left in the wood being picked up by magnets so the metal could be reused).

But not all the old wood went up in smoke. Some will come back to Hedge and the Bill in the coming weeks: old roof timbers that have been remilled and nicely finished for use as window sills.

The sills will afford a way to remember the buildings’ old bones, now substantially replaced by steel and brand-new lumber. “We haven’t settled on the final look” for the sills, says project manager Paul Farnsworth. “But they will have some character, with the stains where the nails were and that sort of thing.”

At Hedge Hall, the big news is the completion this week of the “storefront” — glass walls to us civilians — on the stair tower facing Alumni Walk. Three stories tall, the glass was substantially done by Feb. 28 or so, with workers continuing to ride cherry pickers into the air to touch up trim during the week. 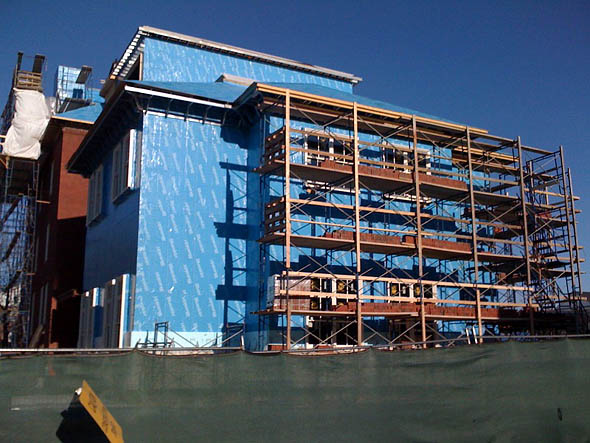 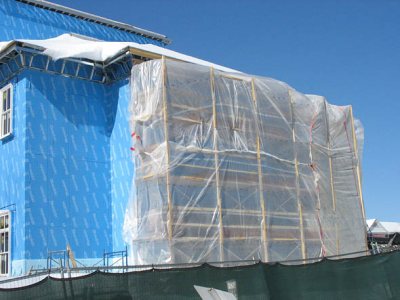 Above the stair tower, still on the Alumni Walk side, roofers are progressing with the dark-gray slate that is covering the building. They’ll head over to Roger Williams soon.

Below the tower, work proceeds on the new entrance, comprising a glassy vestibule bracketed by brick piers that, Farnsworth reports, have just been finished.

Inside Hedge, the room-building machine chugs on. Walls are getting their first coats of color paint and bathrooms their tile. The electrical rough-in is done, and the plumbing is largely so, with the installation of fixtures the remaining step. And, Farnsworth notes, cabinetry will be showing up soon.

Across the frozen tundra at Roger Williams Hall, the building’s second set of stairs is being built as this is written. If you stand on the Library Quad facing the stair tower, which is that open section between the brick-red and Blueskin-blue portions of the Bill, the gray metal you see zig-zagging upward is part of the stairs. 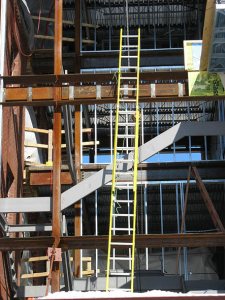 As of March 2, they had the zig-zagging stringers and the “pans” — into which concrete will be poured to form stair treads — done up to the third floor, Farnsworth says.

You can also see silvery metal wall studs in the stair tower, as an interior wall will partition the tower from top to bottom. Project planners considered using glass for that interior wall, but the fire-rated glass specified by the building code would have been too expensive.

Also conspicuous is the plastic wrap that workers have draped around the Roger Williams addition in recent days. As we have explained before, the plastic will hold in heat, which allows mortar to cure properly, which means the brickwork doesn’t fall apart, which means that masons can keep laying brick and granite without their work turning into a Three Stooges routine. “The mortar the merrier!” “Ow!” etc.

The room-makers are also going like gangbusters inside the old section of the Bill — hanging sheet rock, running pipes and wires. (But that work will come later in the addition.) A fourth-story ceiling designed to contain insulation below the roof is pretty much finished, clearing the way for the wall-stud guys.

Speaking of energy efficiency, the blown-in cellulose insulation will make a layer more than a foot thick, Farnsworth says. With a minimum R-rating of 42, it’s a far cry from the years when the heat went right out the roof. 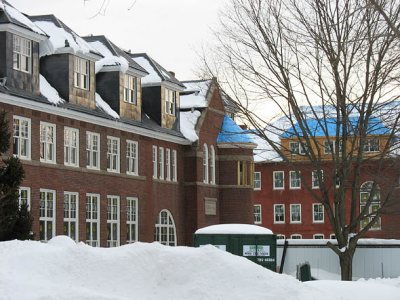 And the Bill’s elevator is being put together as this is written. But it, like Hedge’s lift, won’t go into service until late in the renovation, when the building’s phone system is online, which is needed for the elevator to pass inspection. Such are the ups and downs of the construction business. Ow! I’m sorry, Moe!