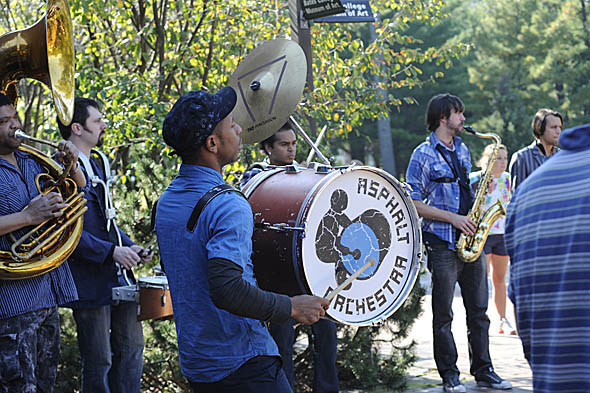 On an October day that could have passed for August, Bates marked the 25th anniversary of its Olin Arts Center with a family arts festival.

And while the attractions included a marching band, popcorn, balloon animals and juggling, the festivity was much more than just another day at the circus.

The headliners, avant-garde marching band Asphalt Orchestra and the New Vaudeville act Two, managed both to honor the long traditions they represent and to show them in a new light. Maine natives Matt and Jason Tardy, aka Two, delivered their juggling and acrobatics with astounding skill, but also with edgy humor about show-biz conventions and performers’ egos.

“They convey the fact that there’s more behind it” than just the mechanics of their art and of creating a spectacle, said concert hall manager Seth Warner, who organized the Olin celebration.

Meanwhile, Asphalt Orchestra took the exhilarating energy of a half-time show and shifted it into a whole other realm. 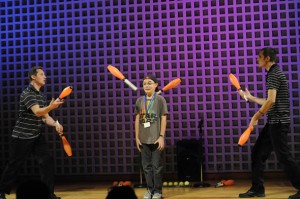 Jason and Matt Tardy, aka Two, are joined by a young guest artist during an Olin Arts Center anniversary performance. Photo: Jose Leiva.

The band skipped Sousa and Top 40 in favor of world music and tunes by Björk and Frank Zappa. The arrangements left plenty of room for soaring jazz solos. And, eschewing uniforms for a blue-gray-black pastiche of denim and vintage garb, the 12-piece Asphalt showed in ways other than its name the awareness that a marching band’s home is the street.

In short sets on the Olin terrace, the band whirled and marched right into the crowd of students, kids and parents, many of whom played along on drums that Warner had set out.

Asphalt’s dance party tendency gained a new dimension as students from Rachel Boggia’s dance improvisation course performed during one set. Exploiting the grass and stone steps of the Keigwin Amphitheater, the dancers flowed and pivoted up and down, periodically flinging themselves at the feet of the musicians, who in turn brought their own choreography to the encounter.

This burst of energy on the banks of Lake Andrews was a high point of the day. And it was even more improvised than anyone had expected, Boggia said later. The dancers had planned to perform indoors, in the Bates Museum of Art, but “it seemed like everything was happening outside” — so they quickly revised their plans to work with Asphalt on the amphitheater.

“It was a great opportunity for them to realize that not everything goes by the rules.” After the dance, Boggia adds, Asphalt drummer Nick Jenkins shared nice thoughts about the occasion: “It seems like you have a really vital arts community here at Bates.” 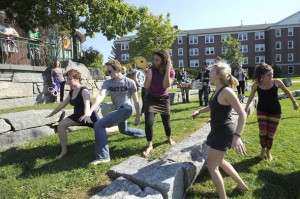 The Tardys, of Buckfield, combined juggling, acrobatics, contortion — Matt threading himself through the ruptured mesh of a tennis racket, for instance — all set to thumping techno-pop tracks created by Matt. “This is so — dangerous!” Jason said as his brother began to juggle three knives. “Notice how Matt catches them by the handle part, not the shiny metal part.”

One of several bits in their show, the knife routine consisted of one Tardy juggling the blades while the other commented. Periodically they would trade roles — a brother tossing the knives to the other and getting the microphone in return, all juggling, all the time. The absence of lacerations was impressive, as was a mock mic mixup in which Matt, juggling the mic and two knives, managed to time his remarks to Jason just as the mic flew past his mouth.

Inside the arts center, families mingled with Bates students and faculty in the lobby amidst the buttery smell of popcorn. People of all ages sported the wearable balloon art made by Margaret Foster, of Portland, and face-painting and paper airplane-making were also on offer.

With the a cappella Merimanders contributing a well-received performance, the art museum open, and more music on tap from a jazz trio led by pianist Ahmad Hussan Muhammad, Warner’s intent was to offer arts for all tastes. In particular, he said, “I wanted to open it up to all ages.”

The day ended with Asphalt. Inside Olin, their performance was formally excellent, all pristine playing and solemn choreography. A high point, delivered as the musicians formed a long straight line across stage front, was Björk’s elegiac “Hyper-Ballad.”

But the proceedings seemed stiff, and after a few numbers alto sax player Ken Thomson announced the return to the terrace for the remainder of the set. The band led us out for a few more songs — and wound up a sparkling day at Bates with a hopping Balkan polka, Goran Bregovic’s “Champagne.” 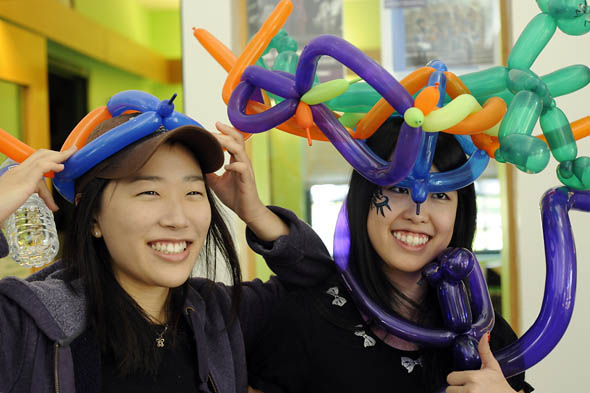 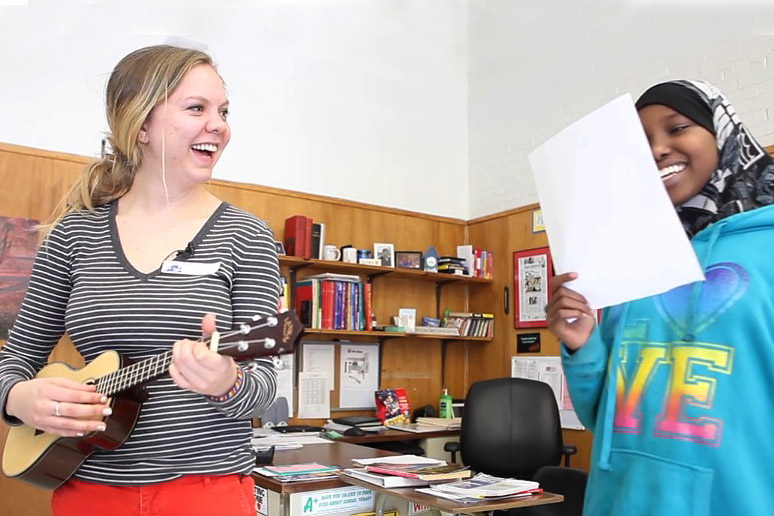 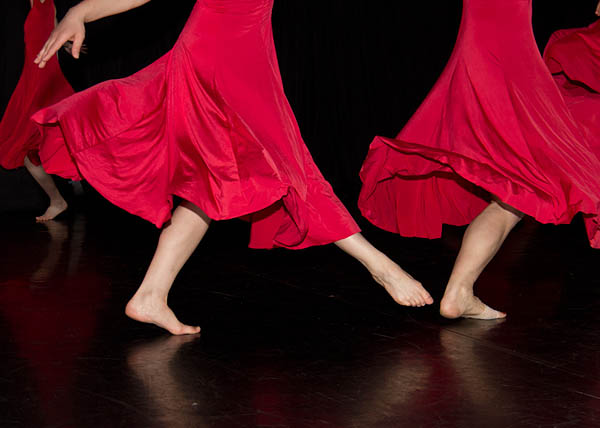