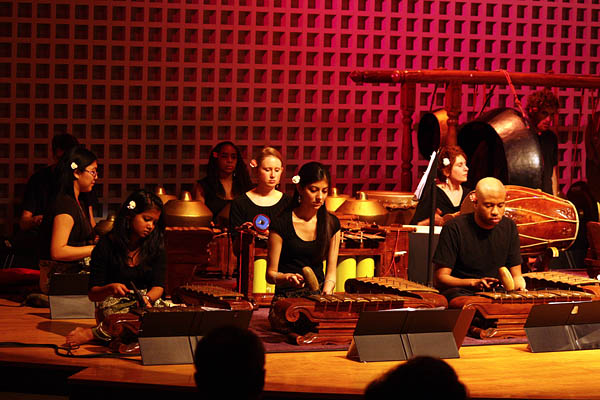 The Bates Gamelan Orchestra in a March 2011 performance.

A piece by American composer Lou Harrison and music from central and west Java, in Indonesia, are on the program for a Bates College Gamelan Orchestra concert at 8 p.m. Thursday, Dec. 8, in the College Chapel, 275 College St.

The concert is open to the public at no cost. For more information, please contact 207-786-6135 or olinarts@bates.edu.

The Indonesian word “gamelan” usually refers to a collection of tuned percussion instruments that have been built and tuned to be used together.

Joining the ensemble are two members of the Bates music faculty: Alice Swanson Esty Professor of Music William Matthews, who will play flute, and violist Robert Dan of the applied music faculty. Here’s the program:

With Matthews’ flute taking the place of a vocal part, “Ladrang Wilujeng (pelog pathet barang)” is a popular piece often performed to welcome guests at weddings and other special events, and also to bring good luck.

Featuring violist Dan, “Threnody for Carlos Chavez (pelog degung)” is the Lou Harrison composition. Harrison, who died in 2003, was a staunch defender of musical multiculturalism and a composer gifted at combining different musical elements to create elegant pieces with great audience appeal. Written in 1978, this is one of the earliest of a number of his works that juxtapose Western solo instruments with gamelan accompaniment.

“Gonjing Miring,” a West Javanese piece, is an upbeat work often used to accompany performances of traditional dance and puppetry. One of the Bates Gamelan Orchestra’s favorite pieces, it emphasizes the use of “interlocking” to create a single composite melody: Two xylophone-like instruments take turns playing every other note of the fast-moving melody.

The orchestra, composed of Bates students, faculty and members of the community, uses two gamelan sets. “Gamelan Mawar Mekar” (“Blossom of Inspiration”), acquired by the college in 2001, is composed of iron and brass instruments and was made in Central Java in 1997.

Called a “gamelan degung,” the other set is a smaller, bronze chamber ensemble from West Java. It was donated to the college in 2007.