In a case of turnabout, museum director shows his own art in Chicago

"Pacific Lands" (2012), an acrylic painting on a printed map mounted on board by Dan Mills.

When Dan Mills talks with artists about showing their work at the Bates College Museum of Art, of which he is the director, he has more insight into their concerns than do some of his peers.

That’s because Mills is a working artist himself. He makes work that employs a variety of media to explore themes and imagery that encompass cartography, humor, imperialism, cartoon characters, landscape and portraiture.

On July 13, Chicago’s Zolla/Lieberman Gallery opened exhibitions by Mills and two other artists, Wilder Buck and Glenn Wexler. The gallery, established in 1976, shows a diverse selection of contemporary artwork.

A week later, at the Chicago Cultural Center’s Michigan Avenue Galleries, Mills is showing his U.S. Future States, a “world atlas” composed of supposed U.S. annexations of various nations — in short, a parody of U.S. imperialism. The opening is at 5:30 p.m. on the 20th, and Mills gives a gallery talk the following day at 1 p.m. The show runs through Sept. 23.

The Perceval Press, actor Viggo Mortensen’s publishing company, produced a hardcover book based on US Future State Atlas series of drawings in 2009.

Mills’ Zolla/Lieberman exhibition, titled Quest, continues the artist’s interest in maps as deliberately constructed art forms that depict a geography as much subjective and psychological as physical and national. Like such other Mills projects as The US Future States Atlas and the Embassy series, the Quest paintings are “characterized by a keen sense of irony and a witty insouciance toward the desires that fuel colonialism and imperialism,” writes Eleanor Heartney in her exhibition catalog essay, “Will to Power.”

“But at the same time, Mills never neglects the visual aspects of his work. His projects straddle the worlds of politics and art, and in the end occupy a region that partakes as much of Matisse as of 18th-century political satirists like James Gillray and William Hogarth. His works appeal to the mind and to the eye, making us smile in order to make us think.”

The Zolla/Lieberman exhibitions continue through Aug. 25. Zolla/Lieberman represents Mills.  Director of the Bates museum since 2010, Mills and his wife, artist Gail Skudera, lived in Chicago and were active in the Windy City’s art community from 1981 to 1994. 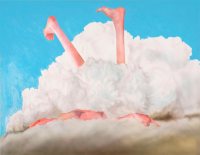 A couple for 42 years, artists open their first duo exhibition at Bates