The Boston Globe Magazine features a story by journalist Jon Marcus ’82 about his uncle, Arthur Marcus, who from the 1950s to the 1970s was one of the best at his job: providing timely sports results, especially results from Suffolk Downs, to various illegal gambling operations in the Boston area, all the while eluding authorities determined to catch him in the act. 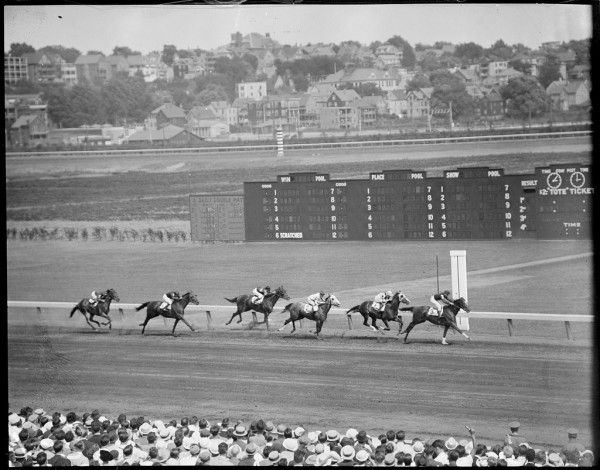 Bookies and other gamblers used to depend on skilled “line men,” like Uncle Arthur, for timely sports results, including race results from Suffolk Downs in East Boston, shown here in the 1930s. Photograph courtesy of the Boston Public Library, Leslie Jones Collection.

“Uncle Arthur ‘dry-cleaned’ himself every day,” writes Marcus. “He moved his operations around the city, right under the noses of the people watching him…. He took bets on water soluble paper that could be dissolved instantly. He led buzz-cut Joe Fridays the right way down one-way streets in his midnight-blue 1967 Lincoln Continental, then spun around to the wrong way, knowing that the G-men wouldn’t follow.”