By Victoria Stanton. Published on February 25, 2013

In an interview with his hometown newspaper, the Lowell Sun in Massachusetts, Drew Gallagher ’11 discusses his recent teaching awards and educational disparity in the nation’s capital. 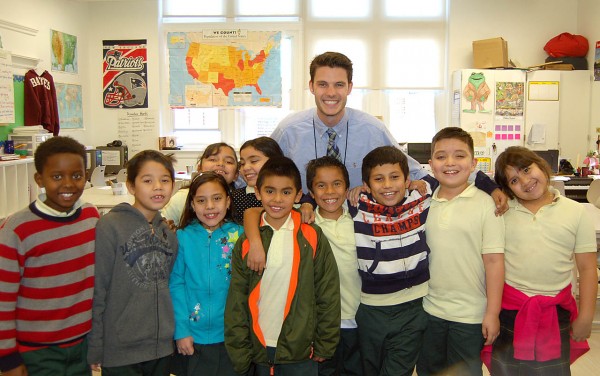 Gallagher tells reporter Katie Lannan that public school teaching in Washington, D.C., is “incredibly, incredibly” challenging. “You’re not just bringing kids into the classroom and teaching them math or reading or how to write an essay. You’re helping them develop social skills that some have lacked or just haven’t been able to develop…. The hardest part of teaching in an inner city is the range in academic levels. I teach 44 kids currently, and their academic levels go from reading at a kindergarten level to reading at a fifth-grade level.”

Entering the teaching profession through Teach for America, Gallagher was one of nearly 600 new first-year teachers in the Washington public schools in fall 2011. That year, Bates was ranked 17th in the country for number of Teach for America participants.

He won the New Teacher of the Year award in 2012 and the Rubenstein Award for Highly Effective Educators, an honor he shares with just 27 other teachers in the district. The award comes with a $5,000 cash prize.

Despite the limited resources at his school, he believes his students are “incredibly talented kids who all have the ability to rise.”

As a Teach for America recruit, Gallagher made Washington, D.C., his top choice precisely because it is one of the lowest performing urban districts in the country.

He says it’s “completely ridiculous” for any school in the nation’s capital to under-perform “when change is being made here every day.”

Duties, lessons and opportunities at 60