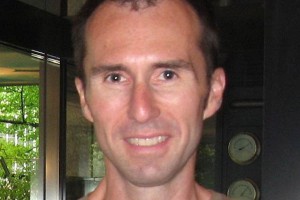 Not widely known in the U.S. nowadays, Blasco Ibáñez was famous internationally in the 1920s, and Hollywood adapted several of his novels. Held July 3-5, the conference at the Universidad Internacional Menéndez Pelayo, in Valencia, looked specifically at the author’s influence on cinema.

George looked at the author’s influence on Japanese film, not American. He discussed his rediscovery of two 1924 films adapted from the fiction of Blasco Ibáñez: Osumi to haha (“Osumi and her mother”), based on the story “The Old Woman of the Cinema,” and Wakasa yo saraba (“Farewell, youth!”), from the novel Woman Triumphant.

“At the summit of his international fame, Blasco Ibáñez was received as a real celebrity” in Japan during a 1923-24 visit, writes George. That buzz helped inspire a rash of translations of his work and, later in 1924, the film productions.

During his short visit, Blasco Ibáñez was surprised to find his picture alongside that of the movie star Rudolph Valentino by the door of a Kyoto cinema showing Blood and Sand, one of the Hollywood adaptations of his work.