Scenes from opera by Carpenter ’94, based on ‘The Age of Innocence,’ performed Nov. 17 in NYC 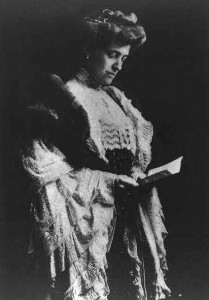 Edith Wharton in an undated photograph. (Library of Congress Prints and Photographs Division)

Not many people are able to share the lessons from creating an opera.

It’s not that they’re unwilling, it’s that only about a dozen new operas are debuted in any given year.

David Carpenter ’94 is one of the few, and scenes from his opera, based on Edith Wharton’s The Age of Innocence, will be performed at Christ and St. Stephen’s Church in Manhattan on Nov. 17 at 3 p.m.

In an essay published at the American Composers Forum, Carpenter offers a few takeaways from writing the libretto and composing the music to his opera.

Carpenter’s music has been performed throughout the U.S., including concerts at the Aspen Music Festival and School, the Oregon Bach Festival, the Brevard Music Center, and the International Double Reed Society at the University of Oklahoma.

He held a residency at The MacDowell Colony in Peterborough, N.H., to work on the opera. He earned a D.M.A. in composition from the Boyer College of Music, Temple University.