In Bates talk, anthropologist Lynch ’89 to share lessons from a factory’s reliance on elderly workers 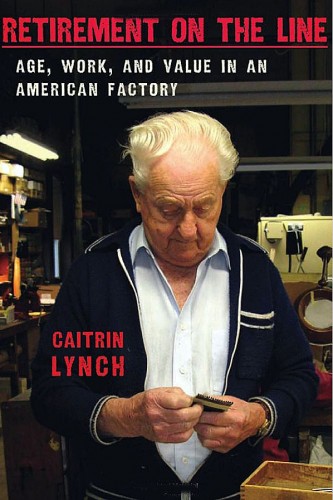 Caitrin Lynch ’89, author of a book studying a Massachusetts factory whose workers are a median age of 74, gives a talk based on her research at 4:15 p.m. Monday, Jan. 13, in Room G21 of Pettengill Hall, 4 Andrews Road (Alumni Walk).

Lynch’s talk is titled Flexibility and Family: Older Workers and Questions of Exploitation in an American Factory. Sponsored by the anthropology department, the event is open to the public at no cost. For more information, please call 207-786-8295.

Lynch, who was an anthropology major at Bates, is the author of Retirement on the Line: Age, Work and Value in an American Factory (Cornell University Press, 2012). The book’s research setting is the Vita Needle Company of Needham, Mass.

A family-owned factory founded in 1932, Vita makes needles, stainless steel tubing and pipes, and custom fabricated parts. As part of its unusual business model, the company seeks out workers older than the traditional retirement age. One worker, the company’s oldest at the time, retired at age 100.

The production workers are all part-time and none receive medical or retirement benefits — the employer banks on their eligibility for Medicare and Social Security benefits. The employer claims to be providing a social service to people otherwise unlikely to find paid work, and he admits to the financial savvy of the model.

In her Bates presentation, Lynch will examine everyday workplace dynamics around notions of flexibility and family, and how they create an atmosphere where workers and employers alike appear to agree on the mutual benefit of a labor arrangement we may otherwise assume to be exploitative.

Lynch investigated what Vita’s commitment to an elderly workforce means for the employer, the workers and the community, as well as society more generally. In an era when people live longer and want (or need) to work into old age, Retirement on the Line provides inspiration and important lessons about the value of older workers.

Lynch, an associate professor of anthropology at Olin College, told The Boston Globe in 2012 that for many Americans getting old is like a vanishing act. “People don’t even look at them, and if they do look at them, they look at them with pity,” she said.

Benefiting from nearly five years of fieldwork at Vita, Lynch developed an intimate portrait of the people who work there, a nuanced explanation of the company’s hiring practices and a cogent analysis of how the workers’ experiences can inform our understanding of aging and work in the 21st century.

Vita’s mostly white male workers exemplify a range of personalities and class backgrounds and a diversity of reasons for working, Lynch says.

“Even those who come out of financial need also seek social engagement and purpose,” she says. “Indeed, Vita workers often invoke the health risks of idle retirement and claim that ‘working here keeps me alive.’ ”

“In today’s United States, when people live longer and need or want to work past the traditional retirement age, the Vita Needle Company challenges us to think carefully about the relationships between a company’s bottom line and the needs and wants of workers.”