Attending an international ocean science conference last month, Professor of Chemistry Rachel Narehood Austin emailed us to say she was “stunned” by what she was seeing.

No, the source of great wonder wasn’t her surroundings (the conference was held in Hawaii) but, as she wrote, “the impact that Bates alumni are having at this meeting.”

Held at the end of February, the Ocean Sciences Meeting is the world’s largest gathering of ocean scientists, engineers, students, educators, policy makers and other stakeholders.

Against the backdrop of global climate change, the meeting is an especially critical venue for scientific exchange among the world’s leading scientific minds.

And what’s it take to be an ocean scientist? You have to be intrepid, says Austin.

For example, Austin said, the alumni who presented at the Ocean Science Meeting either took Bates science courses focusing on chemical reactivity in the environment (particularly the ocean), or they did extensive work in the college’s state-of-the-art Environmental Geochemistry Laboratory, a collaborative teaching and research facility in Carnegie Science Hall.

In the end, Austin says, alumni researchers in almost any discipline are “flourishing in a world that really blurs disciplinary boundaries every day, and we encourage them to do that.”

Bates alumni at the meeting were:

At Harvard, David Johnston’s lab looks at how biology shaped the world billions of years ago, before the rise of atmospheric oxygen. 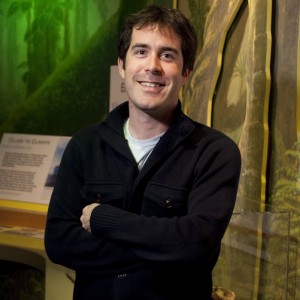 David Johnston ’02 is an associate professor at Harvard, where his lab looks at how biology shaped the world billions of years ago, before the rise of atmospheric oxygen.

While his team can’t (yet) travel back in time to examine the Earth’s oxygen-free era, today’s ocean offers a “rich and wonderful” analogue of that ancient world.

Specifically, oceans have what are called “oxygen minimum zones,” certain depths at which oxygen saturation is very low.

By looking at these OMZs, Johnston’s team can test their ideas about ancient Earth and, at the same time, shed light on the behavior of these systems today.

“While many approaches to understanding OMZs rely on shipboard experiments or other indirect techniques, we have developed an in situ, or direct, way to estimate what’s happening in the OMZs.”

Using isotopes of oxygen and sulfur, they’re learning more about the nitrogen and sulfur cycles within OMZs. These cycles have a direct effect on various ecosystems.

At Bates, says Johnston, a combination of “coursework and research experiences fostered a unique perspective on how to approach a scientific problem,” he says, “while also instilling the intellectual nimbleness that is required of interdisciplinary work. This combination has really paid dividends.”

(Johnston’s path through Bates also included a nod to the social sciences. His senior thesis used the writings of the early 20th-century scientist and environmentalist Aldo Leopold to analyze the question of reintroducing wolves to the Adirondack Park in New York state.)

Erin Bertrand co-chaired a session on vitamin micronutrients and their impact on marine microbes.

She also presented findings from an experiment conducted in Antarctica’s Ross Sea in 2013, in which researchers looked at how changes in water temperature, carbon dioxide and iron availability affect phytoplankton. 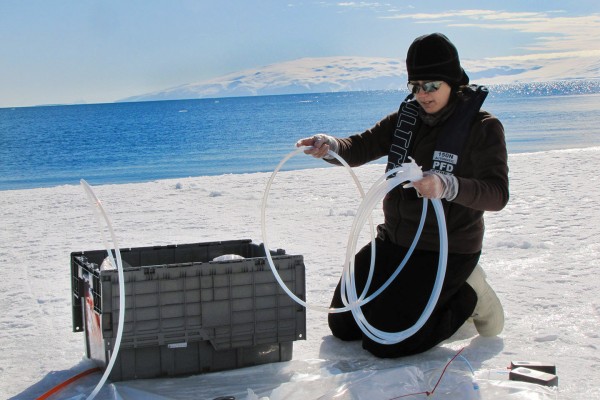 Kneeling on sea ice in the Ross Sea, Erin Bertrand ’05 prepares to take a 1,000-liter sample of seawater as part of a 2013 study of whether the phytoplankton and bacteria in the seawater are starved for iron. (Photo by Jeff McQuaid)

Phytoplankton carry out photosynthesis, and iron, as a trace element, is necessary for this process, explains Bertrand. “This experiment will help us predict how climate change is going to impact the amount of photosynthesis happening in the Southern Ocean,” she says.

“This is particularly important because the Southern Ocean plays a large role in determining the relationship between the world’s oceans and atmospheric CO2 concentrations,” she adds. “Change in Antarctic phytoplankton growth in response to a warming ocean has the potential to profoundly influence that relationship.”

When she starts her position at Dalhousie, Bertrand will be nominated for a Canadian Research Chair, a $300 million Canadian program to attract and retain the world’s most accomplished and promising minds.

At the Ocean Sciences meeting, Kelton McMahon organized and co-chaired a major session on “compound-specific stable isotope analysis,” or CSIA.

In terms of understanding ecosystems, this powerful, relatively new tool can analyze an organism’s isotopic “fingerprint,” which in turn tells about its life and times, its place in the food web and where it’s been. 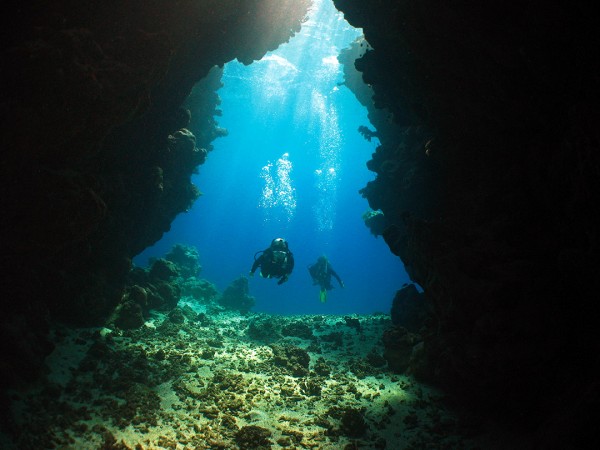 McMahon’s research has looked at long-term isotope data from deep-sea corals in the North Pacific Ocean that have lived “an incredibly long time, over 2,000 years.”

He says that since the end of the Little Ice Age around 1850, there appears to have been a “fundamental shift” in the ecosystem’s biogeochemistry. Like so much of what affects the environment on a large scale, the reason for the shift might relate to something very small, in this case, microscopic organisms known as phytoplankton. 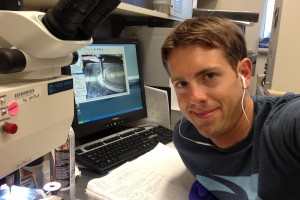 “Our results provide an unprecedented historical context for the dramatic recent changes in Pacific Ocean biogeochemistry,” he says.

The findings, he adds, could also change how scientists think about the North Pacific subtropical “gyre,” or ocean current movement. Because these currents are a “critical regulator of global CO2 and biogeochemical balance,” any change in phytoplankton communities could alter that critical function. 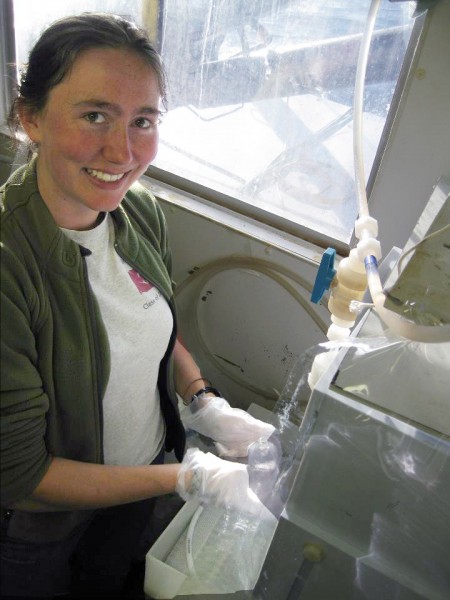 Claire Parker ’11 is doing research that’s part of the Geotraces project, an international effort to measure the concentrations of trace metals in the world’s oceans.

Claire Parker gave what Austin called a “wonderful talk” on three metals — scandium, yttrium and lanthanum — and their distributions in the ocean. Her thesis adviser, Ken Bruland, is an expert in the interaction of trace metals with biotic (living) and abiotic (nonliving) aquatic ecosystems.

Parker’s work is part of the Geotraces project, an international effort to measure the concentrations of trace metals throughout the world ocean in order to better understand key biological, chemical, and physical processes.

Parker enjoys her work because there’s no limit to where the study of trace metals might take her.

“Studying trace metals is surprisingly applicable to almost everything else in the ocean.”

For example, some metals are necessary nutrients for plants, and plants are at the base of the ocean food chain.

Some pollutants can be tracked with trace metals. And undersea hydrothermal vents release “huge concentrations of many metals in a plume that can be detected a thousand miles away.” 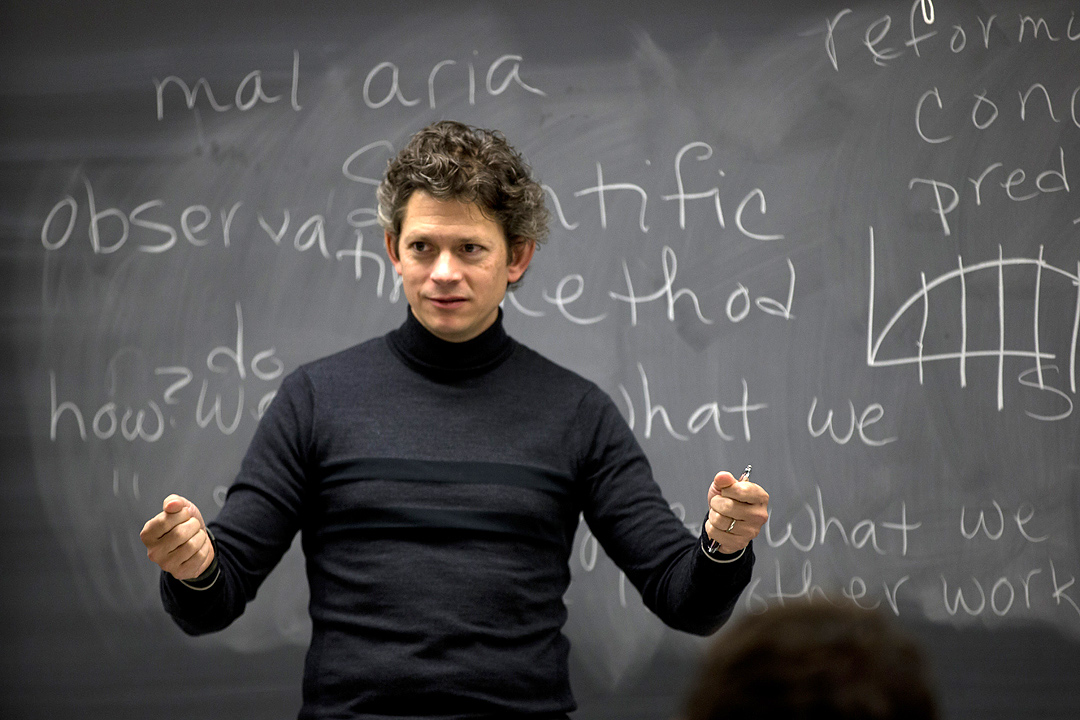 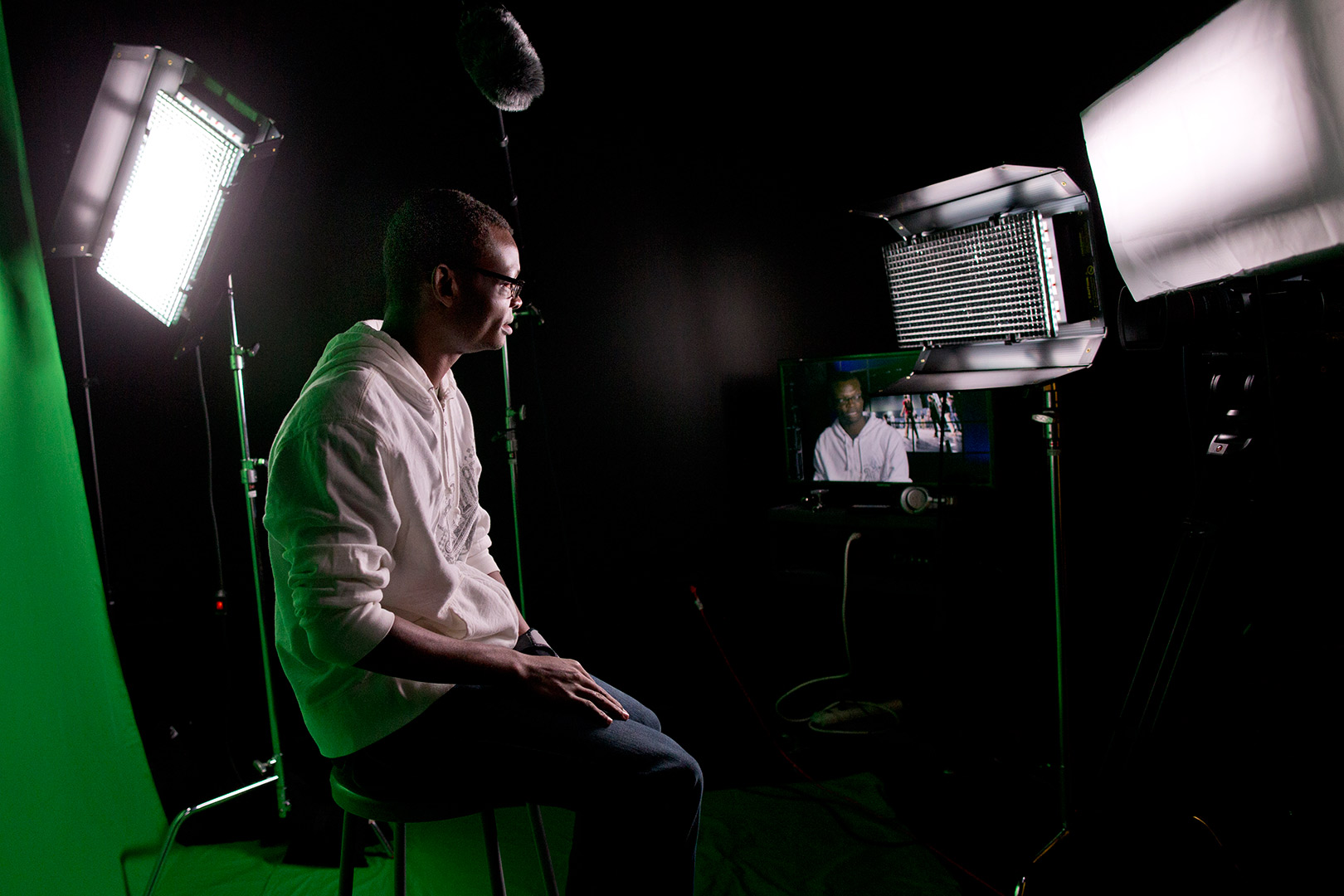