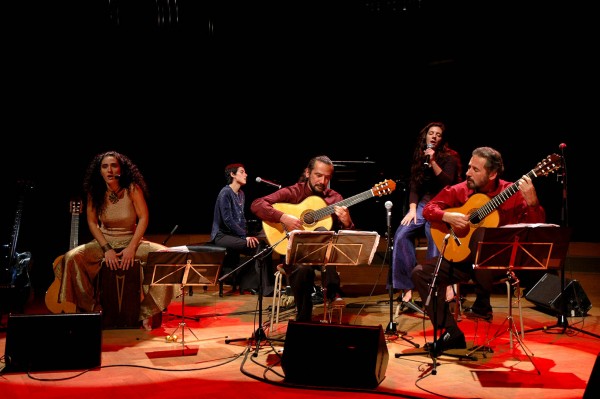 The Assad Family in performance.

Tickets for this Olin Arts Alive concert cost $22, available at batestickets.com. Limited free tickets are available for students and seniors (65-plus) at bit.ly/oacbates. For more information, please contact 207-786-6163 or olinarts@bates.edu.

The Assad Family’s nucleus is guitarists Sérgio and Odair Assad. Renowned as the Assad Brothers, they play original compositions, classical, jazz and diverse musics of Latin America and their native Brazil. Their sister Badi Assad, renowned as a singer and instrumentalist; Sérgio’s daughter Clarice Assad, a composer and singer; and Odair’s daughter Carolina Assad, a singer, join them to form the Assad Family, performing Brazilian folk and pop. 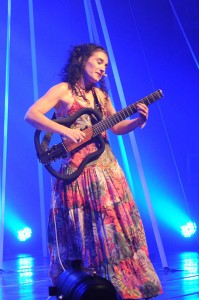 The brothers have set new standards of guitar innovation, ingenuity and expression. Their exceptional artistry and uncanny ensemble playing stem from both a family rich in Brazilian musical tradition and their studies with the guitar-lutenist Monina Távora, a disciple of Andrés Segovia.

Their duo repertoire includes music composed by Sérgio and his reworkings of folk and jazz music as well as Latin music of many styles. Their classical repertoire includes transcriptions of the great Baroque keyboard literature of Bach, Rameau and Scarlatti, and adaptations of works by figures as diverse as Gershwin, Ginastera and Debussy.

In October 2012, Sérgio and Odair premiered a performance of a new concerto written for them by Clarice, at the Pro-Musica Chamber Orchestra in Columbus, Ohio.

In 2004, the Assad Brothers and their daughters, Sergio’s son Rodrigo, Badi and their parents, Jorge and Angelina, toured North America as the Assad Family. In 2008, the brothers performed on Yo-Yo Ma’s chart-topping release Songs of Joy and Peace  (Sony Classical), which features such other guests as James Taylor and Dave Brubeck.

The recording features Sérgio’s composition “Família,” with Angelina, Badi, Clarice, Rodrigo and Carolina among the performers. The CD topped both the classical and the mainstream Billboard charts and won a Grammy for Best Classical Crossover. 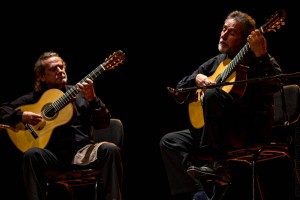 “There was never any doubt that the music would be world-class in the Assad Family concert,” the Los Angeles Times stated in a review of the 2004 Assad Family.

“The flow of talent did not diminish with this third generation, each of whom displayed impressive potential: Clarice Assad’s mobile voice and compositional skills and Carolina Assad’s warm-toned vocalizing … The best aspect of the program was its remarkable sense of creative intimacy, of talented generations enjoying the rare opportunity to make music together.”

In 2011, the present Assad Family lineup took shape. Their 2014 program includes their newest suite, “Da Volta As Raises” (“Back to Our Roots”).

Badi is known as a fearless barrier-breaker and experimenter. She transcends traditional styles of her native Brazilian music with a mixture of pop, jazz and folk sounds from around the world. An extraordinary singer, guitarist and percussionist, she is forging an exhilarating genre of music that defies categorization.

In 1987, at age 17, she was named “Best Brazilian Guitarist” at the International Villa Lobos Festival. At 18, she recorded her first solo album, and was selected to perform in the play Mulheres de Hollanda, a theatrical collage of songs by Brazilian composer Chico Buarque that ran for more than a year.

Badi has recorded for Chesky Records, whose release of her Rhythms won Guitar Player Magazine’s Readers’ Poll for Best Classical Album; PolyGram; and Deutsche Grammophon, whose 2006 release Wonderland was selected for the BBC’s 100 Best CDs and Amazon.com’s Best 30. 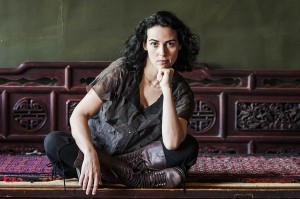 Carolina is a strong vocalist with an innate feel for the rhythms of Brazil. Clarice has performed professionally since age 7. Well-established in the United States as a classically trained composer, pianist and vocalist, she has served this year as the Albany Symphony’s composer-educator partner.

She is curating a major educational project with a local school during her residency and will join the orchestra for a performance of her Concerto for Scat-Singer, Piano and Orchestra in May. Her latest solo recording is Home (Adventure Music), an album of originals and interpretations of Brazilian songs. “[S]he’s a talent quite beyond compare,” an All-Music Guide reviewer wrote in response to the recording.