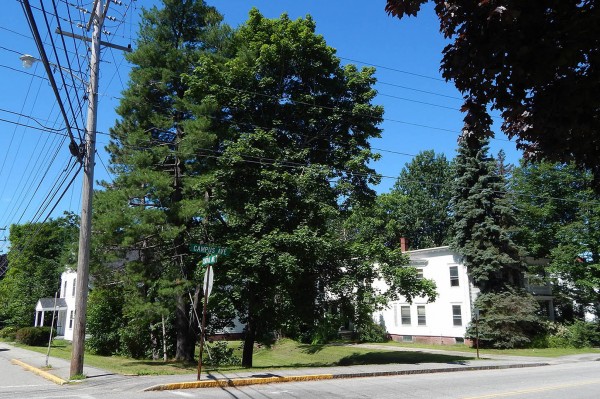 The southwest corner of Central and Campus avenues will see the first impacts of demolition connected with the Campus Avenue Project. (Doug Hubley/Bates College) 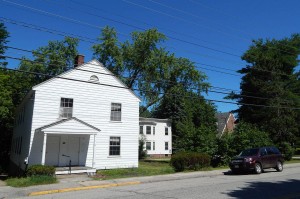 Distorted by a wide-angle lens, this image of the southwest corner of Central and Campus avenues roughly depicts where large-scale work on the Campus Avenue Project will begin. (Doug Hubley/Bates College)

You know what they say about eggs and omelets: You have to break the former to make the latter.

That transformative principle becomes reality on a much larger and noisier scale at the end of July. That’s when extensive demolition begins that will clear the way for the Campus Avenue Project and its two new student residences, which are scheduled to open by autumn 2016.

Note this date: July 28 is the day when a construction fence is expected to rise and buildings, trees and other current features will likely start coming down. The first of three demolition phases will involve the corner of Campus and Central avenues, explains Chris Streifel, who is managing the project for Bates Facility Services. 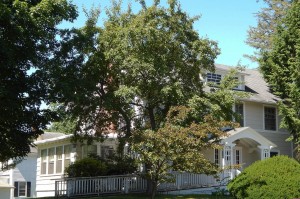 Fated to go away in the second wave of Campus Avenue Project demolition, 53 Campus Ave. has been home to the Career Development Center and the Writing Workshop over the years. (Doug Hubley/Bates College)

Toward mid-August, says Streifel, demo crews will cross Franklin Street and raze several more. The best-known may be the former Intercultural Education building, at 63 Campus (see on the campus map); and 53 Campus, the longtime home of the Bates Writing Workshop and more recently the Career Development Center, now on Wood Street (see 53 Campus Ave. on Google Maps).

In addition, a few wooden houses on the side streets are bound for oblivion, notably 111 Bardwell, home to the environmental studies program until it moved to Hedge Hall in 2011 (see it here). 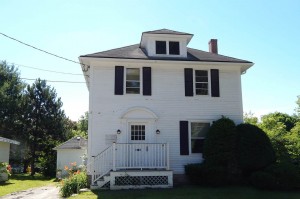 That same phase will see the closure of the Franklin Street parking lot (see it here). Facility Services will announce details about this and other changes to parking in the coming weeks.

The idea is to get as much demolition as possible done by Labor Day and the beginning of school. At that point, the project will enter the mysterious, subterranean yet essential realm of utilities work — which will likely entail occasional closures of Campus Avenue, Bardwell Street and Franklin Street into the autumn.

Of course, construction timetables are slippery things, as Streifel points out. “As with all plans, there’s room for change.” Thanks to such factors as contractor availability, state and local permitting processes, and even the weather, actual demolition may not begin right on the 28th. Similarly, progress over the weeks may ebb and flow as challenges and opportunities present themselves.

And still unsettled is the timing for the removal of the gray house at 45 Campus Ave., which once housed student organizations and still contains telecom infrastructure vital to the operation of the Communications Office, proud sponsor of Campus Construction Update. 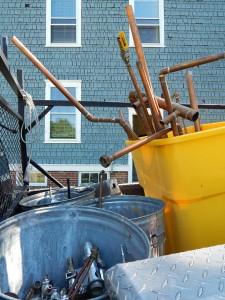 Also undetermined is the identity of the subcontractor that will do the demolition work under the supervision of the project’s overall construction management firm, Consigli Construction. (Based in Portland, Maine, Consigli was the general contractor for the Alumni Walk and new Commons projects back in 2006–08.)

At press (or WordPress) time, the demolition job is out for bid, in a competitive process supervised by Consigli. Price is just one deciding factor, alongside the bidders’ proposed means and methods for executing a project. Bates does have a say in the choice of contractor, but Consigli is “responsible for the conduct and the operation and the success of that contractor,” says Streifel. “So they hold the contract.”

One criterion is how the contractor will dispose of demolition debris. It’s not as straightforward as sending truckloads of wrecked house to the landfill. The resale of waste materials, in fact, provides an important revenue source for companies doing demolition.

“We had five to seven interested parties show up for the bid review,” Streifel explains. “So it’ll be very competitive, and any edge that they can find in reuse or reselling of materials, I expect them to exploit.” 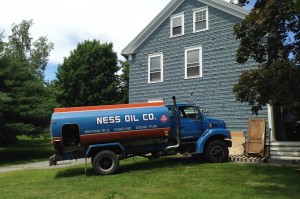 Speaking of salvage, “We’ve gone through and taken everything away from the buildings that has value to the college for reuse,” Streifel says. “Boilers, electrical panels, lighting, doors, door hardware, furniture, security equipment, network equipment, phones, computers, you name it. We’ve pulled everything out that needs to be pulled.”

That includes decorative plantings, as landscape architect Bill Bergevin has been digging up valuable specimens for transplanting around campus.

Finally, if you’d like to look past the metaphorical eggshells of the coming weeks and think instead about the beautiful omelet that is to come (and now we’re done with the egg-and-omelet concept), Streifel points out that the Campus Avenue Project is about halfway through what’s called design development.

Last spring, we were hearing about “schematic design.” In this stage of the design process, project architects at the firm of Ann Beha in Boston established the basics of the student residences — concept, size and shape, the primary materials. Design development will determine specifics of the Campus Avenue Project residences, such as material types, the location of windows and doors, and other details that add up to our experience of a building. 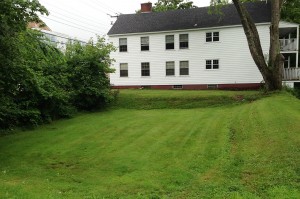 Annually flooded by snowmelt, this cellar hole at Central and Campus avenues was a regular way station for ducks in the early spring. (Duck Hubley/Bates College)

“You go from a few sheets of drawings to hundreds of drawings, from a few pages of specifications to more than a thousand. And you really get into the nitty-gritty of what these buildings are made of, how they’re made — you start fleshing that process out.

“We’re looking at the end of August” to be done with that, “and then we move into the final phase of the design,” which will produce the diagrams that the contractors actually work from, Streifel says. “That goes into January of 2015.”

Can we talk? Campus Construction Update looks forward to your questions and comments (as long as they’re not mean) about campus construction at Bates College. Please take advantage of the comment system below, or write directly to Doug Hubley at dhubley@bates.edu.