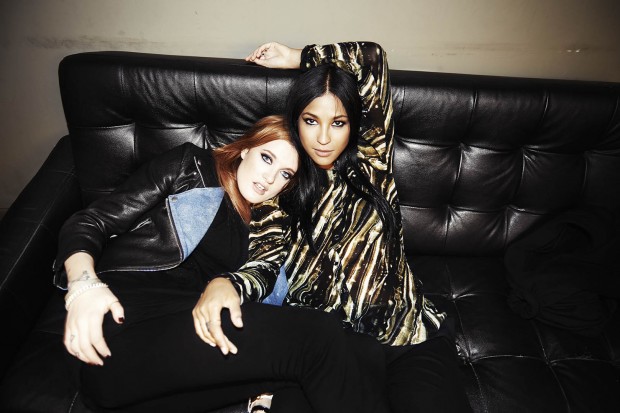 As part of a environmental consciousness-raising tour produced by a Portland firm, the Swedish pop duo known for the smash hit “I Love It” is bound for a Bates performance at 9 p.m. Saturday, Nov. 1, in the Gray Athletic Building, 130 Central Ave.

Icona Pop headlines the musical portion of the 14th annual Campus Consciousness Tour. Opening for Icona Pop are the big-beat electropop quartet Five Knives and the Canadian singer-songwriter Lowell. Doors open for the concert at 8 p.m. Tickets are $25 ($15 for members of the Bates community) and are available at batestickets.com.

The Campus Consciousness Tour also features afternoon programming at Bates around the themes of sustainability and empowering female leadership. Co-sponsoring the event are the Chase Hall Committee and the Bates College Student Government. For more information, please call 207-786-6305.

Formed in 2009, Icona Pop — aka Aino Jawo and Caroline Hjelt — has ridden an infectious blend of electro house, pop and indie rock to the top of the charts. The duo may be best-known for 2012’s “I Love It,” an angsty, must-dance-to juggernaut that broke into the public conscious via Lena Dunham’s HBO series “Girls.”

The song peaked at No. 3 in Billboard’s Mainstream Top 40 ranking, and by the end of 2013 had sold more than 2 million copies. Icona Pop performed “I Love It” on “Good Morning America,” “Today” and “Late Night With Jimmy Fallon.” The song has also turned up on “Glee” and “Dancing With the Stars.”

Half concert tour, half green campaign, Campus Consciousness aims to inspire students in an electric atmosphere while making a positive impact on each community the tour visits. In addition to educating and mobilizing students, the tour is organized to have a minimal environmental footprint.

The CCT is a project of the Portland-based Reverb, an environmental nonprofit dedicated to engaging musicians and their fans to take action toward a more sustainable future. Reverb has worked on more than 150 major tours — e.g., Dave Matthews Band, Maroon 5 and Jack Johnson — and created CCT specifically to reach students where they live.

Elizabeth Lowell Boland, aka Lowell, comes across like dynamite: ferocious and unrelenting. She seeks to empower not only herself but also her listeners, dealing with topics as sexual abuse, rape, abortion and women’s and LGBTQ rights. Yet her brand of pop conveys the urgency of her message via melodies that are accessible and fun.

More About Icona Pop
Icona Pop was officially born in a manner you’d hope two smart Swedish girls would unite: at a dance party under the midnight sun, bonding over heartbreak and breakbeats. Jawo and Hjelt now famously describe the resulting bonding experience as something like “love at first sight.”

Collaborating with such high-caliber producers as Patrick Berger, The Knocks, and Elof Loelv, Jawo and Hjelt have forged a distinctively dramatic sound — at once bright and dark, combining bittersweet lyrics with irresistible rhythms.

Their “Nights Like This” EP was ranked as one of 2011’s most promising debuts by Rolling Stone, Pitchfork and other essential tastemakers, while New York and London club kids instantly paid close attention. And then came “I Love It.”