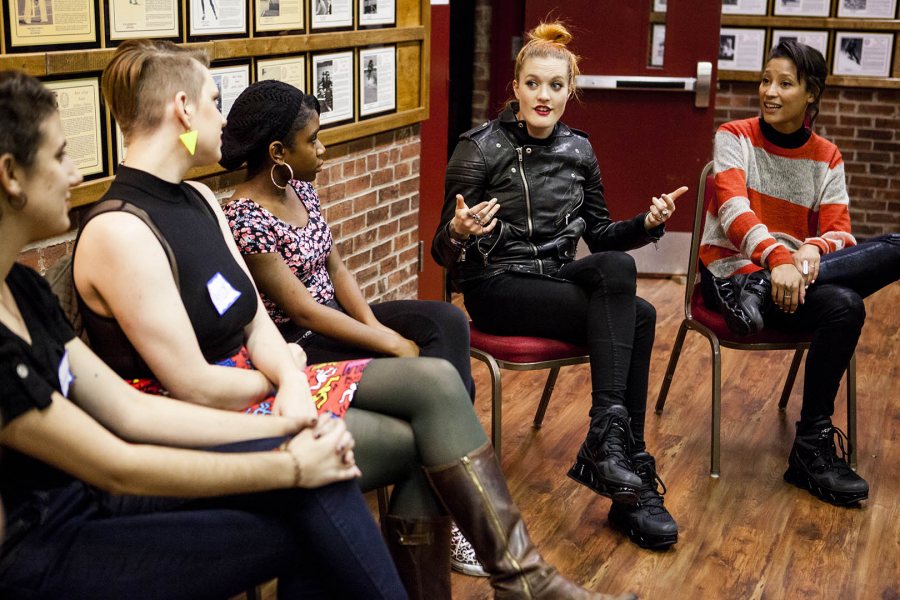 As the DJ duo Icona Pop, they have experienced the double standards and differed expectations that have long affected women in the music industry. So when the pair known for the hit “I Love It” started their U.S. college tour this fall, they sought to connect with female leaders on campus.

Hjelt and Jawo created the “Icona Talk,” a preconcert discussion with students in leadership roles at each of the 10 schools on the Campus Consciousness Tour. The Swedish music stars hoped that through conversation, they and the student leaders would learn from and inspire each other.

The tour came to Bates, its final stop, on Nov. 1. Five students were selected to take part in the Icona Talk on the strength of short essays explaining their leadership roles and interests. Each woman was awarded $100 and the opportunity to bring two guests to the talk and the concert that followed.

At 8 p.m. on that Saturday, 16 Bates students sat in a circle in the lobby of Alumni Gym for the talk. Once Hjelt and Jawo arrived, each student leader briefly talked about her work. 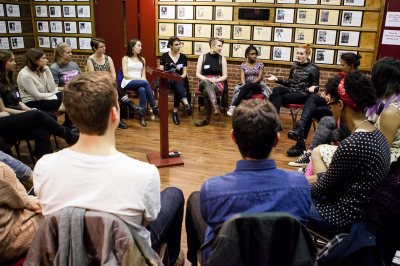 Annakay Wright ’17 of Brooklyn, N.Y., described supporting first-year students as a junior adviser, as well as her contributions as a leader in the performance group Sankofa and as a mentor for students struggling with their sexuality.

Allen Kendunga ’18 spoke about her passion for empowering women to express themselves. She compared her opportunity to have her voice heard at Bates to her home, in Kigali, Rwanda. “Where I come from, you are not allowed to speak in public at all. So now that I have this opportunity to speak, and to express my ideas, I just want everyone to feel the same way.”

For Claire Brown ’17 of Rockville Centre, N.Y., the focus is the environment and law. As a Bates EcoRep, Brown engages the campus in sustainability issues — a second focus of the Campus Consciousness Tour — and helps students understand their impact on the environment. Brown, who has undertaken an internship in a Lewiston courtroom, wants to become a lawyer.

Shana Wallace ’15 of Pleasantville, N.Y., manages a large farmer’s market in her home state, experience that has taught her about environmental impact. On campus, as a co-coordinator with the Multifaith Chaplaincy, she has worked to create social change. She stressed the need for women to “take up their own space.”

Taylor Blackburn ’15 highlighted her experience on the debate team, traditionally a male-dominated activity. A nationally recognized debater, this resident of Sonoma, Calif., has worked to bring more women into debate, both as a leader on Bates’ Brooks Quimby Debate Council and in settings outside Bates. She wants to be a screenwriter and improve female representation in film.

The musicians offered encouragement and shared personal stories to validate the students’ efforts. “We hear this, and it gives us so much inspiration,” Jawo said.

She also spoke to the uncertainty that many students feel about pursuing their passions after college. “Once you find your passion, just do it 100 percent. If it doesn’t work out, then you at least tried, and then you can change direction.” 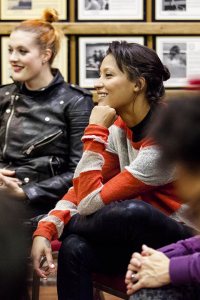 Starting out as Icona Pop was a challenge, Hjelt added. “Everyone told us how the music industry worked. And we were like, Yeah, we know, we’ve heard all the stories, we’ve heard how it’s supposed to be.

“But that’s the biggest challenge: to not accept it. That’s what you all are doing now. You’re not accepting it.”

For Wallace, the encounter had the intended effect. “It’s incredibly important to see prominent artists supporting and empowering young women,” she said later.

“Society as a whole and many industries are not encouraging of young women, and misogyny is internalized to the point where even women are taught to discourage the efforts of other women. So this kind of powerful representation matters.”

Wallace added, “Caroline and Aino were accessible, kind and encouraging, and I loved speaking with them.”