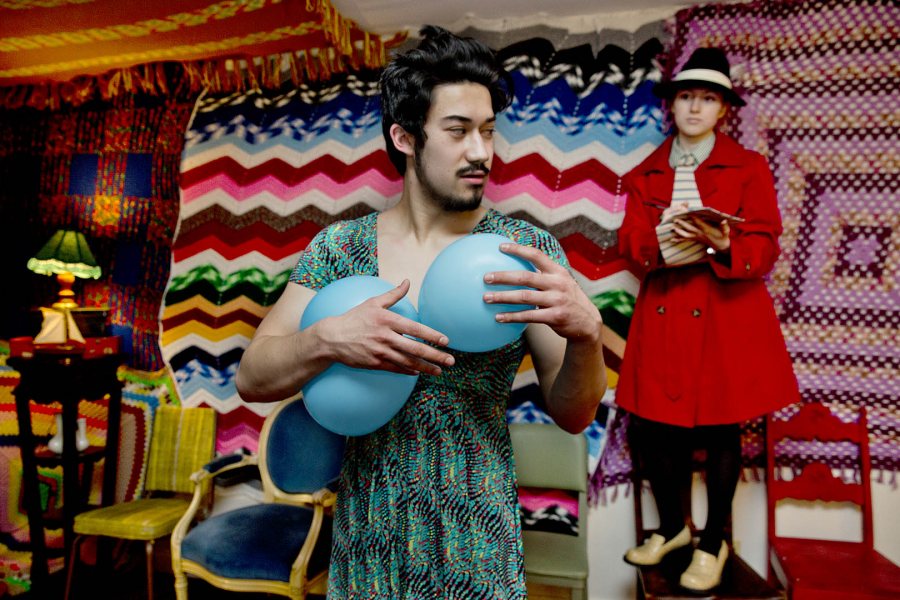 Dan Peeples ’17 of Pierpont, New York, portrays the husband in the Bates production of “The Breasts of Tiresias,” directed by Nick Auer ’15. (Phyllis Graber Jensen/Bates College)

Guillaume Apollinaire’s surrealist play The Breasts of Tiresias, adapted and directed for a senior thesis project by Nick Auer ’15, appears in performances at 7 and 9 p.m. Thursday through Sunday, March 19-22, in a surprise location on campus.

Admission is free but tickets are required, available at http://bit.do/tiresias. Seating is limited. Audience members are asked to meet in the lobby of Chase Hall, 56 Campus Ave. For more information, please call 207-786-6161. 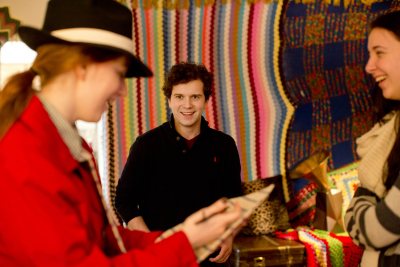 Auer of Fairfield, Connecticut, has overseen the creation of an immersive, broadly sensory experience for Bates audiences.

“I’m excited to both throw the performers out of their comfort zone and throw the audience a little bit into the unknown,” Auer says, “and through that new, exciting venture, the themes and the voice of the playwright will come out in more visceral ways.”

Tiresias tackles heady topics including war, feminism and reproduction. The play follows the main character, Therese, as she decides to transform into a man. Shedding her breasts, Therese breaks free of the bonds of domesticity to become a general and a member of the Senate, roles traditionally reserved for men.

Translated from French and revised over the century, the play is a wink and a nod to the Greek myth of the blind prophet Tiresias, who transforms into a woman.

First performed in 1917, Tiresias was the first surrealist play of its kind. Surrealism explores elements of the seemingly illogical or absurd, and often breaks tradition with conventional narrative in order to touch upon the life of the unconscious. 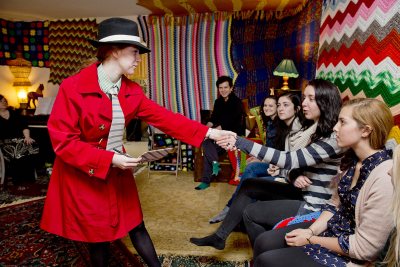 The Bates production of “The Breasts of Tiresias” provides an immersive audience experience. In the red coat is Hope French ’18. (Phyllis Graber Jensen/Bates College)

Auer hopes that his immersive retelling of the play will invite the audience to contribute their own insights. The production allows different parts of the play to be performed simultaneously while the audience travels between rooms. The action will include dance. This all adds up to an engaging, unconventional theatrical experience.

For Auer, bringing out the play’s surrealist qualities has been an exciting artistic and technical challenge. He has worked with theater professor Christine McDowell, who developed the costumes, and with classmate Guen Figueroa of McHenry, Illinois, whose design work for the production entails sets, lighting — and scents, although Auer won’t say more about the olfactory aspect, preferring that people come and have the experience for themselves.

“We’ve wanted to experiment with how we can incorporate all the senses,” Auer says. “Our collaboration has definitely been central to the development of the piece.” Like Auer’s, Figueroa’s work on the play is her senior thesis project in theater.

Auer believes the play resonates with contemporary issues of gender politics. “In the play, the gender binary comes through in terms of: You’re male or you’re female, and there are roles associated with both those genders,” he explains.

“Today, we have expanded our idea of what gender means. So, producing this play in 2015 gives it a contemporary voice by expressing all different sorts of ideas of gender.”

He was drawn to the play by the richness and complexity of Apollinaire’s language, and is interested to see how meaning and historical relevance will come through in a contemporary performance — and in collaboration with each different audience.

“Each performance will be markedly different depending on who is attending it that evening,” he explains. “Their response becomes part of the experience.”