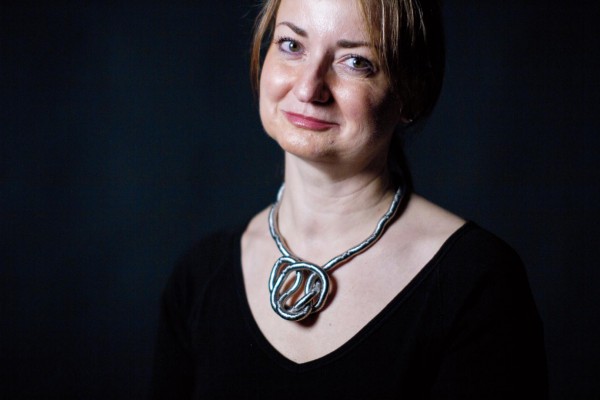 The director is Kati Vecsey, senior lecturer in the Bates theater department. Closer is performed by a rotating cast of 12 students from Vecsey’s Advanced Voice and Speech class. While four students perform, the other eight manage the backstage work, props and lighting.

Premiered in 1997 and perhaps best-known from its 2004 film adaptation, starring Julia Roberts, Jude Law, Clive Owen and Natalie Portman, Closer is set in London and examines human relationships through a raw yet humorous portrayal of a love quadrangle. The play focuses on the complex relationships among four lovers — Dan, Larry, Anna and Alice — as they swap partners over a period of years.

Written during a period in British drama referred to as “in yer face” theater, the play features blunt, explicit language.

As a director, Vecsey says, “I’m interested in the human psyche and personal relationships because that is what life is about. It’s about how we relate to people.”

Vecsey, who is the vocal director for Bates theater department productions, picked the play as an exercise for the voice and speech class because the key to the characters lies in the language. She notes how every character has a one-on-one scene with every other character, thereby revealing personalities in depth.

“Each character has his or her own personal background, own demeanor and disposition, own personal rhythm,” says Lydia O’Brien, a senior from Washington, D.C., who is one of the three actors playing Anna. “These are factors that influence voice in unexpected ways.

“During read-throughs, we’ve talked with Kati a lot about characterization and what our characters reveal about themselves through certain lines, and this comes out even more when we work on our character biographies out of class. We think about how our characters’ personal habits and quirks affect voice.”

Here are the three casts:

An essential part of the learning process for Vecsey’s voice-and-speech students is to narrow in on their characters’ motivations and desires. This begins with a close analysis of the script. Vecsey notes that it’s important that her students approach characterization without passing judgment.

“We always say in theater that acting is reacting,” she says. “So you have to like the character. You have to understand that character’s thoughts and actions. And I think that if you understand that through your own emotions, you will be able to deliver a voice, and express emotions through that voice, that are true.”

O’Brien agrees. “Anna seems to have good values at first, but she goes on to cheat within her relationships and lie about it, as do the others.

Incorporating the lovers’ exchanges online as well as face to face, Closer comments on the advent of contemporary communications technology and how it has transformed our interactions. Vecsey believes that the play represents a specific political and economic moment in English society.

At the same time, though, its themes are universal. “There are moments in the play that probably happened to you,” Vecsey explains. “Like when people lie to each other, or betray each other, and how somebody reacts to that, or how someone reacts to kindness, or being cared for, or being loved or not being loved.