Bates hosts memorial gathering for pianist, artist-in-residence Glazer on May 9 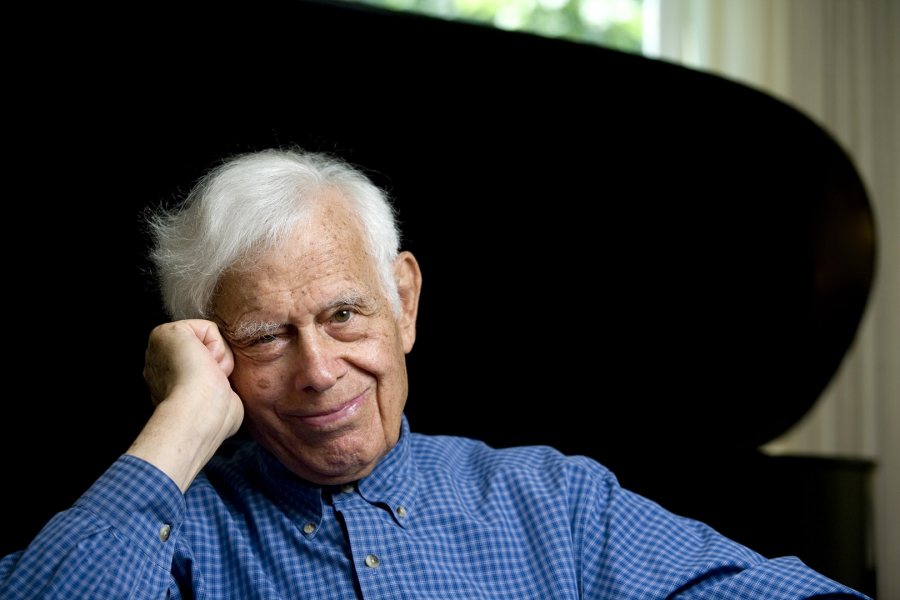 Frank Glazer, the Bates College artist-in-residence and a pianist loved for his artistry and generosity, will be remembered at a gathering at the college at 2 p.m. Saturday, May 9, in the Peter J. Gomes Chapel, 275 College St.

Glazer died in January at the age of 99, just weeks after his final public performances. Combining musical performances and remarks by family, friends and colleagues, the memorial service is open to the public at no cost. A reception follows in the Olin Arts Center, 75 Russell St. 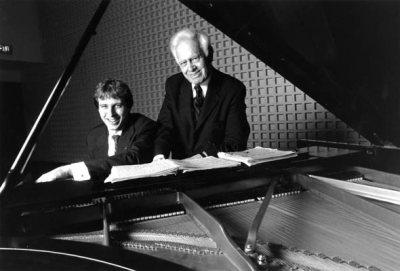 Glazer’s musical vitality and bulletproof technique remained intact up until the end of his life. In 2009-10, he dedicated his Bates performance season to the entire cycle of 32 Beethoven sonatas, learning several that he previously had not played. In autumn 2014, he performed three concerts with three different programs within eight days.

At the time of his passing, he was planning a February concert to mark his 100th birthday.

Born in Wisconsin in 1915, Glazer made his musical talent evident early on, giving his first public performance at the age of 13. In a sense, he was a musical bridge spanning the 19th, 20th and 21st centuries: He studied with Artur Schnabel, a pianist known for his interpretations of the Viennese masters, as well as with Arnold Schoenberg, the modernist composer known for his atonal approach. 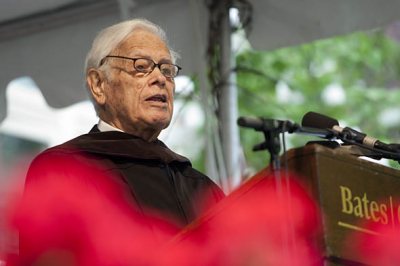 Frank Glazer addresses the Bates Class of 2011 at Commencement. One of three honorary degree recipients, Glazer told the graduates: “If you have faith in your mission, your goal, your dreams, I urge you to remain true to this commitment, which is at the very core of your existence.” He lived those words. (Phyllis Graber Jensen/Bates College)

Glazer made his New York debut in 1936 with a program that he would repeat 70 years later at Bates to mark the anniversary. After his World War II military service, Glazer studied anatomy and piano technology as he developed a piano technique that ultimately allowed him to remain creatively robust throughout his long life.

In the early 1950s, Glazer’s performing career hit its full stride. That career brought him international acclaim and encompassed numerous recordings and premieres of contemporary music; his own television program in the 1950s; and countless solo recitals and performances with orchestras and chamber ensembles, including the Maine-based New England Piano Quartette, of which he was a founder.

He taught at the Eastman School of Music for 15 years before coming to Maine with his beloved wife, Ruth Gevalt Glazer, in 1980. The couple’s projects in Maine included founding the Saco River Festival, in Cornish. Ruth Glazer died in 2006 at the age of 95.

Glazer arrived at Bates at age 65, a time of life when many people are contemplating retirement. Glazer contemplated it, and rejected it. “I’ve worked all my life to get to this point, where I like the sounds I hear,” he said in 2006. “Now is not the time to quit!”

Internationally renowned as a musician, Glazer was also highly esteemed as a teacher and a friend, and he was cherished for his generosity with time, good humor and wisdom. At Bates, he established the Frank and Ruth Glazer Music Scholarship Fund to aid a music student at every year. He also donated his extraordinary collection of scores, recordings and papers to the college’s Ladd Library.

In 2012, he published the book A Philosophy of Artistic Performance (With Some Practical Suggestions), a collection of aphorisms and advice that Glazer had been amassing since the 1930s. His intention was to offer younger musicians a set of tools that would enable them “to find and evolve their own feelings about the art in music, instead of the mechanics of it,” he said.