Convocation speaker to Class of 2019: ‘The source of the magic is you’ 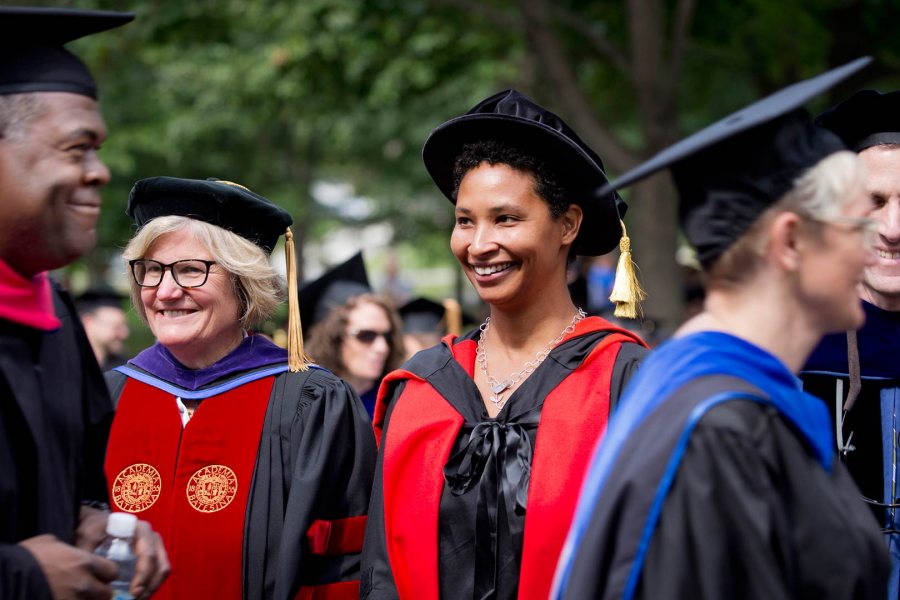 A political philosopher known for the depths of meaning she has uncovered in the Declaration of Independence, Danielle Allen made a couple of audience-specific connections to that foundational text during Bates College’s 2015 Convocation on Sept. 8.

For one, Allen told the incoming Class of 2019 that Bates and its students “are in some sense the direct heirs” of the Declaration. That’s because of the motivating effect the Declaration had on the 19th-century movement to abolish slavery — a movement that engendered, among many other things, Bates College. 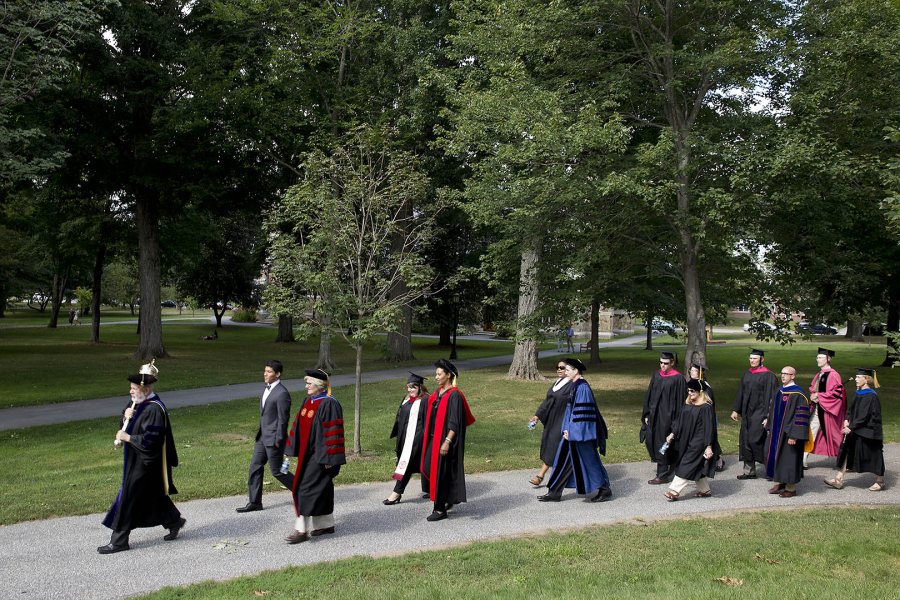 Allen is the author of Our Declaration: A Reading of the Declaration of Independence in Defense of Equality, and the college assigned this remarkable study to the incoming class as the annual Common Reading. Joining Allen for Convocation on the Coram Library porch were college President Clayton Spencer; student government President Norberto Diaz ’16 of Carson, Calif.; and Brittany Longsdorf, who joined the college as multifaith chaplain in June. (Read a Convocation preview, including a brief Danielle Allen biography.)

Allen and Our Declaration provided an effective organizing principle for events around the arrival of the new class and of the new academic year. Two discussions of the book took place Sept. 8, before and after Convocation — a brunch session for first-years, and, during the afternoon, a public session with staff, students, and faculty.

And for her Convocation welcome, President Spencer found concepts in the book that were powerfully useful in setting a tone, for both academy and community, to start the year. The people of Bates, she said, “are a microcosm of precisely the sort of democratic engagement Allen so brilliantly brings to the surface for all of us.

“Allen shows us that the Declaration is an act of ‘co-creation and co-ownership of a shared world,’ grounded in the egalitarian notion that each and every one of us has a role to play in shaping and maintaining a community defined by a set of principles and values that we hammer out together and reshape over time.

“We pride ourselves on the quality of community that defines life on this campus, at least on good days,” Spencer continued. “Allen’s remarkable book teaches us that this community of ours is not something to be taken for granted. Instead, it’s an ever-changing dynamic that is co-created and stewarded by all of us — but, most important, by you, the students.”

More seriously, Allen’s appreciation for the occasion came from her awareness of Bates’ roots in the anti-slavery movement — in her words, it was “a rare privilege” to be here for that reason. She took a few minutes to debunk the notion that because its lead writer, Thomas Jefferson, owned slaves, the Declaration was a hypocritical proclamation.

The Declaration has many voices in it, she explained, and as important as Jefferson’s was that of John Adams, who was opposed to slavery. And in the years following its issuance, the Declaration gave impetus, and sometimes wording, to legislation outlawing slavery in several states.

Allen dedicated most of her address, though, to what she called “the magic of the liberal arts classroom” and its echoes in the Declaration. It was a magic that she first encountered teaching night courses in Chicago for low-income adults, largely black or Latino, who were eager to improve their situations through education.

Teaching the Declaration to these students surprised Allen twice: once because most of them hadn’t read it, seeing no relevance to their lives — and the second time because, unlike the younger and more affluent full-time students she taught by day, her night students quickly grasped what it’s about: agency, the ability to change their circumstances.

They got the Declaration, she said, “because their lives were full of grievances. There were lots of things wrong in the world around them. And the Declaration is fundamentally, at its core, a story about human agency”: people diagnose what’s afflicting them, prescribe remedies, and justify those remedies.

Here is where the Declaration and the liberal arts education overlap, Allen said. Rather than teaching students only what will make them useful to their future bosses, the liberal arts education teaches self-determination, which is the meat of the Declaration. And in curriculum and method, she said, such an education is the best preparation for those three steps toward agency — especially the third, justification.

“Justification is about testing your reasons for doing things with the people around you. And that’s the other remarkable thing about a liberal arts education,” she said: Because of its emphasis on substantive discussion, reasoning and argument, it affords “the opportunity to test the justifications for your choices, because that requires a set of relationships.”

Referring to the empowerment she had witnessed in some of those night students, Allen said, “It’s a beautiful thing, a rare human privilege, to have the chance to see people coming into their full as agents, actors in the world, choosers of their own courses.

“That’s what a teacher gets, what the joy of teaching is fundamentally about. And that’s why the faculty sitting here today . . . have the best job in the world,” she concluded. “Let there be magic in the classrooms for you — but remember, the source of the magic is you.”

Bates Student Government head Diaz, while not neglecting a shout-out to the calzones at Luiggi’s down the street, urged the new class to get involved, both on campus and in the wider community. “Bates is in a time when the student voices can have a great impact,” he said. “I implore you to join, to commit, and to lead.”

“This moment has been kindling inside of you for months, years, maybe even a decade,” Longsdorf, in her first benediction at a Bates Convocation, told the new class. “Ever since you first heard the word ‘college,’ this little spark has been flickering and glowing, spreading through your whole self.”

“May that spark within you become a strong fire of spirit, personality, and wisdom,” she said. “With courage and hope, step forth, knowing that you are wrapped in divine light.”