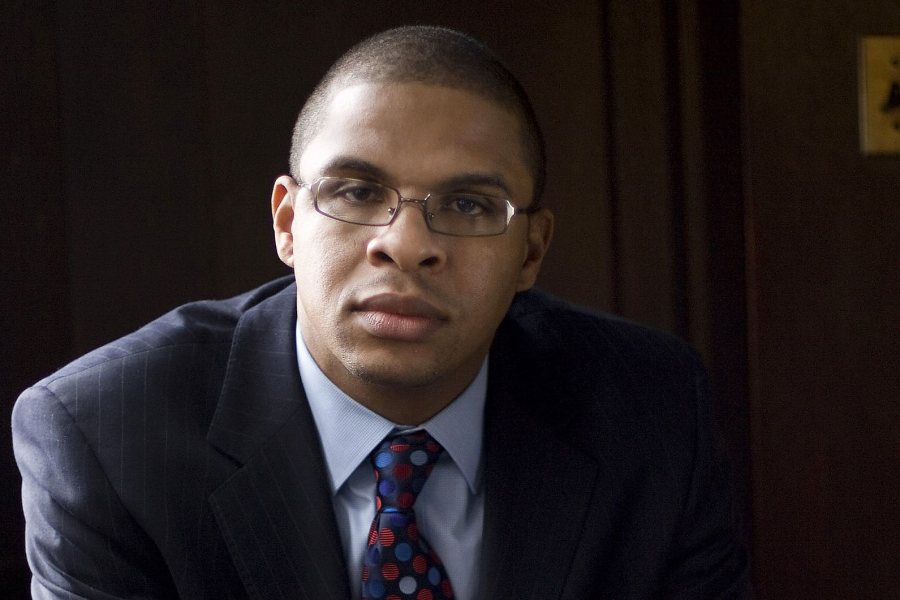 Roland Fryer Jr. is the Henry Lee Professor of Economics at Harvard.

At a time of close and passionate scrutiny directed at relations between police and African Americans, a Harvard economist known for pioneering research into racial inequality gives a talk titled Understanding Racial Differences in Police Use of Force on Nov. 8 in the Olin Arts Center Concert Hall.

The speaker is Roland G. Fryer Jr., Henry Lee Professor of Economics at Harvard and the 2015 recipient of the American Economic Association’s John Bates Clark Medal.

Considered second only to the Nobel Prize in economic science, that honor is awarded annually to an American economist younger than 40 who is judged to have made a significant contribution to the field of economics.

The AEA praised Fryer for being “bold and fearless” in his use of economic theory and new data, lauded his “creative and entrepreneurial edge,” and credited him with producing “the most important work in recent years on combating the racial divide, one of America’s most profound and long-lasting social problems.”

The event is sponsored by the Office of the President, the Office of Intercultural Education, the Dean of the Faculty, and the departments of economics, psychology, and sociology at Bates.

“Valuable to Have More Data”

Bates Associate Professor of Psychology Michael Sargent speaks on value of research being conducted by Roland Fryer on the topic of racial differences in police use of force.

High-profile incidents of police use of force since August 2014 have intensified the national dialogue about race and police work. In his Bates address, Fryer will explore, through data from several cities and counties, whether there are racial differences in police use of force. He’ll discuss the preliminary analysis of the research and factors that may account for any racial differences in varying levels of force.

In a 2011 interview with WBUR-FM, Fryer explained that he seeks to do “whatever it takes to understand root causes of disparity in America. I wake up every day . . . [wanting to] understand, how can we make it such that everyone in America has a shot at the American dream?”

Fryer, whose work has been widely cited by the media outlets and in congressional testimony, combines economic theory, empirical evidence, and randomized experiments to help design more effective government policies. When he was 30, he was the youngest-ever African American to receive tenure at Harvard, and he received a MacArthur Foundation “genius grant” in 2011.

Fryer’s best-known research to date seeks to address racial disparities in student success. Fryer has shown that while black and white children start out with equal potential for succeeding in school, black children overall fall behind over time — and discrimination is less to blame for that disparity than it once was.

Instead, explanations for the racial gap include such social factors as the belief among some black students that studying hard is “acting white.” While this phenomenon was long considered an urban myth, Fryer found that, in fact, it’s true: While white students with good grades tend to have more friends than their lower-scoring peers, good grades mean fewer friends for black students.

Based on a study of 40 charter schools in New York, Fryer went on to propose five areas of emphasis that were accountable for 40 percent of those schools’ success with students — including such steps as increasing students’ time in school and focusing the culture on preparing students for their future.

“He realized the power of economics to study race.”

The teenage Fryer “hung out with a bad crowd,” The Economist wrote in a May 2 profile. “Surrounded by drug dealers and getting into fights, he used to sell counterfeit handbags to make a bit of extra cash. Asked by a friend where he would be at 30, he replied that he would probably be dead.” (In fact, at age 30, Fryer was tenured at Harvard.)

Attending the University of Texas at Arlington on an athletics scholarship, Fryer discovered a passion for scholarship and a voracious appetite for work. He earned an economics degree in two and a half years and moved on to Penn State for a graduate degree. “It was there, early on, that he realized the power of economics to study race,” Stephen J. Dubner wrote in a 2005 New York Times profile.

Fryer is the founding director of the Education Innovation Laboratory (EdLabs), dedicated to providing scientific evidence to support good decisions in education in the United States, particularly those pertaining to minority students and students living in poverty.

Fryer has also worked as the chief equality officer in New York City’s Department of Education. He is a fellow of the American Academy of Arts and Sciences and a recipient of the Calvó-Armengol Prize and the Presidential Early Career Award for Scientists and Engineers.