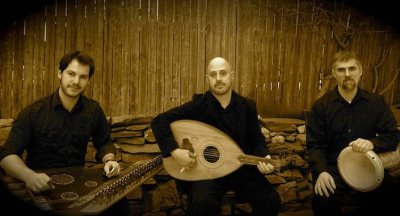 The concert is open to the public at no cost, but tickets are required, available at bit.ly/oacbates. For more information, please contact 207-786-6135 or olinarts@bates.edu.

The Okbari Middle Eastern Ensemble appears as a duo, trio, and a quartet, and has performed at venues throughout New England, the East Coast and the Midwest, including such prestigious venues as the Old Town School of Folk Music in Chicago, Alwan for the Arts in New York City, and the Chicago Arabesque Festival.

As a trio, Okbari is Amos Libby (oud, vocals), Eric LaPerna (percussion), and Duncan Hardy, who plays a microtonal zither called a qanun.