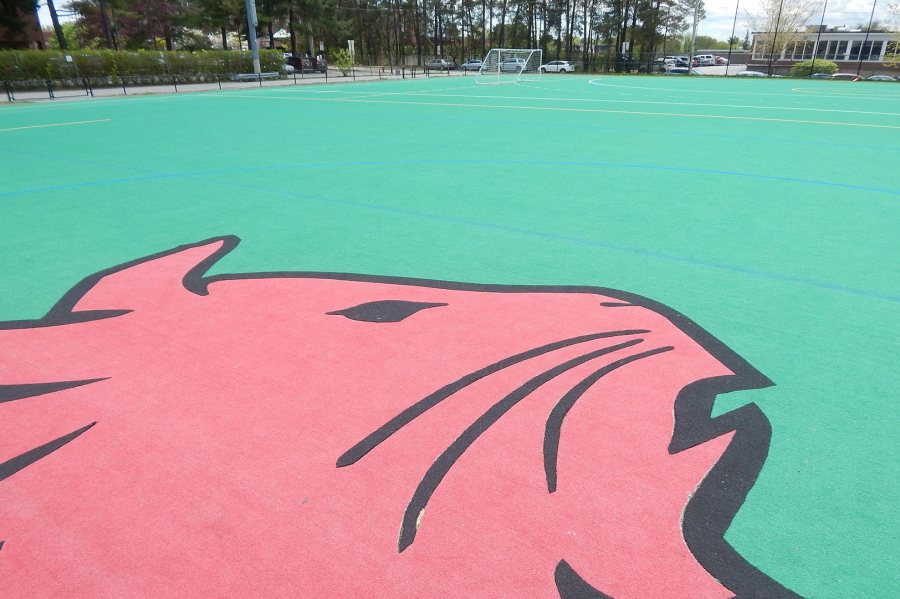 When Campus Construction Update learned that a new watering system was part of this summer’s project to replace the playing surface on Bates’ field hockey facility, our journalistic reflexes started to bark.

Why, they asked, would you irrigate artificial grass?

Well, as it turns out, it’s standard in field hockey to soak the artificial turf for games and practices (in above-freezing temperatures, anyway). The reasons involve both the quality of play and the safety of the players, explains Bates’ field hockey coach Danielle Ryder. 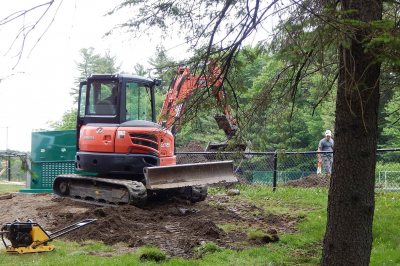 “The water allows the ball to move at greater speeds with a consistent roll,” she says. “It also keeps the ball on the very top layer of the turf carpet, allowing players to easily maneuver their sticks around the ball.”

The water reduces friction and therefore injuries, Ryder adds. “It plays a huge role in player safety. Imagine running full speed and falling across your living room rug. You’d walk away with some pretty bad rug burns, although we call it turf burn.”

The installation of the irrigation system, by the Portland firm Thirsty Turf, began the remake of the Campus Avenue Field in early June. But most of the work happens during July — notably, the removal of the 16-year-old AstroTurf, leveling of the existing gravel substrate, and placement of the new turf, made by the Dutch company GreenFields and called GreenFields TX.

AstroTurf removal begins the week of July 4, and the entire project should be done by Aug. 1. A few chores like the irrigation system are being handled by subcontractors, but the lead contractor is NET Sports Group of Saco, Maine — which, coincidentally, just installed TX at Syracuse University.

New turf is overdue on Campus Avenue Field, Ryder says. Symptoms of wear on the AstroTurf include bald spots, notably in the highly trafficked shooting circle, and seams that are separating. In addition, the so-called e-layer, a shock-absorbing stratum of rubber chips, has become compressed and hard. 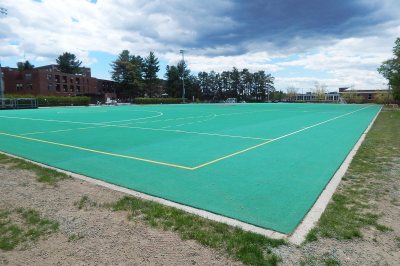 In addition to replacing the 16-year-old AstroTurf surface, this summer’s renovations will entail placing new sod around the perimeter. (Doug Hubley/Bates College)

There are also inconsistencies in the current surface, such as sewn-in markings, that make ball trajectories unpredictable. And the giant Bobcat emblem gets slippery when wet.

“It’s tough because it’s right in the middle of the field,” says a member of the team, Caroline O’Reilly ’18 of Longmeadow, Mass.

Most important, though, technology has marched on, and the GreenFields TX is simply a much better product than the poor old AstroTurf.

The AstroTurf is nylon and the GreenFields is polypropylene, which is softer and therefore safer, explains Henry Gillert, who is managing the turf replacement for Bates Facility Services.

And TX has a better bounce and other playing characteristics — so much so that it was the field surface chosen for the 2014 Hockey World Cup.

Gillert notes that Ryder and the project team interviewed four different manufacturers, including AstroTurf. “There are not a lot of GreenFields installations in the United States, but it seems to be far superior in many aspects, so we feel pretty confident about the decision,” he says.

“It’s really going to be a great field for many years. The industry has changed so much since the AstroTurf installation — and it’s changing as we sit here. That’s how dynamic it is.”

So what about that irrigation system? It will feature eight sprinkler heads around the field, three along each of the long sides and one on each of the short sides. 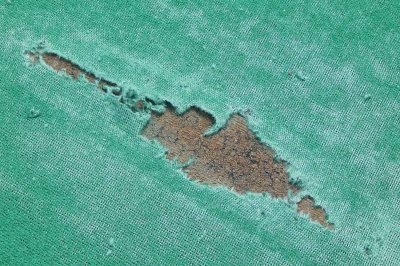 Wearing of the green: A hole in the 16-year-old AstroTurf at Bates’ Campus Avenue Field. (Doug Hubley/Bates College)

Before games and at halftime, after a warning horn, the heads will pop up around the perimeter of the field and let fly. “It’ll provide a uniform coverage of water across the surface of the field,” Gillert says.

“One of the criteria was that the system be able to saturate the field within the 10-minute halftime.”

Each head, says Gillert, will be able to spray a 130-foot jet. And each will pump 350 gallons per minute at a time onto the GreenFields TX. “That’s a lot of water in one minute,” he says.

Previously, Facility Services crews would deploy water cannons to wet the field before a game and again at half-time — a problematic arrangement because the water cannons had neither the volume nor the coverage patterns to drench the whole field.

And the new system, Gillert adds, can be operated with a cellphone app.

Can we talk? Campus Construction Update welcomes queries and comments about current, past, and future construction at Bates. Write to dhubley@bates.edu, putting “Campus Construction” or “Down, you pesky journalistic instincts!” in the subject line. Or use the comments system below. 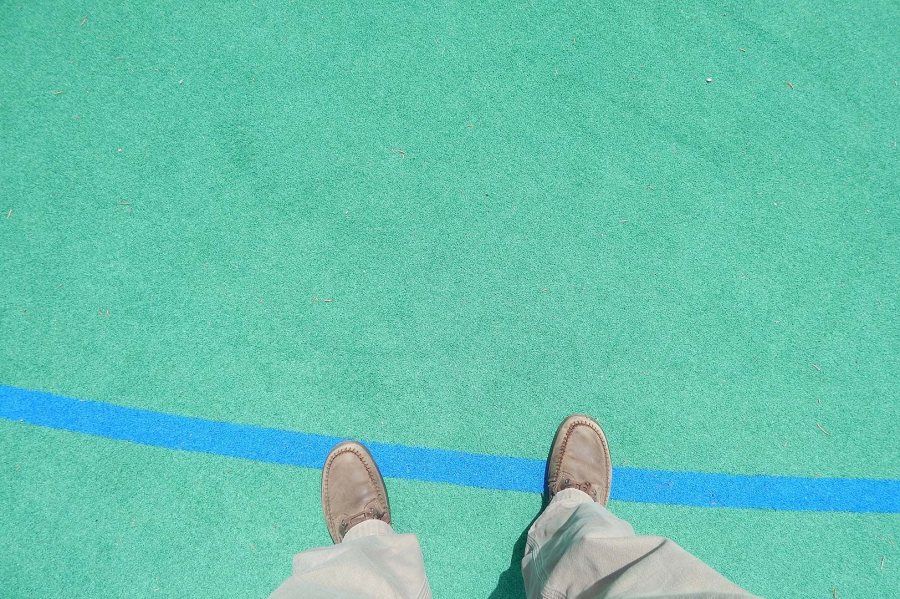 The focus of the 2016 Campus Avenue Field renovation is the replacement of AstroTurf installed in 2000. The Ecco Seawalkers will be around for a while longer, though. (Doug Hubley/Bates College)