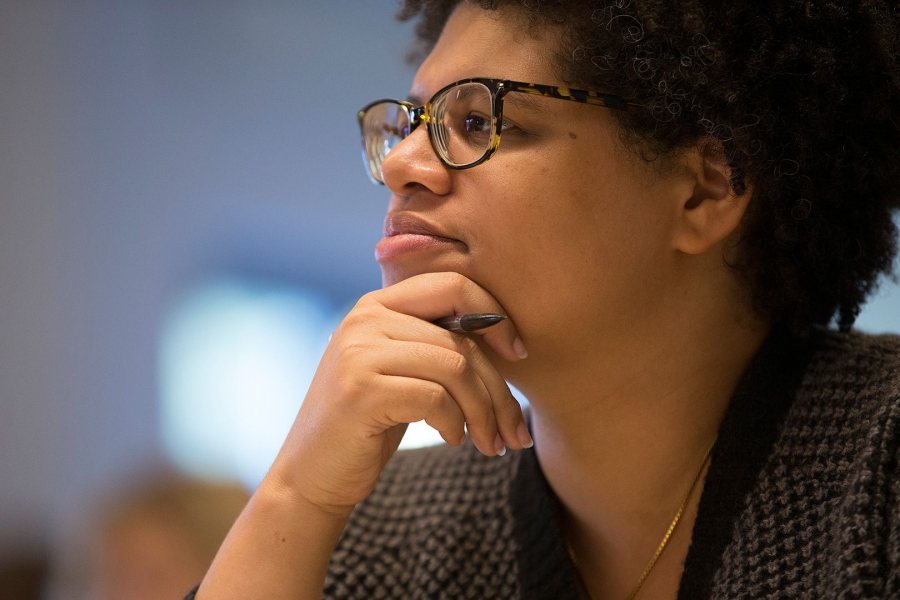 Patricia Akhimie of Rutgers University, one of eight presenters at Bates’ New Approaches to Early Modern Literature and Culture symposium, listens to a presentation on Sept. 26. (Phyllis Graber Jensen/Bates College)

“I don’t want to be accused of having an ax to grind” by bringing current political or social-justice issues into discussions of early modern literature, a Shakespearean scholar told a Bates symposium the other day.

Which was not to say that David Sterling Brown, assistant professor of English at the University of Arizona, wants to bar those issues from the classroom or his students’ awareness. Quite the opposite, said Brown — an African American man who, earlier that morning, had presented a paper subtitled “Black Life Matters in Shakespeare’s Titus Andronicus.”

“I want the students to come to these issues on their own. I don’t want to force-feed them. I don’t want to make them think that I am just depositing my ideas” into those discussions, Brown said. 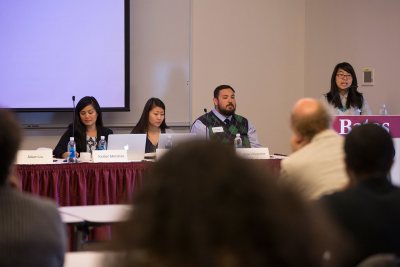 The role of contemporary concerns in the teaching of centuries-old literature was one of the fresh concepts explored during the symposium New Approaches to Early Modern Literature and Culture on Sept. 26. Brown was one of eight young scholars of early-modern literature, all from backgrounds underrepresented in the field, who shared research and professional insights at the symposium presented by the Department of English at Bates.

Another presenter was Madiha Hannachi, a native of Tunisia and a doctoral candidate at the University of Montreal. She studies Shakespeare’s presence in the Arab world, an unusual topic in early modern studies. “This kind of symposium is empowering for young scholars coming from underrepresented groups, and who have interesting views and refreshing research,” she said.

When Hannachi heard about the symposium, “I felt like it represents me. I’m part of an underrepresented group in North America and I work in a field that is also underrepresented,” Arab perspectives on Shakespeare. “This event really spoke to me.”

A mix of faculty and graduate students, the presenters came from across the U.S. as well as Canada. In their formal presentations, six of the eight dealt in some way with Shakespeare. (Playwright Christopher Marlowe and poet Philip Sidney also got their due.)

Patricia Akhimie of Rutgers University–Newark revealed a surprising equivalency between racial ideology and the roles of the abused, bruised twins both named Dromio in The Comedy of Errors. “Racialist logic can rationally tie any somatic mark,” like a bruise, “to any social meaning, even a meaning as complex as identity,” Akhimie said. 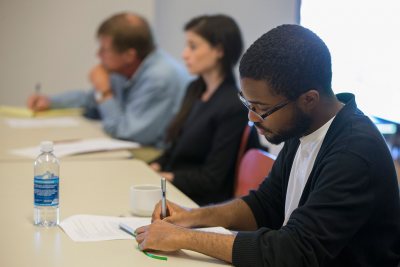 Hannachi took a macro view of the Bard. She explained why productions of Shakespeare in Arab countries involve much more than just text translation — it’s a transcultural process as much as a translinguistic one. Especially fascinating was her description of Sulayman Al-Bassam’s award-winning The Al-Hamlet Summit, a 2002 adaptation of Hamlet that represented the title character’s “complete immersion into Arab culture” and the present day.

In contrast to the tightly structured research presentations, morning and afternoon roundtable discussions generated dynamic examinations of the context in which early modern literature scholars — especially those who are bringing needed diversity to the field — do their work.

Topics arising during the afternoon roundtable included the legacy of old literary categories that continue to shape the profession — even through such factors as the names of professional journals — while failing to accommodate today’s breadth of perspectives on race and gender; student interest in English literature and in humanities broadly; and the point during the course of a semester when rising student engagement brings joy to the work.

A theme that arose in both roundtables (and, in the morning, led to David Brown’s remark about grinding axes) was anachronism and “presentism” — the introduction (or intrusion, as some old-school academics see it) of contemporary concerns into examinations of old literature.

“I’ve noticed with our papers today that many of the period-specific questions we’re asking are motivated by our own concerns about this current historical moment,” said Roya Biggie, a doctoral candidate at the City University of New York Graduate Center. (Her research focuses on early modern treatments of ecological and interspecies relationships.)

“At least in my experience, when I try to make those connections explicit, I’ve been criticized for being anachronistic,” Biggie said. “And there is a certain anachronism that goes with that.

“But at the same time, I personally think it’s worth it because, why ask irrelevant questions?” 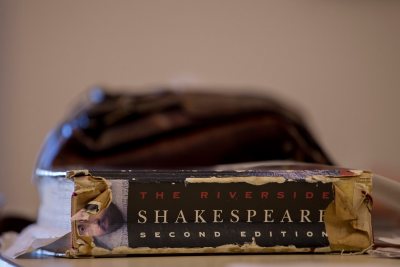 With Shakespeare dominating the presentations at the New Approaches to Early Modern Literature and Culture symposium, it was wise to come prepared. (Phyllis Graber Jensen/Bates College)

The symposium came about because Bates’ English department “wanted to educate itself about new scholarship in the field,” said Therí Pickens, associate professor of English, who organized the symposium with English faculty colleagues Eden Osucha and Sylvia Federico.

The presenters’ “new approaches were wide-ranging,” said Pickens. “One of the takeaways was definitely an expansion of the categories with which most scholars frequently work — race, gender, sexuality, etc.”

The symposium, she said, “was an amazing opportunity for professional development, research collaboration, and pedagogy for both the presenters and the department.”

The presenters were selected through a competitive process. “We tried to create a conversation among them that was exciting and groundbreaking,” Pickens says.

“We also paid attention to scholars who are underrepresented in the field. It was important to us to get voices who were embodying and researching new perspectives.”

Support for the symposium came from the New Scholars Series, an Office of Equity and Diversity initiative that brings scholars from historically underrepresented backgrounds to Bates.