A replica of the Agamemnon Death Mask hangs in the Pettengill Hall office of Associate Professor of Classical and Medieval Studies Lisa Maurizio.

“When I look at the mask,” she says, “I think of the way knowledge and beauty from thousands of years ago get passed on — through mistakes, imitations, and education; through teachers and students who remember the past and in doing so remember each other.” 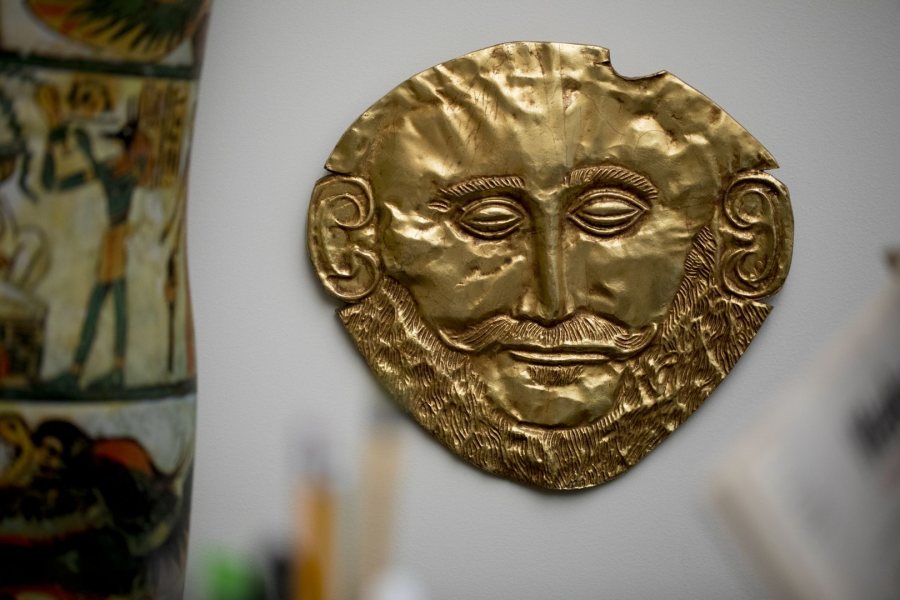 To that point, “Agamemnon Death Mask” is a misnomer, Maurizio explains. Made of gold, the real mask was found in a Mycenaean grave in 1876 by the “notorious” archaeologist Heinrich Schliemann, who “claimed it belonged to the legendary Greek king Agamemnon.” The mask actually dates from around 1550–1500 B.C.E., an earlier period than Agamemnon’s, so it’s not his. “But the name stuck,” she says.

The replica mask once belonged to Professor Emeritus of History John Cole, who, upon retiring and moving out of his Pettengill Hall office, gave it to then-student Andrew Carranco ’14, taught by Cole and Maurizio as a double major in history and in classical and medieval studies.

In the spirit of his academic majors, Carranco decided that history is “something to be shared” and that the mask would “find a better home” with his major department, so he gave it to Maurizio.