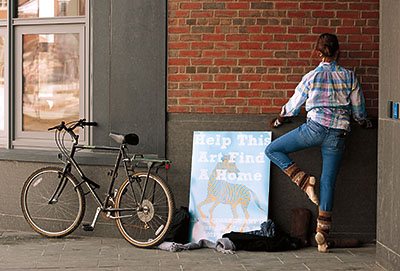 Sociology professor Heidi Chirayath wondered what she was doing at an early meeting of a campus group formed to advance the arts at Bates.

All the others attending were faculty and staff involved in teaching and practicing the arts in myriad ways. After they introduced themselves, it was Chirayath’s turn.

“I said, ‘Well, I’m a sociologist with a background in dance and voice and musical theater and violin,'” she recalls. “I was one of those arts kids in college.” That interest led her to join the discussion about the future of the arts at Bates, but at that first meeting she had to wonder: “What can I do as a sociologist?”

Plenty, as it turned out.

As discussions proceeded from their 2007 beginnings to now, she ultimately spotted a two-birds, one-stone opportunity: Why couldn’t students in her methods class survey the student body about their interests in the arts — a process that would both elicit valuable data and provide valuable field research experience to her own students?

The greater context for Chirayath’s 2009 class project is the current institutional planning initiative that President Elaine Tuttle Hansen announced two years ago (“Bates Matters,” Fall 2007), describing the initiative this way: “We’re not proposing the kind of…planning that produces a fine document that sits on a shelf. We are interested in thinking creatively, in the spirit of mutual helpfulness.”

In spring 2009, Hansen’s collaborative effort hit its crescendo as campus teams issued preliminary recommendations in three areas: “Learning at Bates”; “The Natural Sciences and Mathematics in the Liberal Arts”; and “The Arts in the College and in the Community.”

Supporting the arts initiative, Chirayath’s students in Sociology 205, “Research Methods for Sociology,” designed surveys that they administered to 320 students this past winter and spring. They also conducted 31 interviews, observed audiences at 96 campus arts events, and examined arts coverage on 33 collegiate Web sites and in umpteen issues of The Bates Student.

They polled their peers at Bates for information often assumed but rarely measured: Who attends arts events on campus? How well does Bates publicize its events? What are the dreams of Bates’ arts community?

For students in the class, conceptualizing the project, then gathering and interpreting data from the field helped connect the dots between everyday life and phenomena described in journal articles. “It’s been really eye-opening to see all that goes into drawing those conclusions,” says sociology major Emma Posner ’11. “It definitely helped me understand what goes into a sociological study — and in a way that’s been really relevant for our lives at Bates.”

The project was eye-opening in more ways than one. Some students in the class were surprised to find that poetry readings or orchestral concerts even occur at Bates. And students who observed the audience at a classical piano concert by 94-year-old Bates artist-in-residence Frank Glazer were especially surprised, even discomfited, to find themselves amidst an elderly, well-dressed audience.

More comfortable for observers and observed were student a cappella concerts — the Bates cultural events most popular with students, according to Chirayath’s survey. Seventy-four percent of respondents claimed to attend them, a likely testament to the power of friendship. The College’s six a cappella groups consist only of students, and supporting the creative work of friends was the primary reason students cited for attending events (see “Go Figures,” page 9, for more survey findings).

Surprisingly to some, the survey found that athletes were neither more nor less likely than non-athletes to participate in campus arts events. Not an earthshaking revelation, but one that did throw a little light on the perception, at Bates and everywhere, that athletes and artists are like Mars and Venus — with the athletes from the Red Planet getting most of the glory.

“A lot of students reported on how being an athlete is kind of the mainstream cool thing to do,” says Posner, “whereas being an artist involves less of a sense of solidarity and fraternity.”

Still, Bates athletics does give the arts community something to aspire to. Consider a notion recorded by Chirayath’s class at a February listening session that drew a full house in Muskie Archives: that athletics “has successfully permeated the culture of Bates, through its strong student participation, role in admissions, and connections with alumni.”

Chirayath’s students presented their findings in April to the planning group charged with the Arts in the College initiative, which made its preliminary recommendations, including calls for substantial new investment in faculty, staffing, and facilities, to President Hansen in May. The body of work, Hansen says, symbolizes a 21st-century liberal arts college at its best, with “stronger relationships across old lines.”

The unusual prominence of the Arts in the College initiative was typified by a student-organized Art-In last spring. Strongly reminiscent of a 1960s arts festival — it was a happening, man! — the event used Memorial Commons as a venue to showcase Bates performances, arts organization presentations, and participatory artmaking. It was a vivid reminder of the wild energy that students bring to the arts at Bates. And that was something Chirayath had in mind, too.

“It’s easy for people to think, it’s the arts faculty that is pushing some kind of agenda,” Chirayath says. “And I thought, student voices here are really key.”