Fereshetian, head coach of men’s cross country and track and field at Bates, was talking about Rob Gomez ’05 and the acclaim his former runner has earned for creating a defining moment at a prestigious Maine road race on Aug. 5.

With the finish line of the 10-kilometer TD Bank Beach to Beacon race in sight, Gomez slowed up to help a stricken fellow runner, Jesse Orach, get up and finish the race. Grimacing as he steadied Orach’s nearly dead weight, Gomez kept Orach, who was suffering from heat stroke, upright as he lurched the last few yards.

Although the pair were running in 22nd and 23rd place overall at the time, the stakes were still sky-high: Whoever finished ahead of the other would win the coveted men’s Maine-resident division of the race. And as they came to finish, Gomez stopped short and let Orach literally fall into first place. Then Gomez walked over the finish line, second. 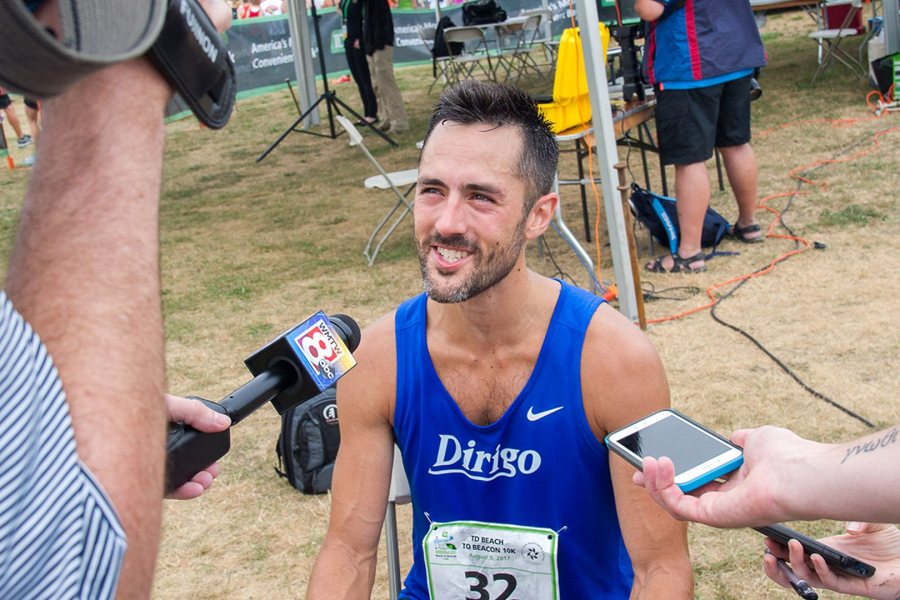 The win was Orach’s second straight in the Maine division. For Gomez, who lives in Windham, the runner-up Maine finish was his best in 10 tries.

For helping the fallen runner, Gomez is being widely praised as a standup guy, and his deed — call it smart sportsmanship — has sizzled through social media and the news media.

The post about it on the Beach to Beacon Facebook page has been shared 643 times, prompting 5,895 likes/loves/wows and attracting 229 comments. An Associated Press story has run in all 50 U.S. states and been seen by millions of readers.

Context matters, and this wasn’t your typical community road race filled with baby strollers and dogs. Founded by Olympic-gold marathoner Joan Benoit Samuelson, the Beach to Beacon attracts 6,800-plus runners each year, including Olympians and world champions who headline the 35-runner professional field.

“Rob respects and honors his sport,” Fereshetian says. “He knows exactly who he’s racing against.”

And Gomez and Orach, both native Mainers, weren’t chugging along in 4,001st and 4002nd place, either.

Orach, a 2017 graduate of the University of Maine, was one of New England’s best college runners, and Gomez has been a top Maine road racer in recent years. He won the 2013 Maine Marathon and has two top-40 finishes at the Boston Marathon.

Coming around a final bend before the home stretch, Gomez only had a second or two to see that it was Orach on the ground and even less time to decide to pull him up. Still, his decision was an informed one. 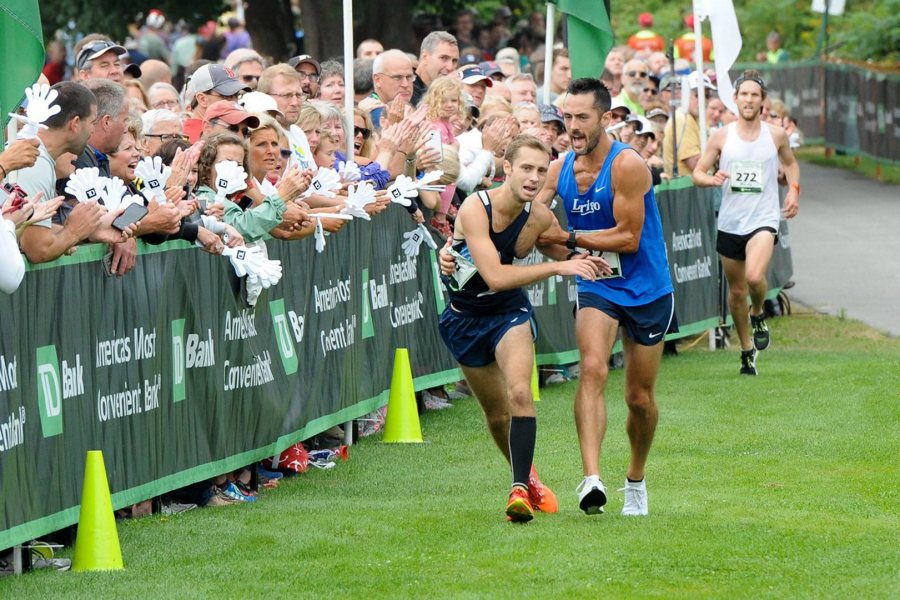 “Rob respects and honors his sport,” Fereshetian says. “He knows exactly who he’s racing against. He and Jesse had just met the day before, but Rob knows exactly who Jesse is, and he know Jesse’s not just some guy he’s running next to.”

Like many great competitors, Gomez is a student of his sport. “Going into the race, you understand the runner’s body of work. You understand what he’s done,” Gomez says. “Jesse had a very good spring track year at UMaine. He was the favorite, and I was maybe his best competition.”

The race played out that way. “The first mile, I stuck with him,” Gomez says. “Then he pulled away. As a runner, I’ve done enough of these to know that it wasn’t going to be my day.”

Gomez looks at it this way. “Jesse’s performance needed to get the respect that it deserved.” Had Gomez passed Orach by, the result would “have been a hollow victory. I would have lamented the fact that I had won; it would have left a bad taste had I won in that manner.”

Since Saturday, Gomez has played out other scenarios in his mind. Of course, he’d have “no problem beating the pants off him in normal fashion.” And if the two had been neck and neck, “if I had fought to be that close, and if it was my race to win, I would have won it” and let Orach fall by the wayside.

“But within 100 yards from the finish [helping him] was the only thing to do. Because I believed, and still believe, that he had won the race.”

“Rob deserves a medal for what he did, but knowing Rob, he’d never wear it.”

Gomez has downplayed what he did, telling WCSH-TV that “I’m just a normal representative of what the Maine running community is all about,” and telling the Portland Press Herald that “maybe they don’t carry someone, but everyone wants others to succeed.”

Though he professes normalcy, Gomez does run to the beat of a different drummer, and he’s well-known for his distinctively generous, intense, and modest demeanor. As Samuelson told me, “Rob deserves a medal for what he did, but knowing Rob, he’d never wear it.”

“He’s very intense and focused about everything, and he was also one of the biggest supporters and cheerleaders for everyone on our team,” says Mike Downing ’05, a fellow runner at Bates who now owns Mount Chase Lodge on Maine’s Upper Shin Pond.

And while generous acts like Gomez’s occur on occasion in road races, “it’s not going to happen in most running races,” Fereshetian says. When it does happen, “it’s usually the result of the people and personalities involved,” Fereshetian suggests. 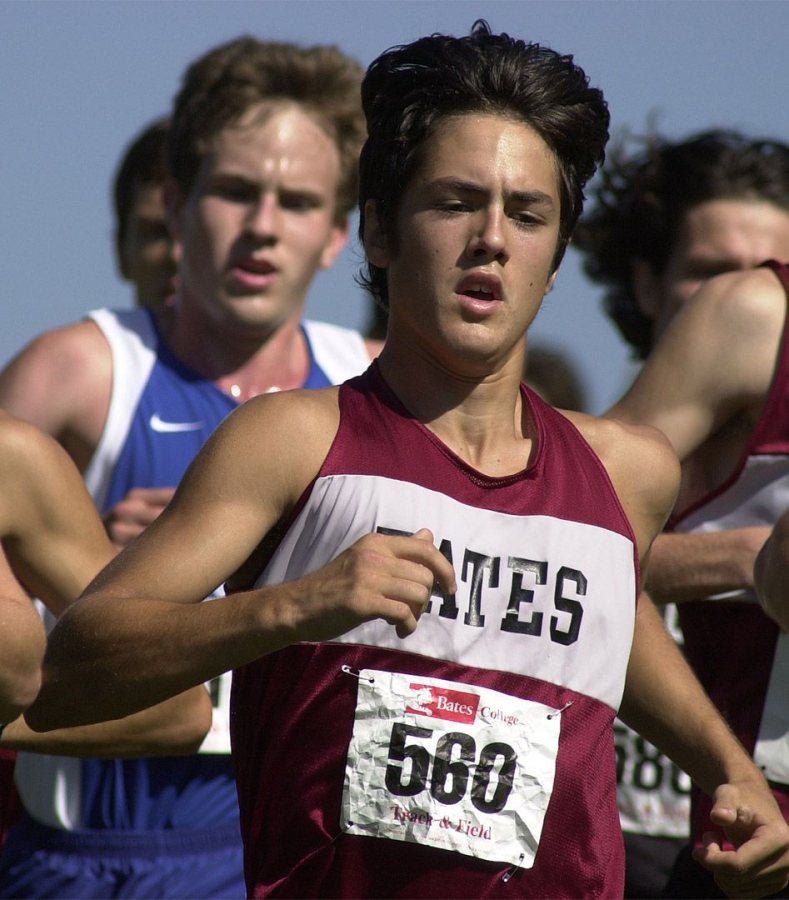 Rob Gomez ’05 runs for Bates as a sophomore in 2002. (Daryn Slover for Bates College)

In that sense, “Rob was a tremendous teammate who cared deeply about the guys on our team,” Fereshetian says. “And I’m sure his teammates would say there wasn’t anything he wouldn’t do for them.”

Downing agrees. “Rob is a great person and friend, and what he did has to do with the person he is.” In other words, the choice to help Orach is not a one-size-fits-all decision. “While it’s hard to say what I would have done, I would have probably decided to win the race and let the medical staff handle the situation,” says Downing. Alluding to the fact that runners can be DQ’d for helping or being helped, Downing believes that approach would be “the fair thing to do for everyone involved in the race.”

To be sure, Gomez’s deed probably reflects a mixture of Gomez’s personality and the culture of long-distance running, which is marked as much by camaraderie as by solo effort.

Beginning in high school and continuing to college, runners, especially cross country runners, “gain a strong sense of team,” Fereshetian says. After college, “in open road races, the only way to get that fellowship and that camaraderie is to recognize that in some form or another, that competitor next to you is your teammate, too. And I think that Rob carries that with him.”

A native of Waldoboro, Gomez majored in chemistry at Bates and was inducted into the Sigma Xi scientific research society as a senior. Today, he’s senior manufacturing engineer at General Dynamics Ordnance and Tactical Systems in Saco. Interestingly, Orach is also an engineer, at the Verso paper mill in Jay, Maine.

For his part, Orach, whose post-race body core temperature was reported to be 107.3 degrees, accepted his victory with grace. “I’m speechless with what he did,” he told the Press Herald, especially because the duo “was kind of vying for that No. 1 Mainer spot, and for him to give that up for me is pretty remarkable.” A bit more than bragging rights was at stake. Orach gets $1,000 for the win, and Gomez $500 for second. (Orach has said he wants Beach to Beacon to combine and split the first and second prize money evenly between the two.)

Joan Samuelson, a Bowdoin grad, parent of a 2010 Bates alumna, and recipient of a Bates honorary degree in 2015, addressed the intersection of winning and sportsmanship. Gomez’ gesture both epitomizes and transcends the sport, she says. “It showcases the very best of the human spirit.”

To be sure, “winning a race is a feather in one’s cap,” she says. “But carrying one to victory deserves a medal of honor that only a few people earn during their lifetime. Rob’s contributions to our sport should have been heralded long ago. His mentoring of young and aspiring athletes has been steadfast, unyielding, passionate, and inspiring.”

In addition to his day job at General Dynamics, Gomez has a running business, Eastern Shore Training, which provides online coaching and training plans for runners. He’s served as vice president and president of the board for Dirigo Racing Club, a premier road-racing club.

“At Bates, Rob loved running with a passion. And it’s great to see him being so engaged in the running community,” Fereshetian says.