“A 16- or 17-hour workday — that’s typical of the summertime,” says Eva Meltzer Murray ’85, who lives on Matinicus Isle, a 2.3-square-mile island 20 miles off the coast of Rockland, Maine.

As one of the few year-round island residents who isn’t in the lobster business, Murray does pretty much everything else — she’s the municipal clerk, the voter registrar, an EMT, an author, and a freelance writer for several newspapers. In the summer she runs a bakery, and in her “spare” time she enjoys blacksmithing, ham radio, and piloting planes.

She’s also in charge of recycling and solid waste disposal, which is what brings her to Rockland on a cool and cloudy day in early August. 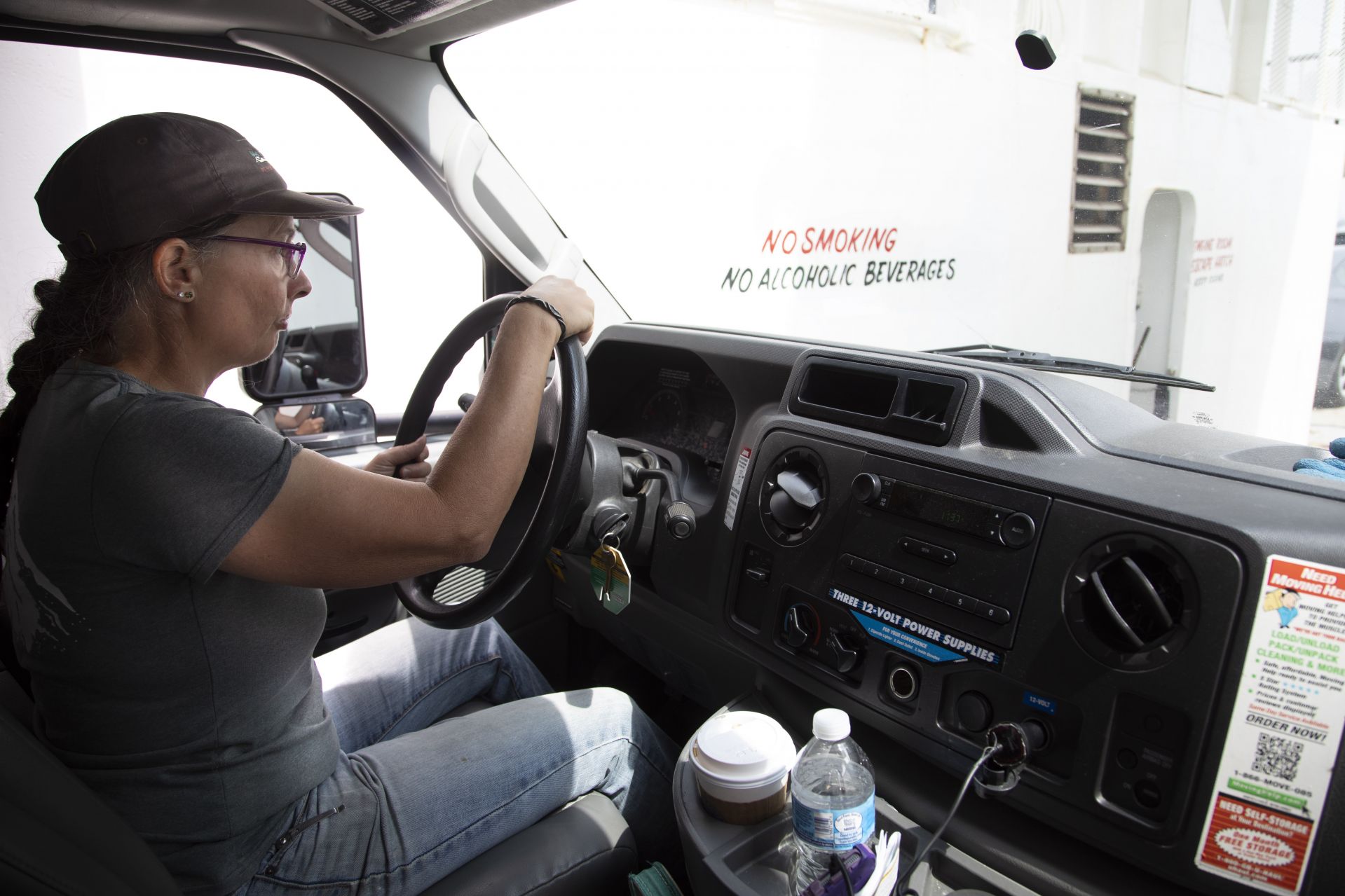 Eva Meltzer Murray ’85 drives a 15-foot U-Haul truck onto a ferry at the Rockland Ferry Terminal on Aug. 8, 2019. The truck is destined for Matinicus Isle to pick up a load of recycling and solid waste. (Theophil Syslo/Bates College)

Every few weeks, Murray goes to the mainland, rents a U-Haul truck, fills it with items individual islanders have ordered (this time a refrigerator and some plastic barrels), and takes it to the island. Once the truck has been emptied, she fills it with bottles and cardboard and, sometimes, miles of plastic lobstering rope, and takes it back to various disposal centers on the mainland.

The process is, like most other aspects of life on Matinicus, logistically challenging. But for Murray, there’s usually a lesson she’s willing to share.

Murray drives the U-Haul (today it’s a 15-footer, but usually she gets a 26- or 36-foot truck) onboard the Everett Libby, the 60-year-old ferry that shuttles residents and visitors to Matinicus about once a week during the summer and once a month during the winter. 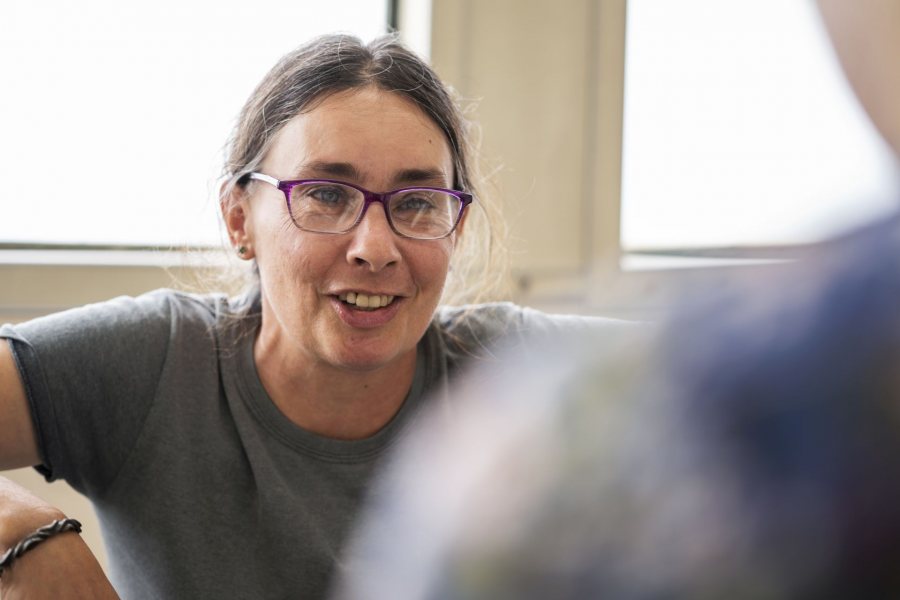 Eva Murray ’85 is interviewed aboard the ferry Everett Libby during its trip to Matinicus.  (Theophil Syslo/Bates College)

Of Maine’s 15 year-round island communities, Matinicus is the farthest from the mainland, and access is exponentially more trying. You can take the ferry, or charter a private boat or plane, but if it’s too foggy or stormy, you’re out of luck. And it can be dangerous: Murray survived the ditching of a private plane in 2011.

“You get people where you’re like, ‘How the hell does this guy know about that stuff?’”

Matinicus is a small community by any measure, but it’s hard to count how many people actually live there. Seventy-five were counted in the last census, and there are about 110 electric meters for homes and workshops. In the summer there might be 200 people staying on the island; in February, as few as 35.

Remote communities have always attracted residents who march to a different drum, and Matinicus is home to “an extremely, oddly diverse group of people,” Murray says. Many are lobster fishers, but there are veterinarians, engineers, doctors — even, Murray suspects, former spies.

“You get people where you’re like, ‘How the hell does this guy know about that stuff? Where did he come from?’” she says. “You have people who have all kinds of professional degrees, lived all over the place.”

Lobster boats sit moored in the harbor of Matinicus Isle. Lobstering is the main industry on the island. (Theophil Syslo/Bates College)

Murray herself grew up in a few different places, largely in New York City and around Rockland. She describes her childhood as working-class, and she felt different from wealthier classmates at Bates.

As a Bates undergraduate, Murray also took education courses at the University of Maine, graduating in three years and then working in a lumberyard and substitute teaching.

She applied for a full-time teaching job in Rockland and “lied through my teeth” when asked if she was a team player, she says. She was preparing to apply for jobs in Alaska before she responded to an ad for a teacher for a one-room schoolhouse on Matinicus.

The lumberyard experience probably got her the job, Murray figures. “They figured I was physically rugged. They didn’t want someone who was going to be too high-maintenance.” 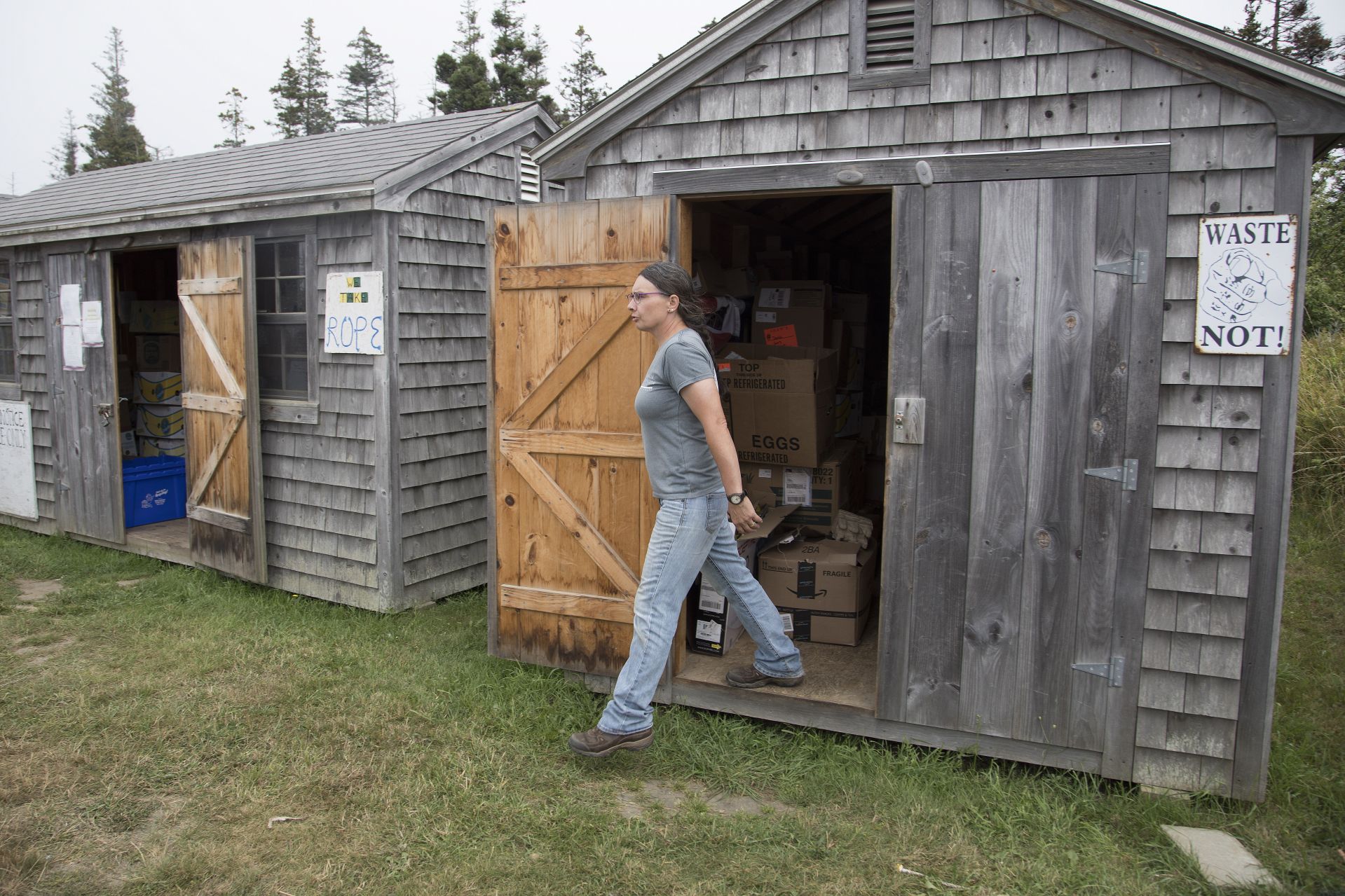 Having arrived at the island’s five recycling and solid waste sheds, Murray prepares to lead the loading of the U-Haul. (Theophil Syslo/Bates College)

Murray fell in love with the island and, perhaps more importantly, with one of its residents, Paul Murray, an electrician who later dealt in propane and handled many of the utilities for Matinicus. She left the island after her year of teaching and considered law school but, ultimately, found she couldn’t stay away.

So she made a life on Matinicus. She and Paul have two children, whom they homeschooled and then sent to Phillips Exeter Academy and Gould Academy on scholarships.

In addition to the jobs she currently holds, she’s been treasurer and school district business officer, and she was elected to the school board. Many of the positions are on a volunteer basis, though with the benefit of compensated (by the Matinicus municipality or other agencies) trips to the mainland and classes. 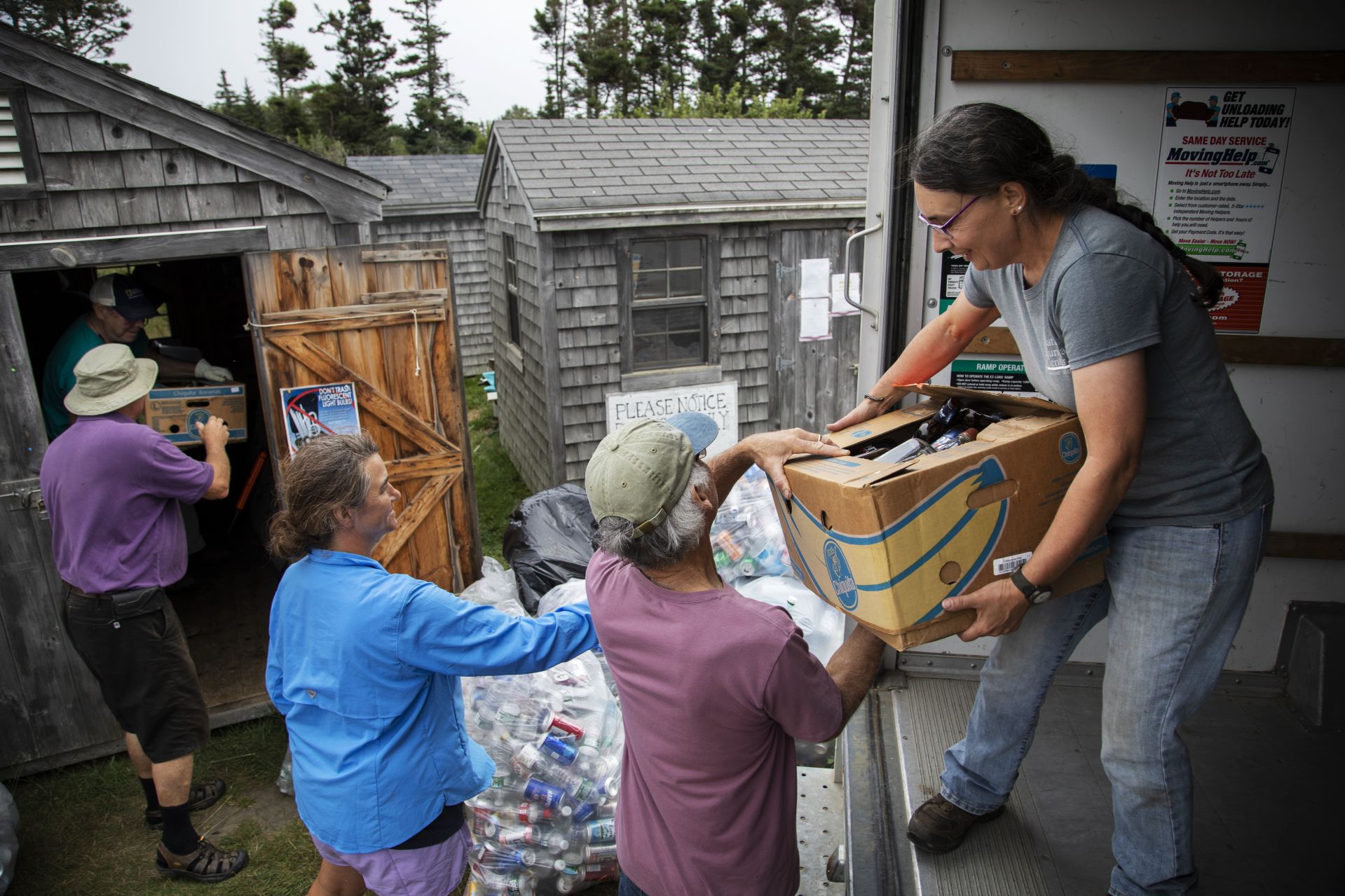 “They send me to a lot of education courses, like hurricane school in Miami,” she says, referring to a FEMA-sponsored emergency response training. “A lot of people go, ‘Oh, it’s so great that you’re willing to volunteer.’ But I get more out of it than I put in, because I like going to school for things.”

For fun? “In the summer I go to Rockland to go to the dump, and then I go have an ice cream cone,” she says. “In the wintertime, I am fortunate enough to have a happy marriage. It would be hard to live there year-round if you didn’t have friends. You either need a good marriage or good friends.”

After what Murray calls a smooth journey on the Libby, Matinicus, hilly and forested, emerges slowly out of the fog. When the ferry enters the harbor lobster boats become visible, then lobster fishers’ workshops on stilts. 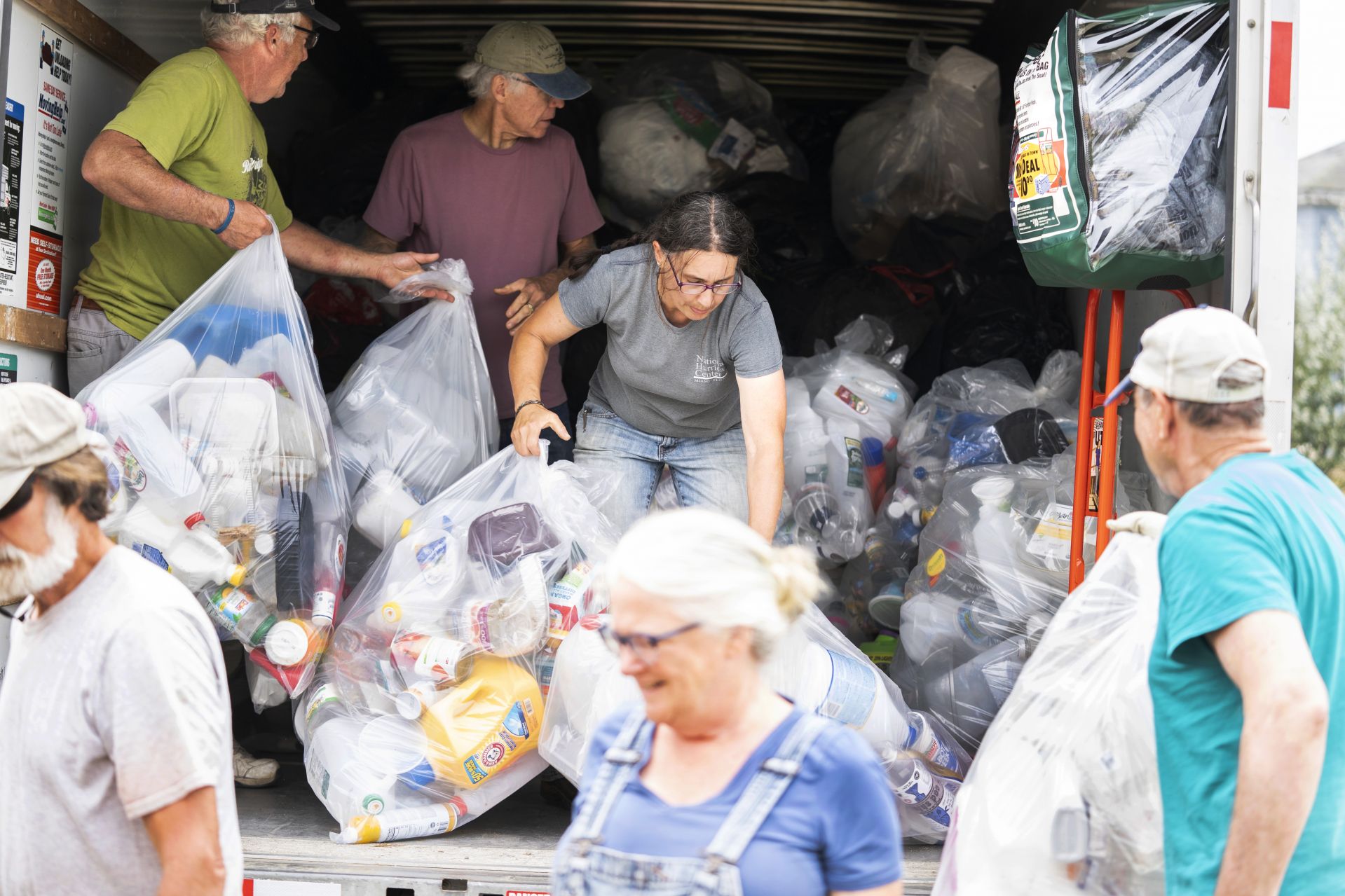 Like many aspects of life on Matinicus Isle, recycling is a community effort. (Theophil Syslo/Bates College)

There’s no downtown on Matinicus, no year-round businesses or formal community centers. Murray lists the buildings that aren’t residential: the schoolhouse, the municipal building, the power station.

“There’s a fisherman that’s trying to do the little fish restaurant,” she adds. “He built that out of a utility shed. There’s a small bed and breakfast. The guy’s half retired. There’s no hotel or anything. We don’t have a store anymore. The post office burned down. It moved into a building that looks like an ordinary home.”

Of course, each lobsterman has a commercial business, as do a lobster buyer and several carpenters, but the only semi-permanent storefront on Matinicus is Murray’s summer bakery. That, ultimately, is what makes her summers so busy.

“Then in the afternoon, I’ve got to maybe cut my grass, maybe teach a CPR course, maybe get a column finished. I want to go to bed as soon as it’s dark out.” 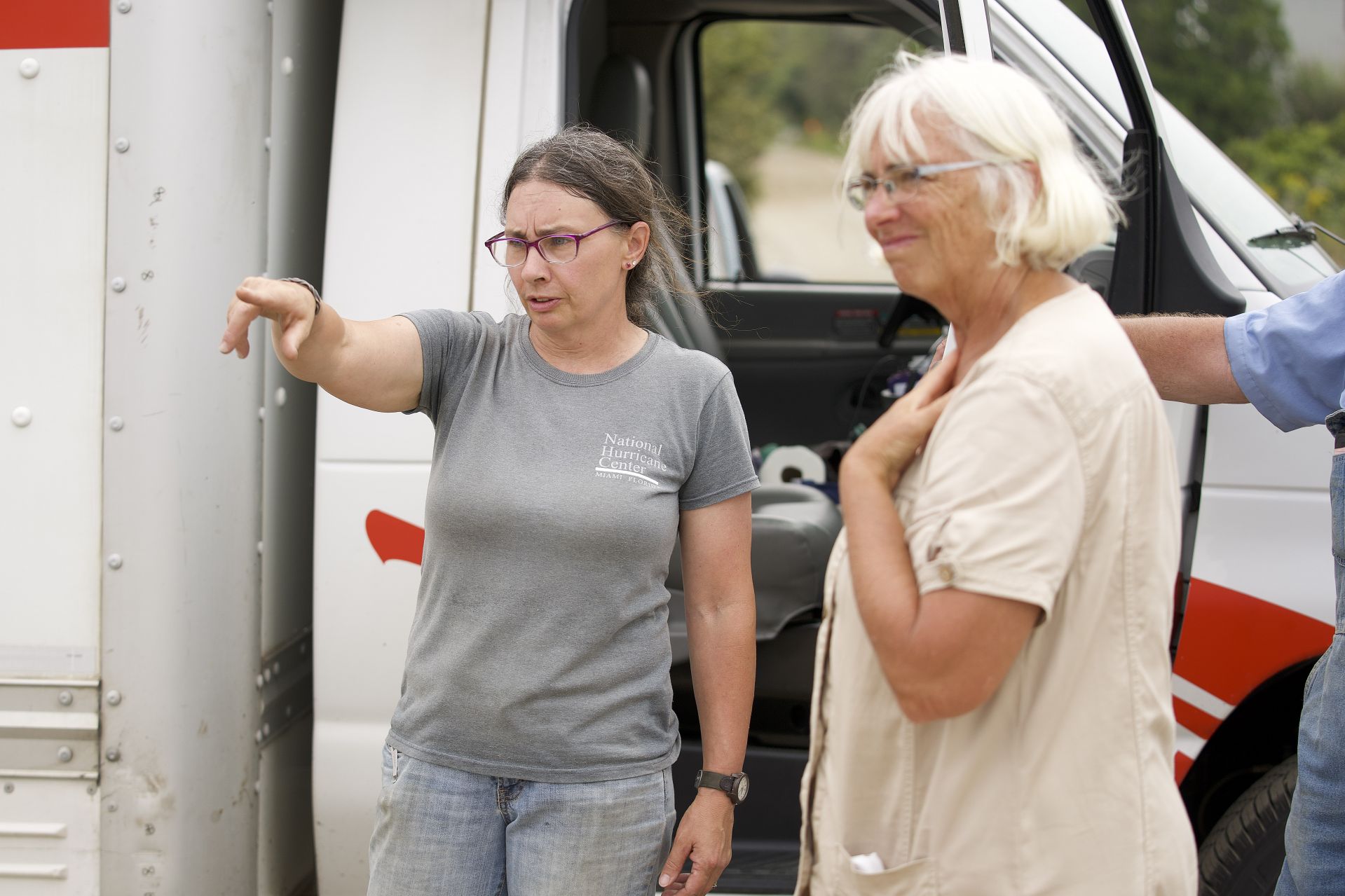 Eva Murray directs the work team during the trash and recycling operation on Matinicus Isle. The island days are long and busy. “I want to go to bed as soon as it’s dark out,” she says. (Theophil Syslo/Bates College)

At the pier, a group of volunteers, including Paul Murray, waits to bring the ferry in. Once Eva has driven the U-Haul onto dry land, it’s go time.

The harbor’s not deep enough for big boats to stay long, so Murray has to get to the trash sheds, load everything up, and get back to the dock in under an hour.

Murray drives the U-Haul up a gravel road. Some of the houses along it look new; others less so. Almost everywhere there are workshops and stacks of lobster traps. Undeveloped land is covered in brush and spruce trees. Disease has killed some of the spruces; fog passes eerily through the needle-less limbs.

When Murray started the recycling program there was only one shed in which to store recyclables and clean, dry trash. Now there are five, one of them new just last week. Next door to the neighborhood of sheds, behind a hedge delineating the lots, there’s a small building that Murray helped set up as a library. 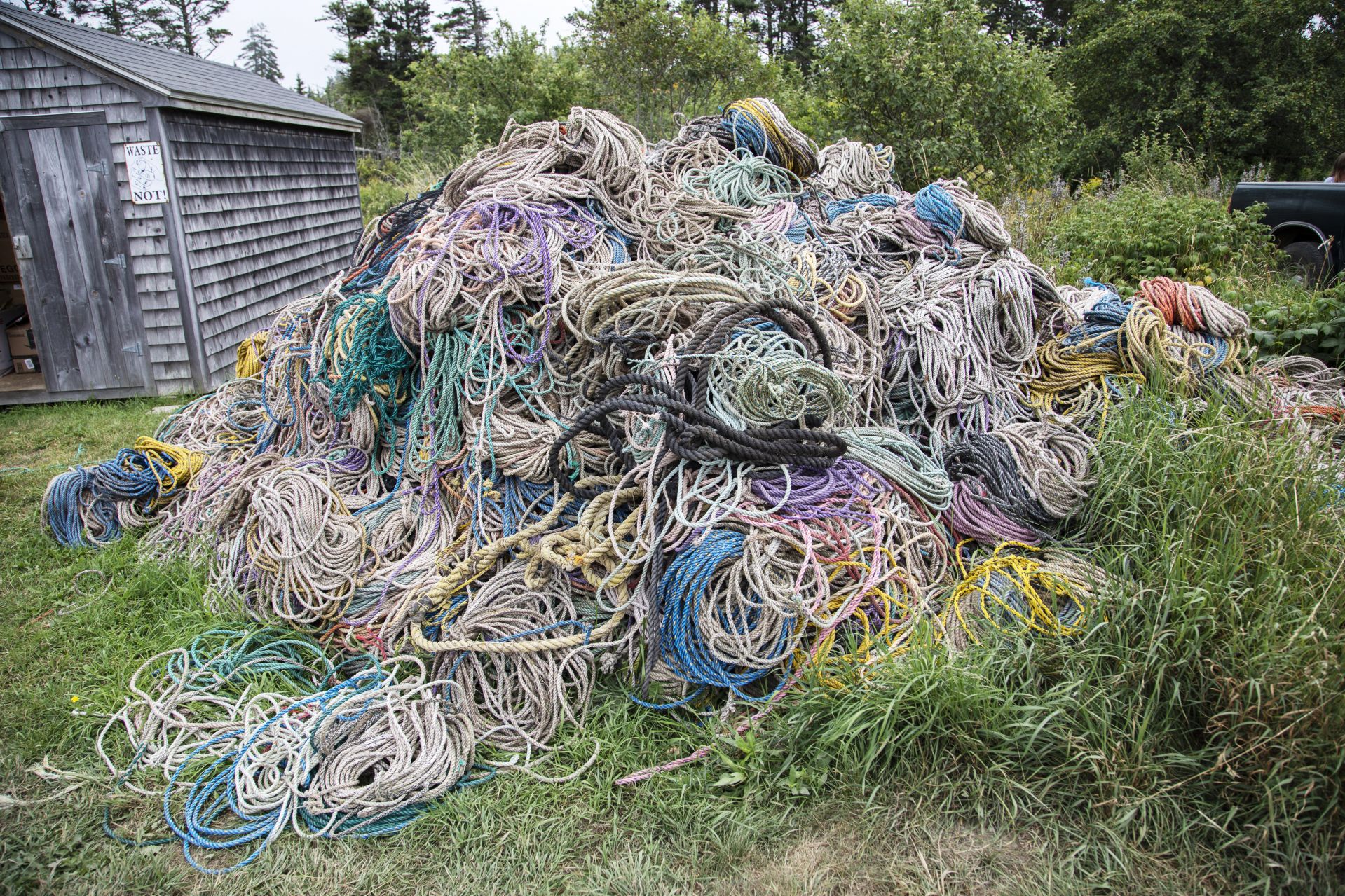 Though not part of this waste trip, old fishing rope also needs to be removed occasionally from Matinicus. (Theophil Syslo/Bates College)

Once the refrigerator and the barrels have been delivered to their new owners, 10 or so residents — a mix of year-rounders and part-timers — converge upon the sheds and, in assembly-line style, pass bags of aluminum cans and newspapers and empty plastic jugs into the truck. Kids play with each other and their dogs nearby.

In 15 or 20 minutes, the whole operation is over, and Murray drives back down to the ferry. Because summer is coming to an end, there are more people leaving the island than came to it earlier this afternoon.

As soon as the U-Haul is tucked in among the other vehicles, the ferry weighs anchor. It’s a well-oiled machine Murray has created.

Murray would be the first to say she’s not a spokesperson for Matinicus. That role would more rightly go to a lobster catcher who grew up on the island, she says. Murray has lived here for 32 years, not a lifetime. 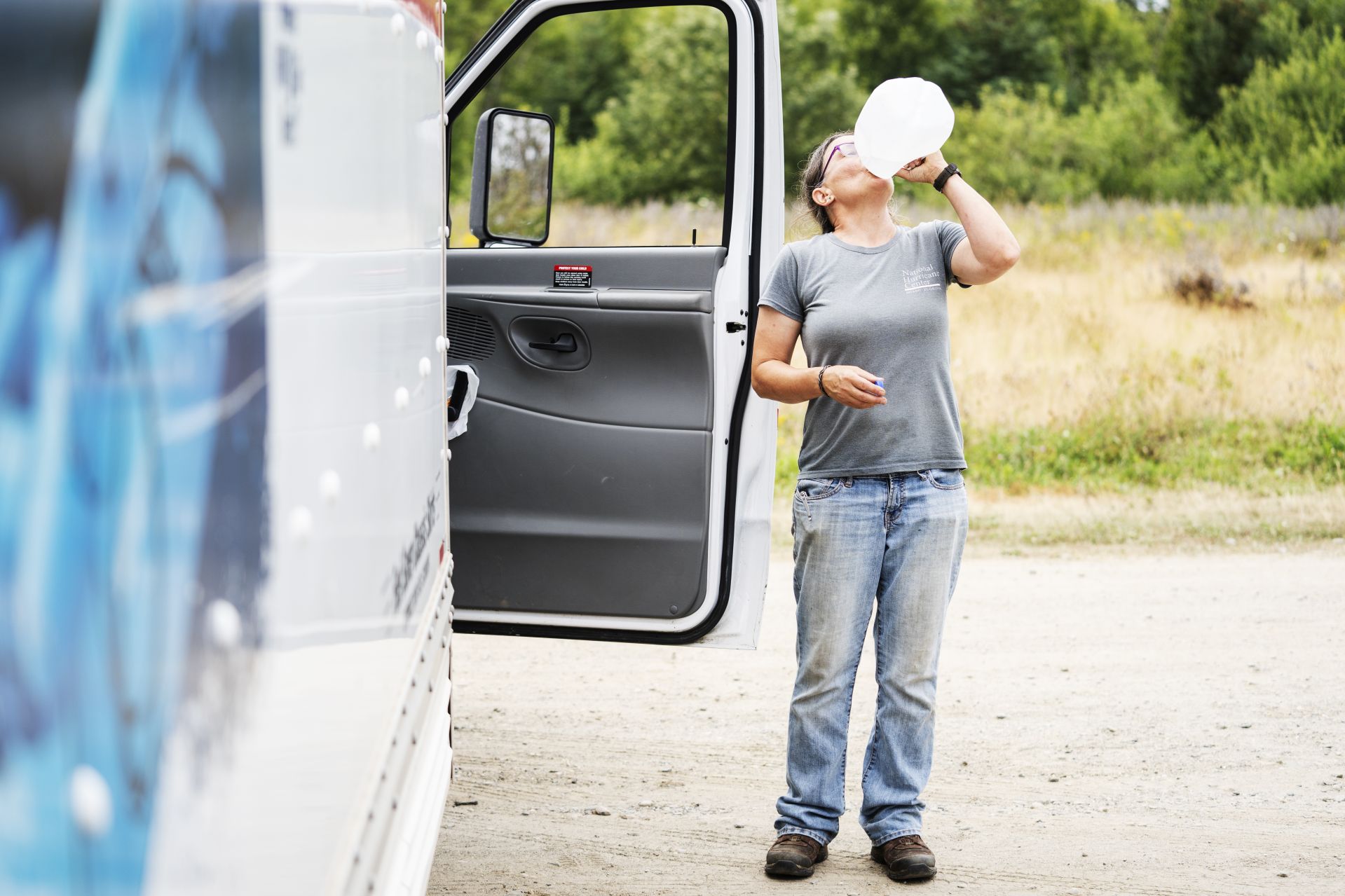 Eva Murray pauses for a water break while leading residents in loading a U-Haul full of recycling and trash. (Theophil Syslo/Bates College)

But the voice she does have, particularly as a newspaper columnist, is strong, and she uses it in part to disabuse curious observers of their preconceived notions of Matinicus.

For example: that Matinicus is a swashbuckling haunt for convicts, vigilantes, and malcontents, a stereotype certain writers have perpetuated. “It makes good fiction,” she says. “It’s insulting in real life.”

“If you want a pizza, you’ve got to make one. If your roof leaks, you better climb up there, or at least your neighbor has to.”

“There are a lot of adults who are running from their own demons,” Murray grants. But, she adds, “If you’re a kid who’s got a stable loving family and you’re a stable member of the community and you know everybody, it’s a wonderful place to be a child. You get to have that old-fashioned go-play-outside kind of childhood that not everyone gets anymore.”

Nor is Matinicus a stomping ground for the wealthy, a place where you should (or even could) park your yacht, or a vacationland fantasy. Murray says people often think of the island as an escape from “the real world.” 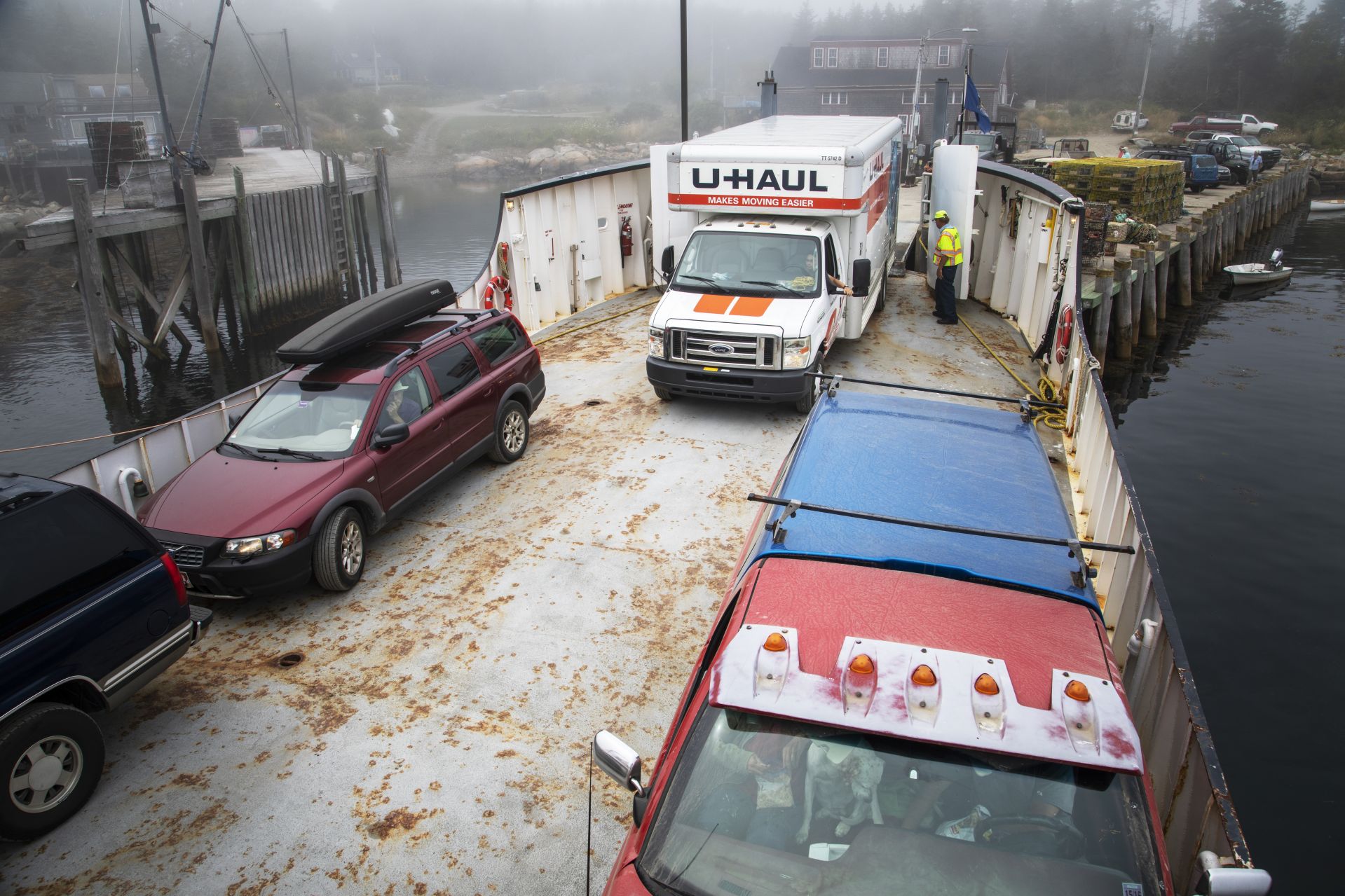 “That expression, ‘the real world,’ has always made the hair stand up on the back of my neck,” she adds. “What could be more real than a place where if you have a problem, you gotta fix it? You can’t just go beep-beep-beep on your smartphone, and someone else will come along and rescue you.

“If you want a pizza, you’ve got to make one. If your roof leaks, you better climb up there, or at least your neighbor has to.”

Murray says she likes the “anarchy” of Matinicus, then adds that she’s only half-joking. “People can do some bad things if they want to, because nobody’s going to stop them,” she says. (The island has no stationed law enforcement.)

“You can have a positive impact, do some small thing for society without being told, ‘You can’t do that.’” 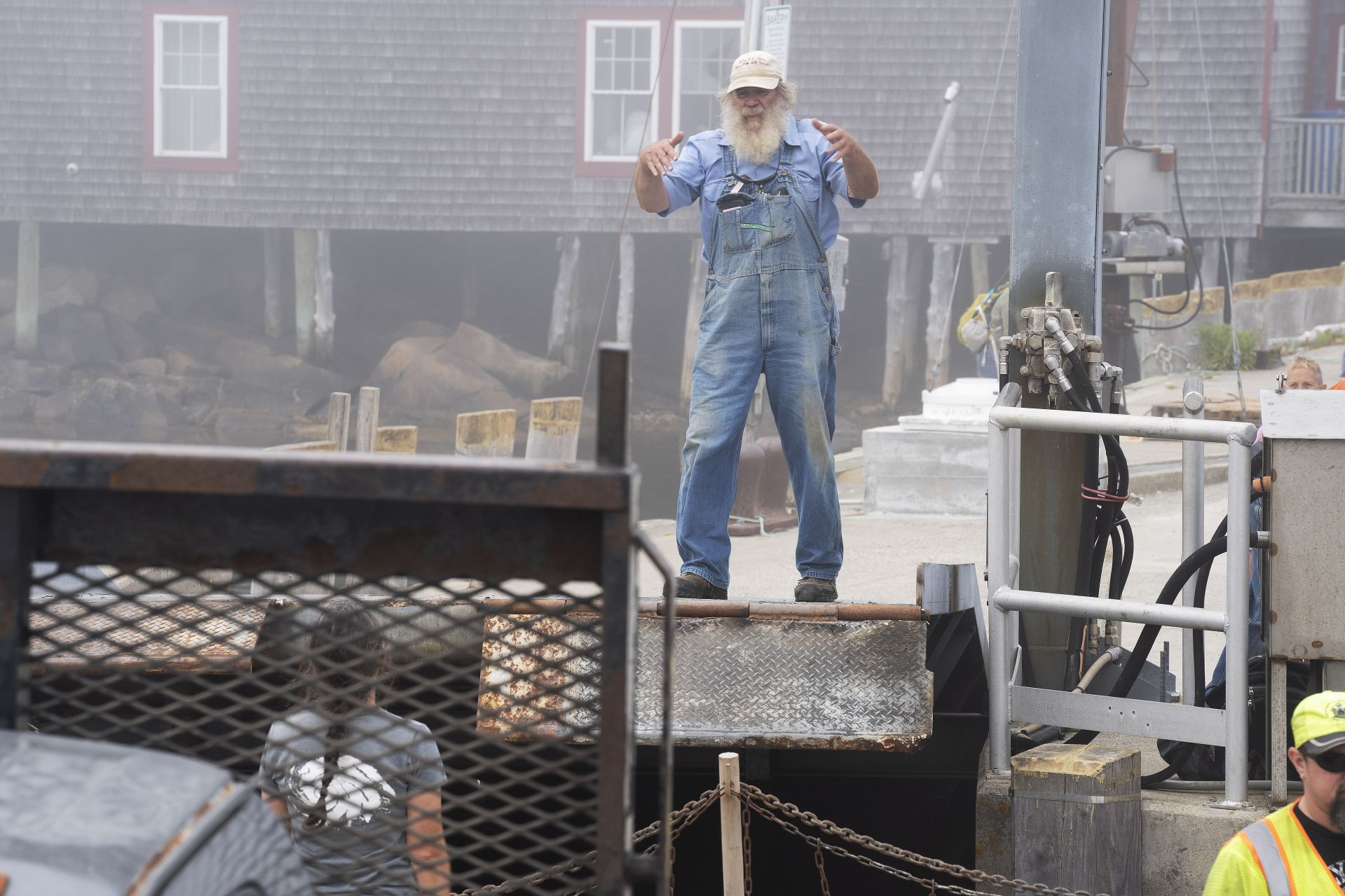