Bud Horne ’49 didn’t start running until he got to Bates. But once he started, he didn’t stop.

Horne wore a Bates sweatshirt as he accepted the Young at Heart Award for being the oldest male finisher. “I wanted to make sure everybody knew I was from Bates,” says Horne, who is president of his class and, as student, was a track captain and a Maine state champion in cross-country.

1. Greet your fellow runners and walkers with a cheery “Good morning!,” or, if huffing and puffing, throw a thumbs-up.

3. Pick up trash and deposit it in the nearest can.

4. Get out of the way of faster runners.

5. Occasionally, slow down and enjoy the scenery.

6. If raining, splash through the puddles with joyous abandon.

7. If on a recreational run with a partner, go slow enough to carry on a conversation.

9. If neither a runner nor a walker, line the route and cheer on the participants.

10. Do not fail to register for the OFN Run/Walk.

Horne has only missed a few of the races since they started 40 years ago at the famed Chautauqua Institution, a 750-acre education center and retreat where he lives year-round. He’s won every race category for his age group, he says.

“I still have all of the shirts,” he says. 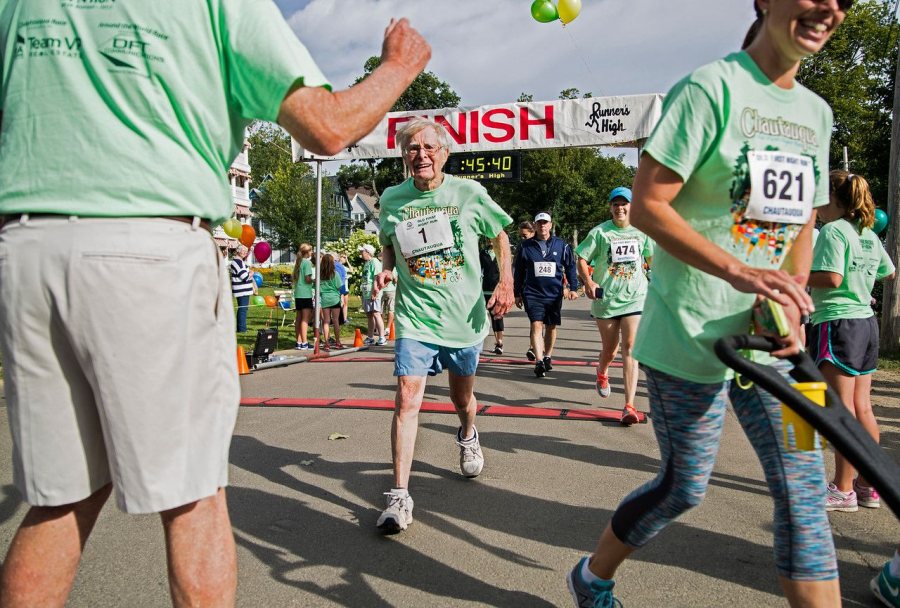 Horne dedicated the race to his wife, Betty, who died in June after 65 years of marriage, and their late friend, Peggy Ulasewicz. Three of the Hornes’ eight children are alumni:  Sandra Horne Marshall ’76, Ian Horne ’80, and Donald Horne ’83.

Competitive runners, of course, need to train and watch what they eat, but Horne refers the recreational runner to his “Ten unofficial rules for runners and walkers,” a letter to the editor published in The Daily Chautauquan. (He originally wanted to call them his Ten Commandments, but the newspaper told him not to, he said.) The Chautauquan recently published an audio slideshow about Horne’s race.

In the past few years, Horne has slowed down, he says. He walked some of this year’s Old First Night race, finishing the 2.7-mile course in about 45 minutes.

Connections: Tale of the Cat