Convocation 2017: ‘A time to take up our work with new resolve’

Notions of “Bates community” are never far from mind when Bates people talk about their college. Convocation 2017, the latest edition of the campus gathering that begins every academic year, gave three speakers the opportunity to offer three distinct perspectives on what “Bates community” means.

During the Sept. 5 ceremony on the Historic Quad, the newly arrived Class of 2021 heard Walter Washington ’19, president of the Bates Student Government, talk about the ways Bates sustained him during a family medical crisis. 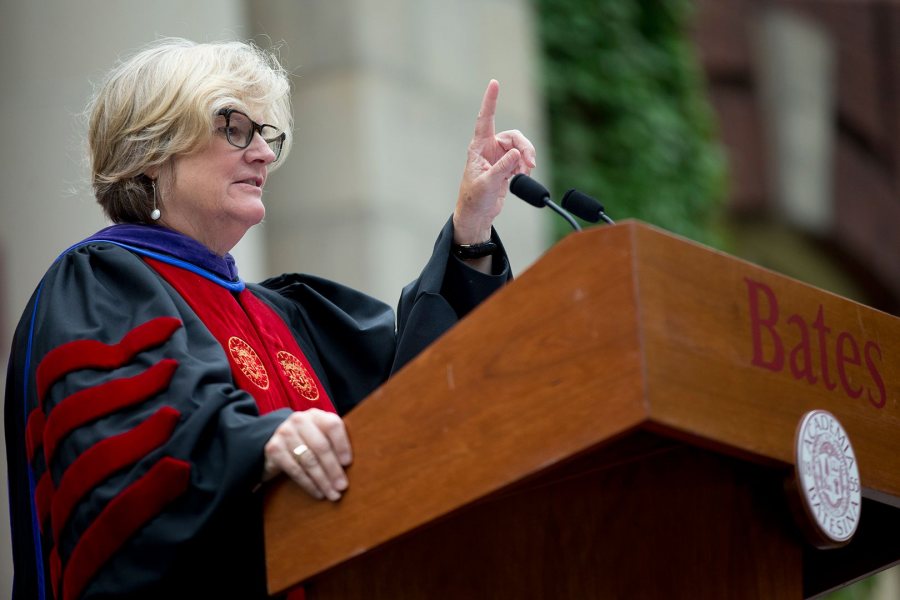 In her keynote address, Professor of Sociology Emily Kane urged the class to make deep and durable connections with faculty — “connections that leave you students wanting to update your former professors on your achievements, your struggles, your moments of joy and your moments of loss, teaching us as much as we taught you.”

Starting the ceremony, President Clayton Spencer held the vision of Bates community up high against the backdrop of the nation’s inflamed political and civic culture, and reminded her listeners that the values that unify this community are needed now more than ever.

“This year, in the midst of our rituals of welcome and celebration, we find ourselves confronted with brazen displays of racism, anti-Semitism, hatred, and violence in Charlottesville,” she said, “with frequent accounts of racially motivated killings in cities across our country, and a national discourse driven too often by impulse rather than informed thought and laced with intolerance, dishonesty, and verbal violence.

“It suddenly feels urgent to bring to consciousness — for ourselves and our students — the values that shape the education we offer here at Bates.”

Spencer used as her departure point the college mission statement, with its invocation of the “emancipating potential of the liberal arts” and its exhortation to engage “the transformative power of our differences.” 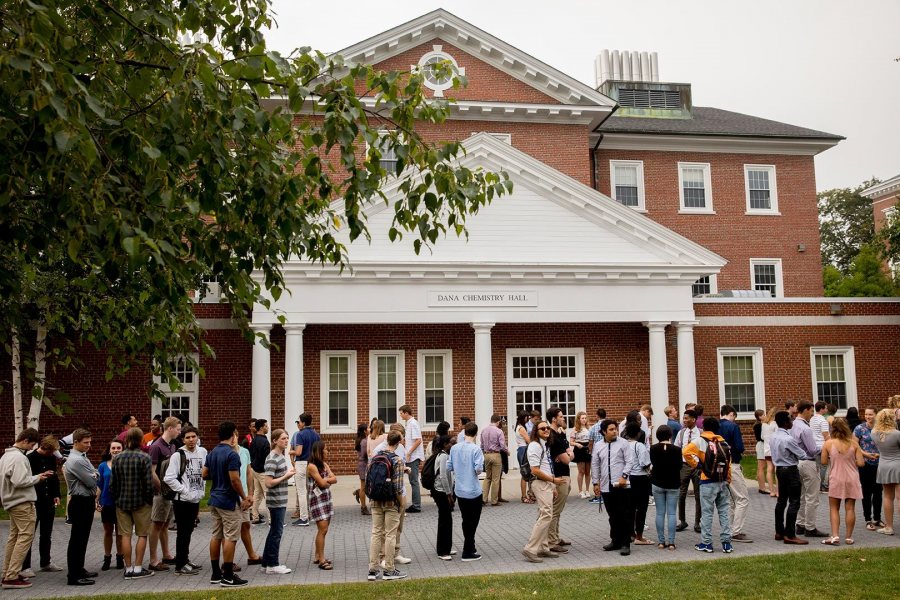 Shown on Alumni Walk on Sept. 5, Convocation Day, members of the Class of 2021 prepare to march in their first academic procession at Bates. (Phyllis Graber Jensen/Bates College)

“We believe in truth,” Spencer said. “We understand that hard problems do not admit of glib or easy answers. Rather they are solved incrementally and over time, often with painstaking work that builds on the knowledge of previous generations and gains strength through the insights of contemporary colleagues.

“This is called expertise,” she said, in a pointed rejoinder to the alt-facts discourse that increasingly prevails in some circles. “It is developed in institutions like colleges and universities, and it is safeguarded by respect for standards of inquiry and expression. Expertise matters, because it brings the promise of making lives — and life on this planet — better.”

She said, “We teach our students to reason from evidence. We believe that facts matter. A college campus is a culture that depends on persuasion and reason-giving, not on authority derived from power or position.”

Noting that Bates’ founding principles insist that all persons must be treated as equal and worthy, Spencer took particular aim at the virulent bigotry that has deranged the American conversation over the last few years.

“We believe that engaging with difference is a powerful force for good,” she said. “In education, it is a source of growth and transformation. …We encourage our students to approach ideas and each other with openness and generosity.”

“We have our work cut out for us,” Spencer concluded. “Never has the humanistic project of the liberal arts been more important. Never has this form of education been more needed — or more challenged.

“This is not a time to lose heart: It is a time to take up our work with new resolve.” 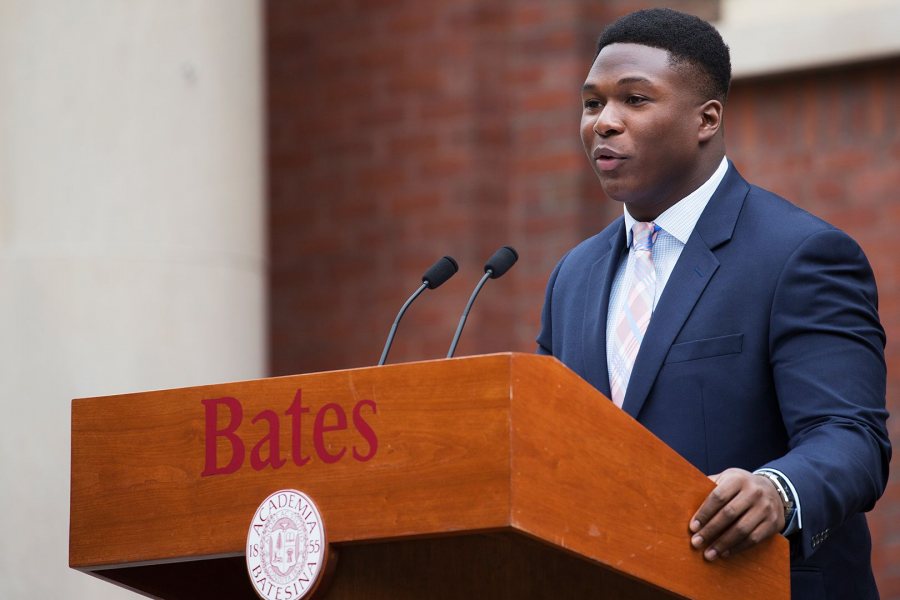 Walter Washington ’19 of Fleetwood, N.Y., president of the Bates Student Government, delivers greetings to the Class of 2021 during the 2017 Convocation, on Sept. 5. (Theophil Syslo/Bates College)

The student government president, the college president said in her introduction, is “a very talented person who is not shy about letting me know what students are thinking and what we can do to make Bates better.” A politics major, football player, Deansmen crooner, and aspiring law student, Walter Washington of Fleetwood, N.Y., introduced the Class of 2021 to Bates in a strikingly personal way.

Washington recounted his mother’s battle with cancer during his last year of high school and first two years at Bates. “Fast-forward to sophomore year, and her good days were off and on,” he said. “Luckily, she was able to string together a few good days during the fall to come for Parents Weekend — and that weekend, she watched her son sing a solo with his newly joined a cappella group and register his first college sack against Williams.

“That was a pretty awesome weekend.”

Washington’s mother was declared cancer-free during his second winter at Bates. But before that point, when the outcome was still in doubt, “there is no way, absolutely no way, that I could have persevered through such an ordeal without being a part of the community that is Bates,” he told the Convocation audience.

“On a larger scale, the true moral of that story is that in the midst of all that success, joy and accomplishment you’ll have here at Bates, I can also guarantee you that there will also be times when you feel like you cannot keep going,” he continued. 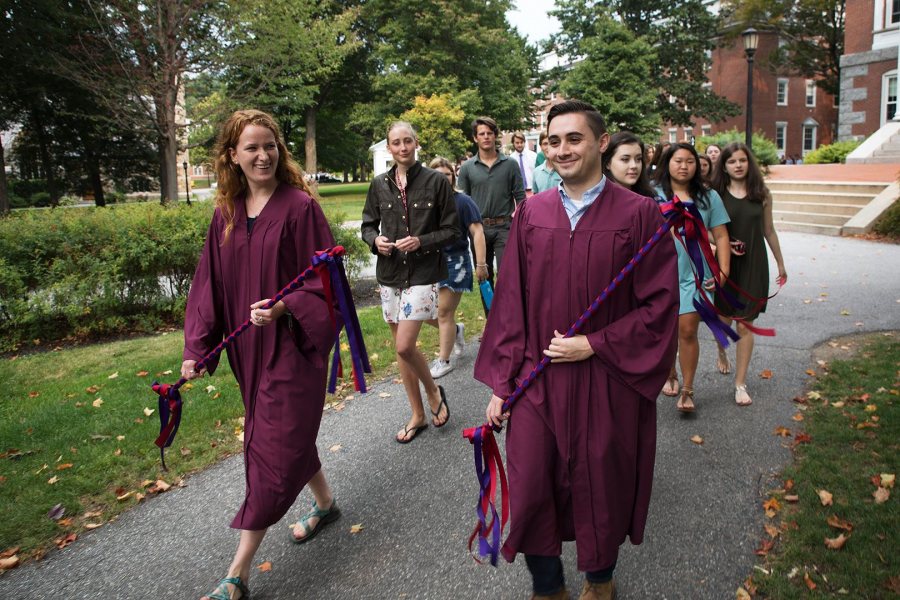 “But take a moment and look at the people to your left and to your right. This place, the people sitting right next to you, the relationships, friendships and extended family you’ll make during your next four years here — it is that that makes this place so special.”

Sociology professor Kane was chosen to address the incoming class by last spring’s departing Class of 2017. Teasing her listeners with a bit of mystery, she started out with a sampling of social media posts and emails she received during the summer — from endearing pictures of a 3-year-old at a ball game to a list of 21 tips for incoming students, offered by a fellow sociologist whose Facebook post netted 14,000 likes.

Kane’s point, of course, was that all of those summer correspondents were former students — in fact, thesis advisees of hers.

“Every faculty member sitting out there with you has their own stories of former students with whom they’ve developed lasting relationships, connections forged in learning together and sharing a passion for a particular set of topics and commitments,” Kane told the Class of 2021. 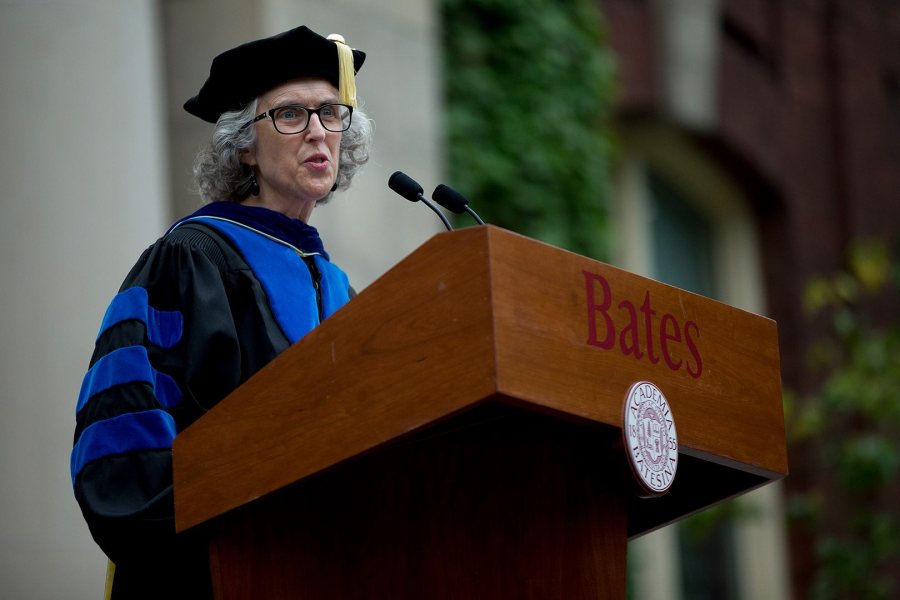 “Like me, all of those other professors got started on forming those relationships by watching strangers arrive on campus as new students.”

Kane said, “That’s one of the joys of working here: Every year brings a new group of strangers with fresh energy and fresh ideas to our campus. …Your energy and insights, your talents and life experiences, bring us all a world of new possibilities.”

About 1,000 people assembled under milky skies for Convocation. Among them were the 510 members of the new class in their first academic procession, following the faculty across the humid quad.

Brittany Longsdorf, multifaith chaplain, gave the customary benediction to conclude Convocation. Likening the new students’ arrival at Bates to a moment of embarkation onto a vast ocean of possibility, she said, “May they find an inner compass that guides their sails toward purpose and meaning.” 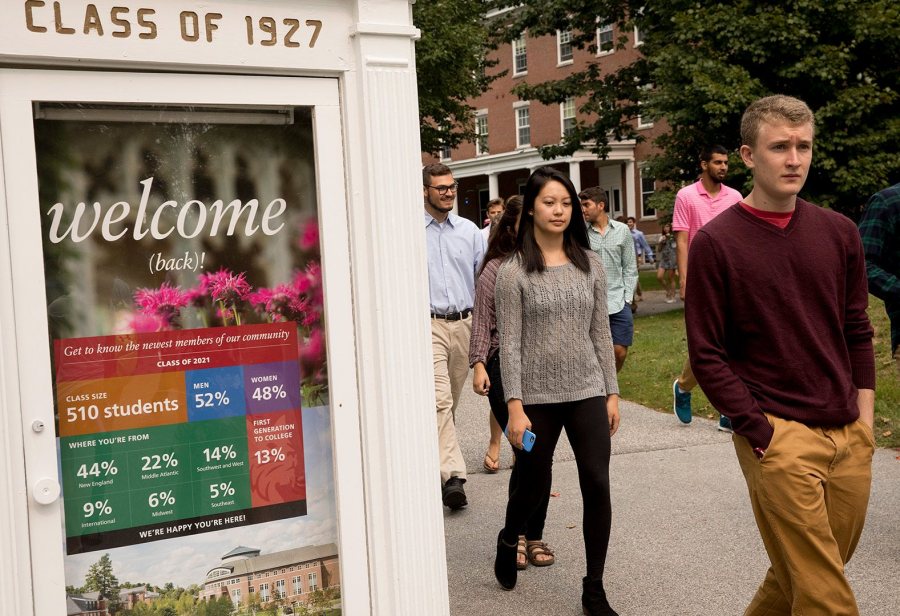 Members of the Class of 2021 process past the Class of 1927 “mouthpiece,” whose message suits the occasion. (Phyllis Graber Jensen/Bates College)